Oil dips after unexpected rise in US crude stocks 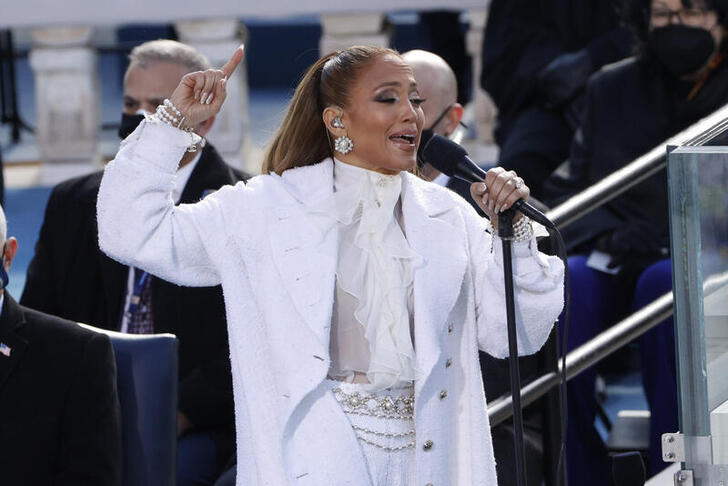 Jennifer Lopez performs during the inauguration of Joe Biden as the 46th President of the United States on the West Front of the US Capitol in Washington, US, January 20, 2021. PHOTO: REUTERS

Pop singer Jennifer Lopez' performance during US President Joe Biden’s inauguration on Wednesday attracted criticism from some Native American viewers who said one of her songs' lyrics referred to the colonial past.

Lopez sang a medley of This Land Is Your Land and America The Beautiful songs, then spoke briefly in Spanish before ending the performance with her own 1999 mega-hit Let’s Get Loud.

The lyrics of This Land Is Your Land, written by American folk singer Woody Guthrie in 1940, include the popular lines: "This land is your land, This land is my land [...] This land was made for you and me."

Some Native Americans in the US, however, took their criticism on Twitter, saying they dislike the song since it carries reference to the country's colonial times.

While some said inauguration of Biden, who promises unity, kicked off with Lopez performing a song celebrating "indigenous genocide" and "stolen land," one user said the song is "epitome of indigenous erasure!"

“This Land Is Your Land” is the epitome of Indigenous erasure!

"In the context of America, a nation-state built by settler colonialism, [the anthem] exemplifies the particular blind spot that Americans have in regard to Natives: American patriotism erases us, even if it comes in the form of a leftist protest song," she wrote for Folklife, an online magazine by the Smithsonian.

"Why? Because this land ‘was’ our land. Through genocide, broken treaties, and a legal system created by and for the colonial interest, this land ‘became’ American land," she added.

This Land Is Our Land is my least favourite song

''This Land Is Our Land is my least favourite song,'' indigenous throat singer Tanya Tagaq tweeted.