A file photo of students in a Islamabad varsity. PHOTO: AFP
PESHAWAR:

The Hazara University located in Manshera has issued a new dress code for the students, faculty and administration staff working there.

According to the issued notification, female students and staffers have been asked to wear an abaya, scarf and shalwar kameez instead of skinny jeans, tights and t-shirts. Excessive makeup, jewels and carrying large hand bags has also been forbidden.

The males have been directed not to wear skin-tight jeans, shorts, chains and slippers. Long hair and pony tails are also not allowed anymore.

Wearing a student identification card was also made mandatory.

The administration staff has been directed to wear neat, clean and presentable clothes whereas the teachers are required to wear a black gown during lectures. They are also forbidden to wear shorts, skinny jeans, slippers earrings and wrist chains.

These aforementioned proposals were approved in the 22nd meeting of the academic council held on December 29 last year under the chairmanship of the university dean.

The dress code has been implemented on the directives of the Khyber-Pakhtunkhwa Governor Shah Farman who is the chancellor of the university.

While responding to queries related to the new dress code, Kamran Bangash, spokesperson of the provincial government and special adviser on education to the chief minister, welcomed the new development and said that students will be able to focus on their studies instead of engaging in a dress competition.

He added that the new dress code will level the field for the poor and wealthy as both the classes will almost be wearing the same kind of clothes. 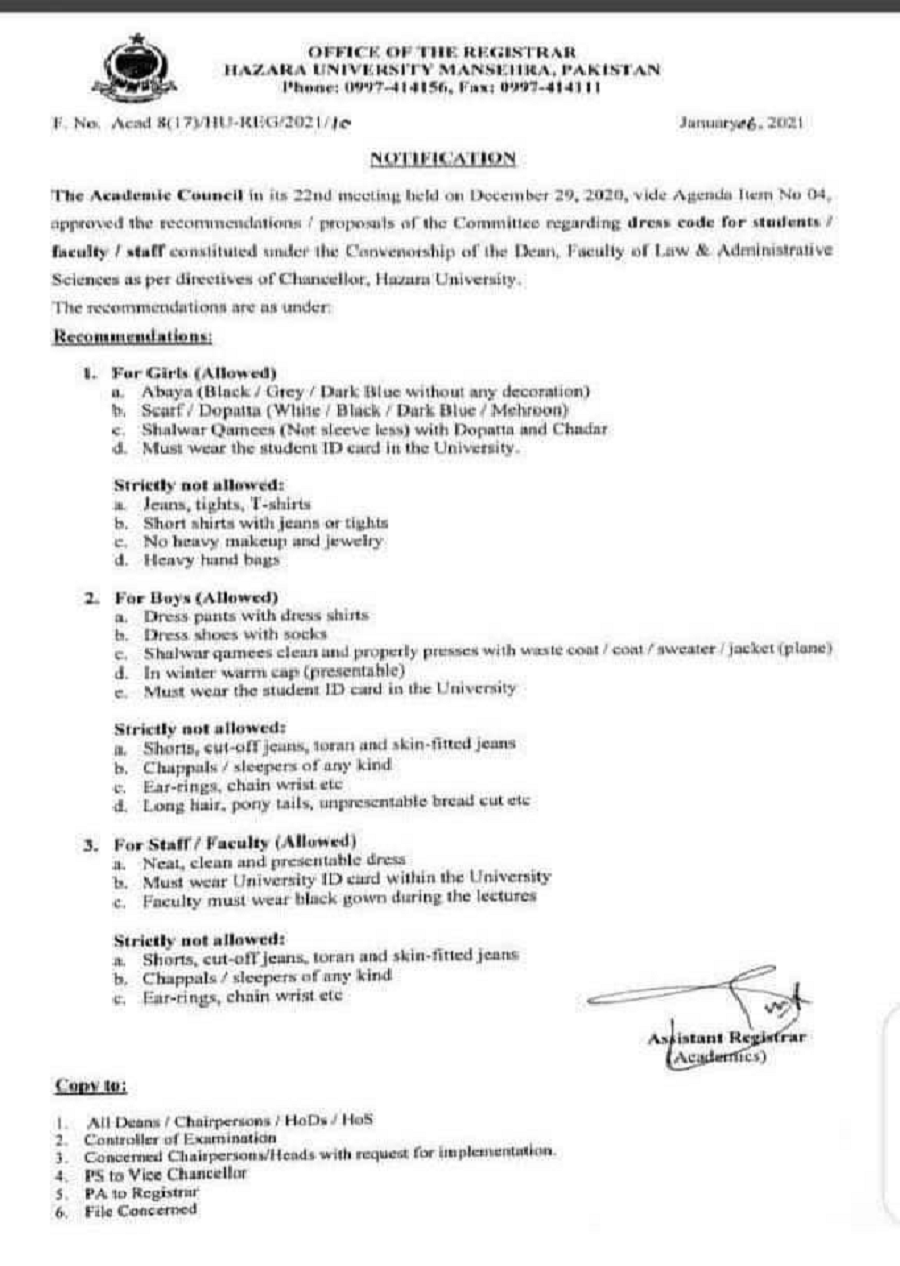 Fully support this. this is not moral policing it is just setting standards that need to be followed in an educational institution. given that you cannot have a uniform this is the closest you can get... I wish we had more of this in other unis as well

Covering your head isn t part of a uniform. That s moral policing through and through.

Nice move never just to teach a b c d only. Moral values are to be followed.

Thats a very good step for integrity of cultural and religious values. Thanks

Bravo to the university which is more interested in how to dress people rather than improving their academic performance. They should seriously pay more attention into hiring a good English professor or atleast spell check a notification which is going around the globe.