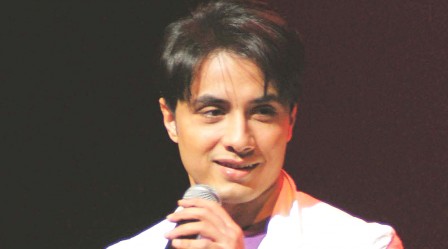 Ali Zafar is all set to perform on ‘Indian Idol’. PHOTO: FILE

“He is going to perform on ‘Indian Idol 5’ and unveil the CD of Tere Bin Laden which is to be aired on 21st June on Sony TV,” Zafar’s manager Sarfaraz Niaz told The Express Tribune.

The show will feature the composer trio Shankar-Ehsan-Loy that has directed music for Tere Bin Laden as the judge.

Hikmat said that Ali Zafar is playing the male lead in his first Bollywood venture and he is the first male Pakistani actor to play a lead role in an Indian movie. The four songs Zafar has sung for Tere Bin Laden have taken cyber media by storm with its catchy lyrics, she said.

The huge fan following of this pop star on social networking websites such as Twitter and Facebook have already welcomed his Indian tunes with overflowing appreciative comments. Making it to Bollywood and performing in the most popular Indian reality show is surely going to quadruple his star status. The show goes on air in the third week of July after his movie release, Hikmat said.

Ali Zafar may be the first male actor to play a lead role in Bollywood but when it comes to performing in India, Zafar joins a list of Pakistani singers like Jal, Strings, Call, Atif Aslam, Junoon, Fuzon, Rahat Fateh Ali Khan, Amjad Sabri and Akash.

Additionally, in the past few years, Bollywood directors have featured many songs from Pakistani singers.

All hail the King of Pop