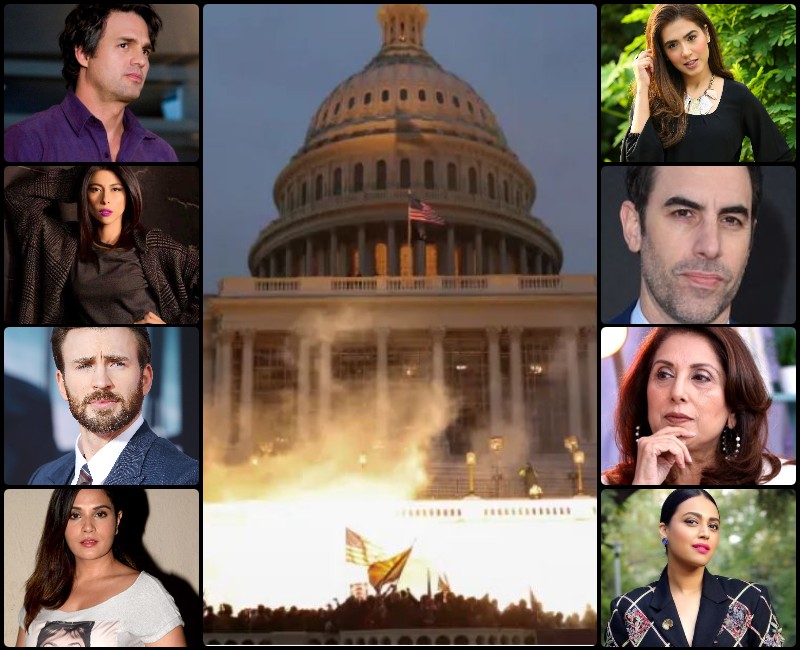 Celebrities from around the world were baffled after supporters of the US President Donald Trump stormed the US Capitol on Wednesday night. Mark Ruffalo, Chris Evans, Sacha Baron Cohen, among other Hollywood celebs, called out the hypocrisy of the police because of the “unfair” and “lenient” way Trump supporters were treated compared to those protesting for the Black Lives Matters movement earlier last year.

Avengers star Evans wrote, “Just think of the carnage had they not been white.”

Just think of the carnage had they not been white.

So many people enabled this.

Mark Ruffalo, who had been tweeting about the entire episode for hours wrote, “Imagine if this was our side. There would be rivers of our blood in the streets and not a single one of us would be armed. This has been allowed.”

Imagine if this was our side. There would be rivers of our blood in the streets and not a single one of us would be armed. This has been allowed. #CoupAttempt

“We call on Congress to support Rep. @Ilhan’s pending Articles of Impeachment against President Trump, and also Rep. @CoriBush's resolution to expel Members of Congress who are opposing the certification of lawful election results.” https://t.co/R34IXSQoRp

Is that FINALLY enough for you to act?!

It's time to ban Donald Trump from your platforms once and for all! pic.twitter.com/4oWoiMu0eC

Meanwhile, Frozen star Josh Gad said it was “either a dereliction of duty by the Capital Police or a complicit desire to not plan for the known threat of chaos today.” He added, “Either way, this is inexcusable. If you can be prepared for imaginary ANTIFA protestors, you had no business not prepping for these actual terrorists.”

Is this how empires fall? #Capitol #WashingtonDC

Indian celebrities including Richa Chadha, Swara Bhasker and Lisa Ray, among others, also tweeted against the storming on Capitol Hill and the treatment of the rioters. “How were they allowed to go this far? Where are the guns and sophisticated machinery that peaceful Black Live Matter activists were faced with?” wrote Bhasker. “What mob anarchy looks like,” she shared, with pictures in another tweet.

Indian film-maker Ram Gopal Varma also shared an image of protestors climbing the walls of the Senate saying, “Protesters taking over Capitol Hill. This is what Donald Trump has brought America to. The founding fathers must be turning in their graves.”

Protesters taking over Capitol Hill...This is what ⁦@realDonaldTrump⁩ has brought America to ..The founding fathers must be turning in their graves pic.twitter.com/tYDnK4x83r

Trump supporters were rioting in opposition to the ongoing certification of Joe Biden’s presidential election win in November, reported The Hindustan Times. They stormed the Capitol building in Washington, forcing lawmakers to flee for safety and leaving one woman dead. Twitter, Facebook and Instagram have blocked Trump from posting on the platforms