JUI-F and PDM chief Maulana Fazlur Rehman, while addressing the Bahawalpur rally, announced that the 11-party alliance would stage a sit-in in front of Election Commission of Pakistan (ECP) headquarters in Islamabad to protest against delays in the hearing of PTI’s foreign funding case.

"Election Commission is delaying the case because the largest chunk of money [for PTI] came from Israel," he claimed.

In an apparent reference to the security establishment, Fazl said it must clarify its position whether it is the one responsible for bringing the current government into power.

"This country is for people and without people's consent, we do not accept anyone's rule," he added. 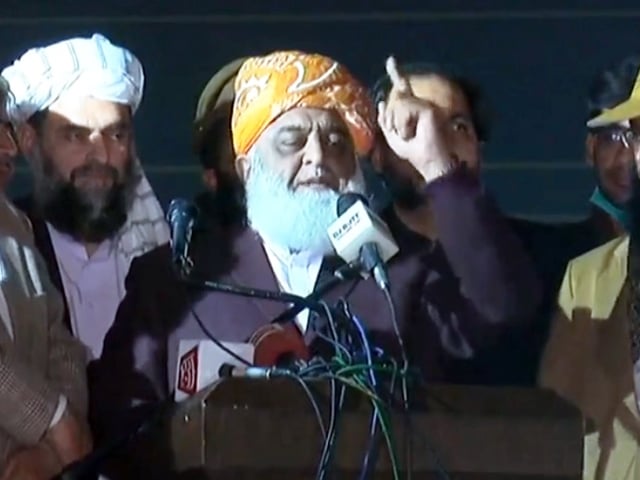 Dismissing ‘rumours’ of rifts within the PDM ranks, he said: “When multiple parties sit together, everyone has its own point of view but that does not mean disagreement over core issues”.

"They (the government) say we have disagreement among us but the reality is in stark contrast to what the government thinks. Unlike the government, PDM has leaders with political maturity," he added.

Fazl said that they will show their cards at the right time and the government of PM Imran will be left ‘wondering’.

The PDM head said the alliance will continue to use it legal and constitutional right until the present government is removed from power.

"PDM is struggling to bring true democracy to Pakistan and we all are united on the issue," he added.

Maulana Fazl said the government was expecting the PDM to break but when we announced the decisions, [of the party meeting] it was like "someone died in the government's camp".

"You cannot govern by stealing people's vote. True representatives of the people are part of PDM."

Coming down hard on the PTI government over its economic policies, the JUI-F amir said that the economy of the country has been destroyed. "Today, security of a state depends on its economy. During Nawaz's tenure, at one point our growth rate was 5.5% and it was forecasted to be over 6% the next year," he added.

He said that Imran Khan had prayed that Modi succeeded in the Indian elections but India later changed the autonomous status of Kashmir.

"Today, Afghanistan does not want to talk to you. Iran, despite being your neighbour, is in India's camp. India, Bangladesh, Malaysia, Indonesia, Sri Lanka, Bhutan, Nepal, Iran and all regional countries were progressing expect Pakistan which has fallen behind.”

He said that the West was supporting the current government because it wanted to destroy China-Pakistan Economic Corridor (CPEC). "Today, CPEC's condition was similar to the condition of BRT in Peshawar."

The PDM leader said that the government had announced to bring ‘change’ in the country but they have only brought change in the cabinet on multiple occasions. "Was that the change they were bragging about," taunted the Maulana to a large cheer from the crowd.

He said that if the government did not know how to run the affairs of the country then it should not have come to power at all. "You should have at least prepared before [coming into power]. These people do not deserve to rule."

Maulana Fazl further said that people were forced to commit suicide and slaughter their children owing to rising inflation in the country but the shameless government ministers are not paying any attention to them.

Maryam Nawaz, while addressing the huge crowd, said that the day the lawmakers of Pakistan Democratic Movement resigned, would turn out to be the final day of the government of Prime Minister Imran.

“You know whose legs shake when Punjab rises? Establishment, selectors and selected all are watching that Punjab has risen," she said.

"What will happen if I turn these people [participants of the rally] to Islamabad... what would happen? The puppet PM will have no place to hide," Maryam said while seeking permission from Maulana Fazlur Rehman to do so.

The PML-N leader said that during the tenure of her father former premier Nawaz Sharif, price of wheat was Rs35 which is now available at Rs90, adding that the price of sugar has also gone up to Rs120 from Rs50.

"IMF has said electricity tariffs must be increased by 25%," she said and added that the government must be sent packing as soon as possible to protect the livelihood of poor people.

Slamming PM Imran's recent statements, she said that after 2.5 years he says that he does not know how to govern and keeps on saying that the army thinks he is not corrupt.

"He (Imran Khan) says that I'm not corrupt but the fact is you have a 300 Kanal house in Islamabad... where did you get the money to purchase it?" 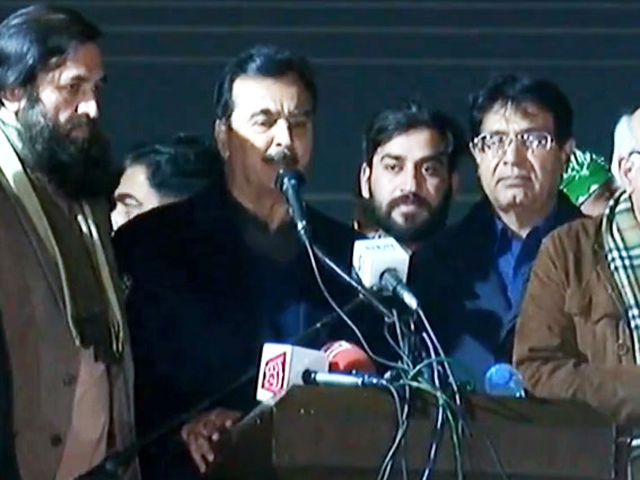 "I know your condition, your poverty and I also understand the solution to your problems is not just cosmetic measures but the creation of a separate province," he added.

Gillani also said that all the ministers must be saying that the rally has failed but they must see this “sea of people” in Bahawalpur, gathered here on the call of removing the government. 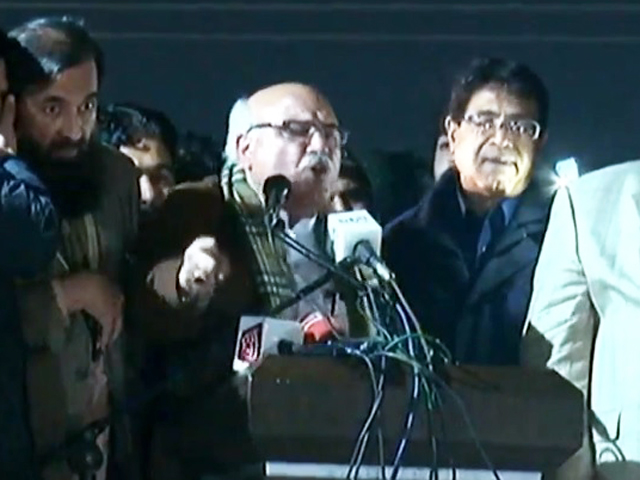 Awami National Party (ANP) leader Mian Iftikhar, while addressing the rally, said days of Prime Minister Imran Khan's government are numbered and his rule is about to end.

"If we cannot do any harm to you then why you censor us on media. Your days are numbered," he said.

The ANP stalwart also said that the "oppressors" will be defeated and the PDM movement will emerge victorious.

Earlier, Maryam from her container on her way to rally venue urged the masses to join her in the rally to remove the "puppet" PTI government.

"Come with your daughter, your sister Maryam, to Seraiki Chowk, so Bahawalpur may also announce the end of this fake government," she said.

Rally has started. If this is the beginning, I don’t know what the build-up would look like. We haven’t yet entered city. Masha’Allah 🙏🏼 pic.twitter.com/3X1PK0YEuP

Earlier, upon arriving in the city, the PML-N leader was delighted by the response she got from the masses.

"Rally has started. If this is the beginning, I don’t know what the build-up would look like. We haven’t yet entered city. Masha’Allah," she wrote on her official Twitter handle.

'Islamabad is not someone’s property'

Speaking to the media in Multan, Maulana Fazl said that the opposition leaders were struggling to get rid of the illegitimate government in Islamabad.

The PDM head said that all opposition leaders were standing united on their stance against the government and “there has been no change in it”.

“Claims of change in policy are exaggerated and hold no degree of truth,” he maintained, adding that most of the opposition lawmakers have submitted their resignations to their respective party heads and the process would soon complete.

“Islamabad is not someone’s property, we are undertaking a legitimate struggle to get rid of an illegal occupation,” he stressed.

PML-N spokesperson Marriyum Aurangzeb said that the rally will reach Lari Ada Chowk via Dera Iqbal Chandar, and will end at Chowk Seraiki where all three — Fazlur Rehman, Maryam Nawaz, and Yousuf Raza Gilani — are expected to address the rally.

On the other hand, a spokesperson for the district police said the administration had not yet given permission for the rally.

Warning notices have been issued to the organisers to cancel the rally while banners and billboards advertising the rally in the city have also been removed, he said.

The police spokesperson added that cases have been registered against local PDM officials and workers for violating coronavirus safety protocols.