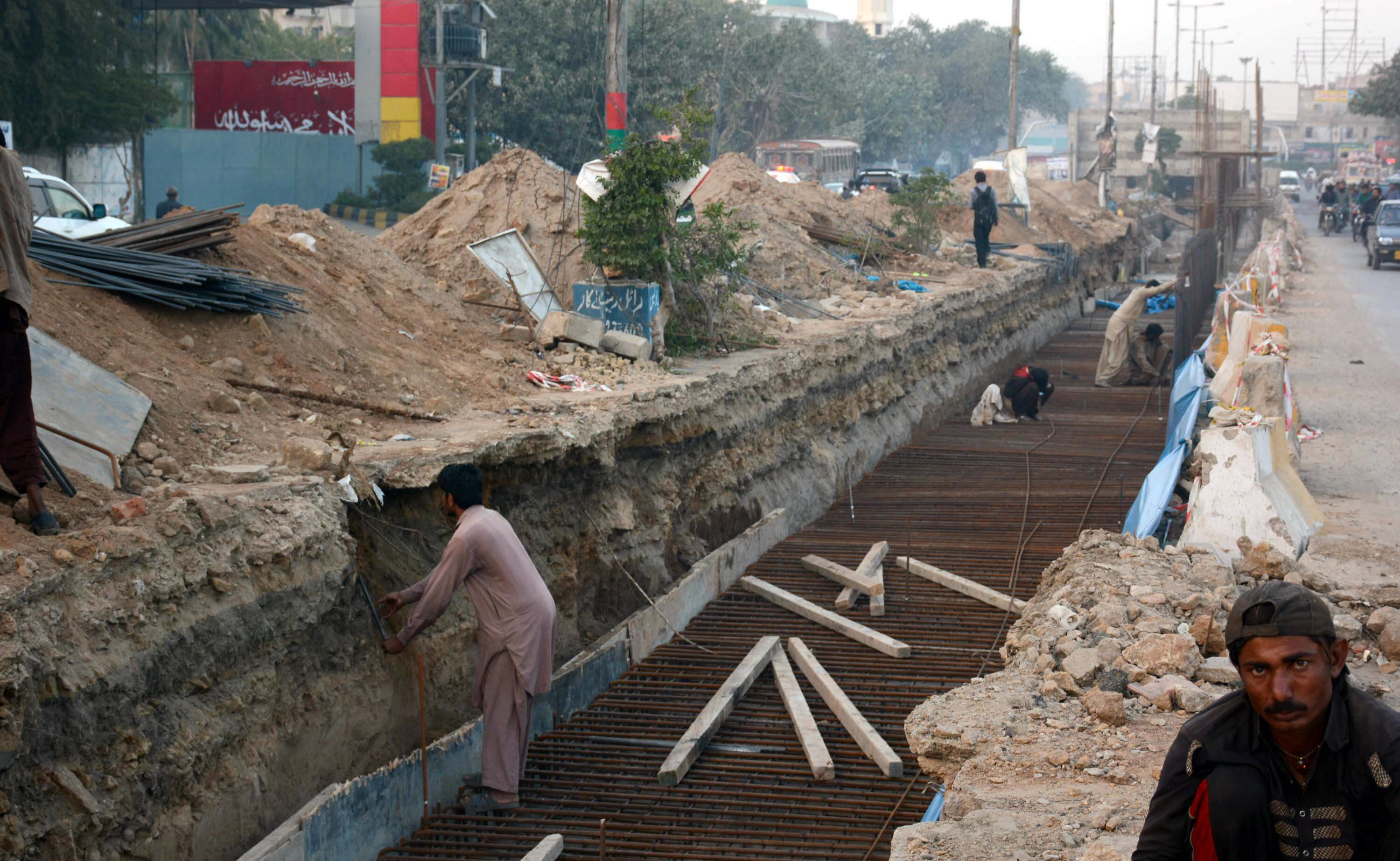 In 2020, Karachi seems to be going nowhere, with transport development hitting snag after snag in the city.

The partial restoration of the long-awaited - 21 years to be exact - Karachi Circular Railway (KCR) remained to be the only remarkable feat in the metropolis’ transit sector, and the completion of mass transit schemes was deferred to the next year, as had been happening in the past.
So, even when the relevant authorities are hopeful of setting in motion many  transport facilities, including those pertaining to rapid mass transit, citizens remain wary of entrusting hope in these promises.

And a trip down 2020, with particular focus on transport development, or rather lack of it, explains why.

The construction for the Green Line Bus Rapid Transit project was initiated under the supervision of the Sindh Infrastructure Development Company Limited (SIDCL), an institution operating under the federal government, in 2016. Its track extending from Surjani Town to the Municipal Park near Jama Cloth Market, was scheduled for completion in 2017.

Almost four years on, its completion is still awaited.

The delay has been attributed to the Centre’s slow pace of work on the project, frequent changes in the project’s design and seemingly never-ending differences between the Centre and provincial government.
As of now, civil works on the 17-kilometre-long track of the project, connecting Surjani Town and Gurumandir, is complete, as part of the first phase of the project. Remaining construction constituting the first phase keeps getting delayed for the past four years.

The construction of a track between Taj Medical Complex and Municipal Park, which constitutes the second phase of the project, was initiated in November 2020.

According to SIDCL officials, the second phase of the project, as well as the construction of a Numaish Chowrangi underpass included in the scheme, is expected to reach completion within the next 12 months and by March 20201, respectively.
They said it was likely that the buses would start running on the track by June 2021.
The federal government has awarded tenders for procuring 80 buses for the purpose.

Commenced in 2016, the construction of the Orange Line bus rapid transit project, under the supervision of the Sindh Mass Transit Authority, remains in limbo even after a passage of four and a half years.

While the construction remained halted for five months due to the coronavirus pandemic, Sindh transport secretary Shariq Ahmed is hopeful of completing the remaining the construction of bus stations by the end of February 2021.  Besides, he said civil works in the project had been completed.
With respect to the procurement and operation of buses for the Orange Line project, he said the tasks had been assigned to the SIDCL, for which the

Sindh government had agreed to pay Rs2 billion to the federal government.

As per the agreement between the Sindh government and the Centre, the latter would import buses for the project by 2021.

Red Line
The Red Line bus rapid transit project was given the green light by the federal government in 2020, after a delay of several years. Moreover, international donor agencies approved loans for the scheme.

A project being handled by the Sindh government, the track for Red Line connects Model Colony to Merewether Tower. Its cost is estimated around $493.5 million and the provincial government would have to return loans taken for its execution within 30 years.

According to the provincial transport secretary, work on the Red Line project will start in March 2021 and is expected to complete within 24 months.

The Yellow Line bus rapid transit project is yet to see the light of day.

It includes a 21-km-long track connecting Dawood Chowrangi to Nomaish Chowrangi and the World Bank has issued loans on easy terms for its execution. The loan will be repaid by the Sindh government.
The total cost of the project is estimated to be $438.9 million, of which the World Bank will have a share of $381.9 million, the Sindh government will pay $19.5 million, while private entities will contribute a sum of about $37.5 million to the project.

According to an official of the Sindh transport department, the detailed design of the project is expected to be completed by December 2021. The project is likely to reach completion in 2025.

According to provincial transport secretary Ahmed, the services of a consultant are being sought for the preparation of the project’s design and its construction will start by the end of 2021.

Unlike other transport schemes, the KCR saw some progress, with the railway authorities partially restoring the intra-city train service in November 2020, as per Supreme Court orders.
The restored part of the track sees trains running between City and Pipri Stations.

However, reports soon emerged of the train service running losses, while a survey conducted by The Express Tribune showed that the train had few passengers travelling in it, with their numbers decreasing even further on weekends.
Pakistan Railway officials, on the other hand, maintain that work, inlcusing the removal of encroachments, for the restoration of the complete train service is underway in full swing.

According to transport secretary Ahmed, underpasses and flyovers are to be built on 11 level crossings along the KCR track, the construction for which will start within the next two months.

Besides, 64 out of order CNG buses, of 75 procured by the city government, couldn’t be repaired in 2020 too, and remain idle at Surjani Town bus depot.

Last week, a Sindh cabinet meeting decided to invite bids from private entities to entre a five-year contract for repairing and running these buses.

Besides, 10 buses were donated to various government agencies in the city during 2020. Yet, Sindh continues to face a shortage of public buses.

According to the Sindh transport secretary, the provincial government, in view of the lack of buses, has lifted the ban imposed on issuing route permits for 260-seater minibuses.

Additionally, the Sindh government plans to procure 250 new buses under a public-private partnership, he said, adding that of these buses, 240 would operate in Karachi and 10 in Larkana.

The buses are expected to arrive by June.