Oil prices up as dollar and US oil inventories fall

WHO, marking year since Covid-19 began, urges fair vaccine distribution to all

A mob, reportedly led by clerics, on Wednesday vandalised a Hindu temple in the southern Karak district of Khyber-Pakhtunkhwa, community leaders and police have confirmed. The temple, though no longer functional, is considered a revered pilgrimage site by the Hindu community.

Residents in the Terri area of Karak were not happy with the ongoing renovation and extension of the temple which is why they vandalised it before setting fire to it, according to the community leaders. The mob was too big for the local administration and police to confront.

The historic temple had stopped offering religious service after the 1947 Partition when all local Hindu families migrated to India. However, four years ago, the unfrequented temple was handed over to the Hindu community on the Supreme Court’s order. And it has been a pilgrimage site for Hindus ever since.

According to reports, local clerics were not happy with the handover of the temple to the Hindu community. The ongoing renovation further fuelled their anger which set off a chain of events that led to Wednesday’s vandalism, residents told The Express Tribune. 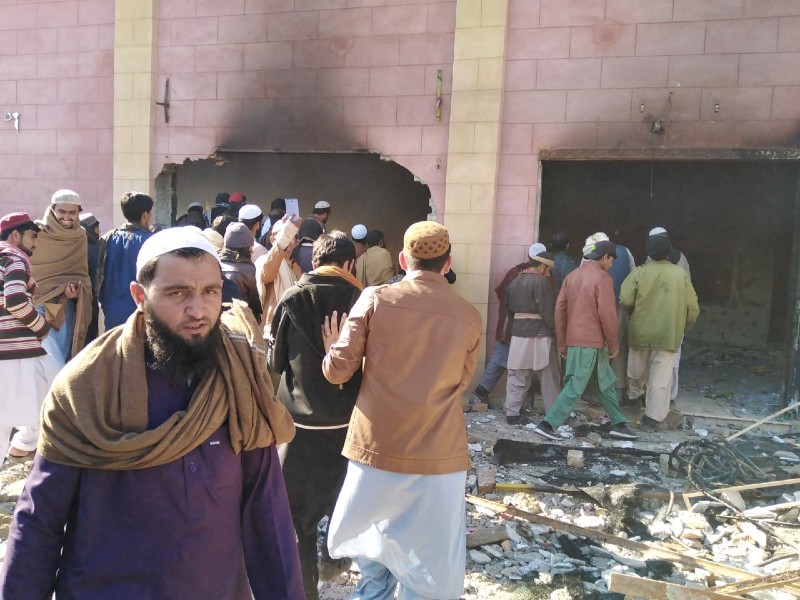 The district police officer (DPO), Irfanullah, had to call in police reinforcement to disperse the mob and wrest back control of the premises. “The situation is out of control as the charged mob is ready to confront anyone,” claimed a local who spoke on the condition of anonymity.

DPO Irafanullah told The Express Tribune that the Hindu community had bought some land to extend the temple where they were constructing a building.

However, a local cleric instigated people to attack the structure, he added. “They attacked and demolished the under-construction building. We’ve registered an FIR against the cleric,” he said adding that they were in control of the situation.

“There was a weekly bazaar in the Terri area where a large number of people had turned up from the adjoining areas. Some miscreants incited them to stop the renovation work at the temple,” said Wazir Zada, the provincial adviser on minority affairs, while talking to The Express Tribune.

He regretted vandalism at the temple while saying that he was travelling to Karak along with other government officials to assess the damage.

“This is a revered site for the Hindu community. They come here in large numbers from across the country every week,” he said, adding that the government has ordered the provincial police chief to take strict action against those involved in vandalism.

“The police are already conducting raids in the area to arrest the culprits after identifying them with the help of video footage of the incident, which is making the round on social media,” he added. “The IGP is there, while the DPO himself is leading the raids.”

Community leader Haroon Sarbdyal criticised the government for its failure to protect the temple.

He recalled that some time back a local resident had moved the court seeking handover of the temple claiming that the land was the property of his ancestors who had converted to Islam from Hinduism. “The Hindu community also moved the Supreme Court which subsequently adjudicated the case in their favour,” he added. “Some local residents were not happy with the court judgment.”

Sarbdyal demanded on behalf of the community that the government take action against the culprits and rebuild the temple.

The temple comprising several rooms was frequented by a Hindu seer Baba Santhuk Nak Jee, and other yogis and pontiffs which is why it is revered by the community as a site of pilgrimage.

Meanwhile, Chief Minister Mahmood Khan took notice of the incident and directed the administration and police to take strict action against those involved and send compliance report to him as soon as possible.

Meanwhile, Federal Minister for Human Rights strongly condemned the wanton act and vowed to bring the culprits to justice. “Strongly condemn the burning of a Hindu temple by a mob in Karak, Khyber-Pakhtunkhwa,” she wrote on her twitter handle.

“[The] K-P government must ensure culprits brought to justice. MOHR also moving on this. We as a govt have a responsibility to ensure safety & security of all our citizens & their places of worship,” she added.