Actor Fahad Mustafa stated in a recent interview that "95% cases of sexual harassment are genuine but in some cases, people are falsely accused, so we have to tell every kind of story.”

The actor was shedding light on the plot of his latest show Dunk, which revolves around false accusations of sexual harassment. The television series also stars Bilal Abbas Khan, Sana Javed and Naumaan Ejaz.

“We have always tried to show different kinds of stories,” said Fahad. “We also made a drama Meri Guriya which told the story of [the rape victim] Zainab.”

“As producer it is my responsibility to tell every kind of story and I believe people will enjoy watching this drama,” he added.

Fahad went on to say that his new drama depicts reality very closely and that Dunk “is a tribute to every victim who has been falsely accused of sexual harassment."

When asked about his stance on Meesha Shafi’s harassment case against Ali Zafar, he said: “I do not know much details about the case, but all I know is that Ali has suffered a lot at the professional front, it is a huge loss for Ali and his family.” Mustafa added that,“I think, brands should set an example by working with the people who have been falsely accused of sexual harassment.”

Now, Twitter is livid over Fahad's statements and the makers of the television serial for propagating a narrative which may prevent victims of sexual harassment from speaking their truth out of the fear of being labeled as liars.

Many are also calling the supporters of the recently aired serial “rape apologists.” Others are asking Fahad whether being an accused harasser is an achievement so big that one needs to pay tribute to it.

Some, however, are just disheartened and asking why the entertainment industry – in its entirety – is adamant on producing narratives against women.

“A woman can never provide proof of being teased, groped and touched or anything that happened behind a close door. Kaha say gawah laye k ik mard nay chaltay huay haath maara?” asked a user.

A woman can never give a proof of eve teasing, groping, being touched or anything that happened behind a close door. Kaha say gawah laye k ik mard nay chaltay huay haath maara.#Dunkdrama #FahadMustafa

"'Dunk is a tribute to the misogynistic mindset of the Pakistani entertainment industry; it will paint men as victims while grossly misrepresenting reality,' said the cast and crew of the series while talking about their upcoming venture with pride. There, fixed it," boldly edited another.

"Dunk is a tribute to the misogynistic mindset of the Pakistani entertainment industry; it will paint men as victims while grossly misrepresenting reality," said the cast and crew of the series while talking about their upcoming venture with pride. There, fixed it. https://t.co/EeXjONdJIJ

But many simply questioned the purpose.

Such “victimhood” much wow https://t.co/UItibdkYEa

yes lets give a tribute to victims of false allegations which stand at 2% of the time while conveniently gaslighting and dismissing the plight of every woman & child in Pakistan unsafe at the hands of men who's egos you're boosting 👏🏽👏🏽👏🏽 https://t.co/vstHU7Q0v2 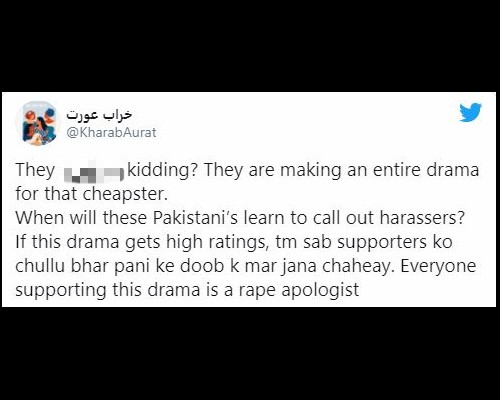 While others provided what they believed was the actual purpose.

peak clown behavior yes. but also scary to see how defensive this industry is & creating propaganda in response to *1* case of sexual harassment. this campaign of intimidation championed by predators seeks to snuff out the nascent metoo movement. they’r scared. as they should be. https://t.co/F2xEL21ITj 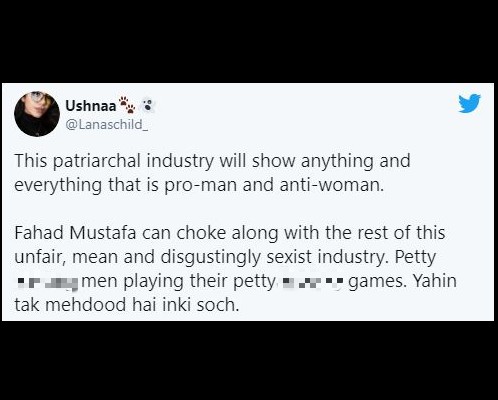 I honestly feel like men who create shit like this have already harassed women and are scared of it coming back to them https://t.co/KwJEXSUAM7

Is it an achievement being victim of false allegation of sexual harassment?

What could be the consequence?

Instead of producing the dramas for sexual harrasment/rape victiims, we are coming up with this absurd that won't only strengthen the mindset of absuers getting away with the allegations calling it 'FALSE" but also giving hard time to victims to get the justice.#Dunk https://t.co/KyOM6MKGbC

A society that brushes 90% of harassment cases under the rug as false accusations is now going to pay tribute to men. Patriarchy at its brightest ladies and gents 👏 https://t.co/U5kdpT8VLL 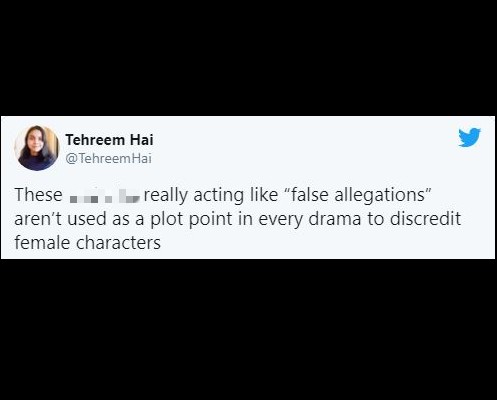 Because all women are 'Jhooti' (ehen!)

yes because all women lie and men are angels who only get falsely accused :( poor men :( https://t.co/tkCV6LL6tt

Nauman Ejaz... probably another JHOOTI and so much more hate against women! Woohoo that’s all we need to end this year. https://t.co/SVvBCpZi2a

Out of 99% cases that are true they chose to make a drama on this 🤦🏻‍♀️ pk tv industry never fails to disappoint https://t.co/6q1N85Jo1F

But 'real feminists don't waste time shouting for their rights' 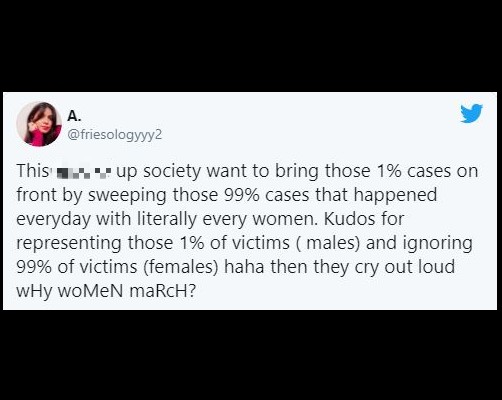 Just when you thought..

Just me and my hubby was discussing that what is the topic of this drama and i said i think it will be on allegation because in our unis 95% it happens and noone talks about it.students suffers but there is no committee to listen to them.
And than this happend.. seriously... https://t.co/KPDbx9K6n5

TrIbUtE? So many women are harassed in educational institutions on daily basis in Pakistan. Associating them as weak creatures and victims of false allegations is another level of maintaining patriarchal culture. https://t.co/YDNnxoqwiv

Things got a little personal around here

featuring nauman ijaz who we all know about 🤣 https://t.co/iJ6GBWDX1z

and OF COURSE it has noman ijaz 🤢 https://t.co/cpfkQomzP5