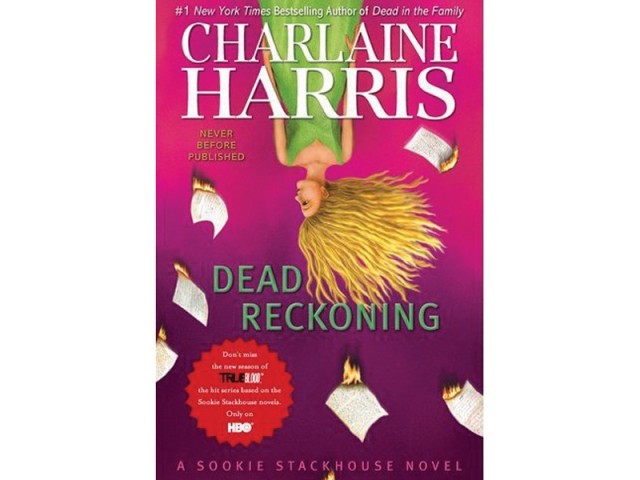 If there’s a best-seller series I openly admit to reading it’s Charlaine Harris’ Sookie Stackhouse novels, or the Southern Vampire novels as they were known before Alan Ball adapted them for HBO’s “True Blood” series. So what if they’re not very well written? So what if they’re cheesy? They’re just so much fun. Here is this intrepid young barmaid (Barmaid! As if she lived in Valhalla) who can read minds and is a magnet for trouble, especially of the supernatural kind. She’s outspoken, feisty and not very complicated. Vampires are out of the coffin, other ‘supes’ now abound and there’s always sex and violence around the corner. Best of all, Sookie lives in a tiny town in Louisiana that’s full of semi-literate, inbred swamp-trash whose shenanigans are always entertaining.  How much better can it get?

Not much, it seems. Harris started off the series well but sadly, she has been unable to maintain the momentum in her last few books. With the latest installment, Dead Reckoning, she has shown that she is not capable of writing a long-lasting bestseller series the way Janet Evanovich has written her Stephanie Plum novels. Dead Reckoning sees Sookie trying to come to terms with her fairy relatives and her strained ‘marriage’ to Eric Northman, the Area 5 vampire sheriff. Of course, she’s also got Tara’s baby shower to plan and tables to wait at Merlotte’s. If this sounds incredibly lame, it’s because it is.

Even to someone who has enjoyed these books previously, Dead Reckoning feels stale. It’s repetitive with no zing and without the usual sex, gore and violence that kept the action ticking along in the earlier novels. The books have always had a great many things stewing together, but now instead of one steady narrative arc there is a mess of smaller sub-plots, which have no bearing on the story. These include, but are not restricted to: Sandra Pelt out of jail and wanting to ‘get’ Sookie, Eric being forced into a pact his maker chose for him years ago, Tara’s baby shower coming up, Pam’s lover being unwell and dying and yes, entire scenes dedicated to Sookie’s haircut. What is the point of all these smaller plots? Do they add to the larger one? They can’t, because it really doesn’t look like there is a larger plot at play at all.

There should have been some resolution on a few of the series’ sub-plots in Dead Reckoning and while there is one that is finally laid to rest, Harris spends too long trying to make Sookie into a more complex character than the one fans know. Sookie has now become prone to sudden internal monologues in which she waxes philosophical about concepts like sin. Is Harris attempting to create a more politically correct and sensitive protagonist? Or, in the wake of “True Blood’s” success, is she attempting to write something closer to a screenplay? Either way, Dead Reckoning is inauthentic and forced. Moreover, entire conversations are repeated in this book — it’s unthinkable why this could be intentional. If the reader can remember conversations Sookie has had, shouldn’t she be able to? She is telepathic, not amnesiac.

Dead Reckoning has no redeeming features and it is certain to reduce Harris’ fan following drastically. For those who are new to the series and interested in the “True Blood” source material it is probably best if they stop reading the books written after the TV show began because it is now clear that this really is a case of a writer being run over by the vehicle she herself created.