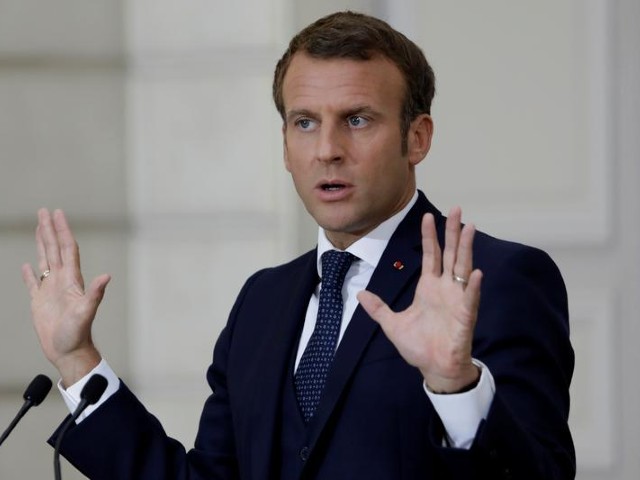 Aman Project chairperson Nabeela Ali, in a letter to Council of Europe, has urged the European body to take notice of recent “Islamophobic” statements of French President Emmanuel Macron.

"We believe his [Macron's] behaviour is not only serviceable to the other communities living in France but also has raised threats to his national security and put the public safety at risk," she wrote.

Nabeela Ali said that the people living in the UK whole-heartedly condemn the recent and previous terrorist attacks in France, in response to the caricatures of Prophet Muhammad (PBUH).

"We understand the Freedom of speech is considered an 'essential freedom' in France. It is protected by the 1789 Declaration of Human and Civic Rights, which is incorporated by reference into the French Constitution. It is also protected by the European Convention on Human Rights Act 1998, to which France is a party and the French Law on the Freedom of the Press of 29 July 1881," the letter read.

Quoting a recent letter of the French president to a British Newspaper Financial Times, in which he said that if France was primarily attacked by Islamist terrorists, it was because it embodied the freedom of expression, the right to believe or not to believe, a certain art of living as well.

Nabeela Ali also quoted Macron as saying that “the people of France have stood up to say that they will not give up on their values, their identity, and their imagination. None of these human rights that one day in 1789 were proclaimed for the world”.

Responding to these statements, she said that Macron’s egoistically provoking statements without giving a single thought about the self-respect and dignity, hurt beliefs of two billion Muslims around the world and were contrary to the freedom of expression and human rights that are given to the people under the Article 4 and Article 11 of the French Declaration of human and civil rights of August 26, 1789, the Article 10 and Article 3 of Human Rights Act of 1998 of the European Convention on Human Rights and the French law on the Freedom of the Press of July 29, 1881.

"Nevertheless, it is indecisive yet if the French President has limited knowledge about the freedom of expression and human rights laid down in the constitution or he has prejudice against a community because the 1789 Declaration of Human and Civic Rights defines freedom in general as 'being able to do anything that does not harm others.' Consistent with that definition, freedom of speech in France is limited by the right to privacy, the presumption of innocence, the right to ‘human dignity’, and by rules prohibiting defamation and insult."

She said that countries no longer have any boundaries when it comes to the social media so the French president’s statement has affected all the Muslim community living around the world.

"We respectfully request the commissioner of human rights to please take notice of this issue to reassure our dignity and put restrictions on France, on any type of drawing, publication and exhibition that may depict God/Allah, any prophet, any person, community, belief or colour for the sake of protecting privacy, dignity, fame and beliefs with no exceptions and reassure the France to execute the liberty, human rights and freedom of expression in lines with the above mentioned French constitution," she maintained.

The Aman Project chief further said that it was illegal to incite others to commit a crime as mentioned in the French Constitution but President Macron has protected the right to publish offensive and provoking cartoons contrary to what is written in the laws knowingly that publication of these cartoons was the main incitement of terrorist attacks in France.

"We demand to act immediately in the best interest of international security, public safety and the very most dignity of Muslims around the world."

While acknowledging Nabeela's email, a spokesperson for the office of Commissioner for Human Rights in the Council of Europe said that the information was brought to the attention of Commissioner Dunja Mijatović.

Turkish Ambassador to London Umit Yalcin also appreciated Nabeela's effort. "I read with great interest you initiative with regard to fight against Islamophobia, as well as, the news published on Evening Chronicles on November 24," he said in a letter.

He said that he believes that Islamophobia and non-tolerance have become one of the most urgent issues that have to be addressed in a comprehensive and determined manner.

"Unfortunately, toxic narratives only provide these phenomena a fertile ground. Therefore, I believe that your efforts are invaluable," he added.