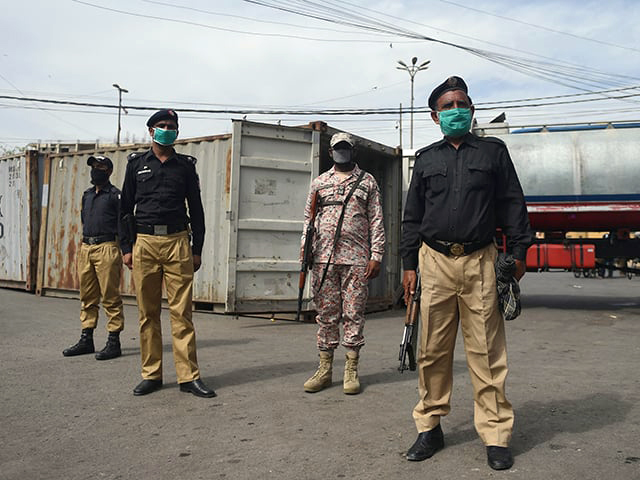 The Central district administration announced on Wednesday the imposition of micro smart lockdowns in selected areas, identified as coronavirus hotspots.

A notification issued late at night identified selected areas in 11 union councils of the district where smart lockdown restrictions would be enforced.

According to the notification, the lockdowns will be enforced from 7pm today (Thursday) and will remain effective until December 31, 2020.

The notification states that grocery shops and pharmacies shall be allowed to operate in areas under the lockdown and no home delivery or takeaway from any restaurant is to be permitted. Restrictions have also been placed on private gatherings at homes and pillion riding has been banned.

The decision comes on the heels of the National Command and Operation Centre's (NCOC) meeting this morning where it was noted that the highest number of coronavirus deaths have been recorded in Sindh. Two major cities of the province - Karachi and Hyderabad - have also been repeatedly flagged for their high positivity rates for the virus.

Meanwhile, the Hyderabad district health office has recommended the enforcement of smart lockdowns in localities other than where they are already imposed.

Lockdowns have been proposed for four union councils (UCs) of Latifabad, three UCs of City taluka and two of Qasimabad taluka, as well as for some areas in Hyderabad rural .

The population of these areas adds up to 329,204. Over the last nine months, these talukas have collectively reported 557 cases, with the highest number of cases, numbering 197, detected in City taluka's UC-3. This is followed by Qasimabad's UC-3, which reported 130 Covid-19 cases ad 62 deaths during the stated period.

On the other hand, Hyderabad DC Fuad Ghaffar Soomro is of the view that the district administration will not enforce a lockdown in any of the suggested areas.

The proposed lockdowns have not been notified thus far, he said while speaking to The Express Tribune.

Crackdown on pharmacies with quacks

The decision has been taken keeping in view the worsening situation of the pandemic in the district, where over 37,000 Covid-19 cases have emerged so far- the highest in the country yet, the DC told the media after inaugurating an express centre of the Ehad Pharmacy.

According to data on the Sindh health department's website, East district had reported 36,658 infection as of November 30, 2020, as it continues to have the highest virus tally in the province. Moreover, statistics released by the health department last week showed that the district had reported the highest number of coronavirus-related deaths in the province thus far, number over 900.

As another 302 cases emerged in the district on Wednesday- the most detected in any district across Sindh on the day- the DC announced action against inadequate illicit and wrongful practices pertaining to healthcare.

"The district is the worst hit by the pandemic in the country," he remarked, adding that "In these circumstances, it is pertinent that stringent measures are adopted to control the spread of infectious disease."

Acknowledging that pharmacies came under the jurisdiction of the health department, he further asserted, "But controlling quackery is my responsibility."

"We will take action against pharmacies working without qualified and trained pharmacists, and those that are not just selling medicines without prescriptions, but also violating Covid-19 SOPs," the DC reiterated.

Responding to a question, the DC further said that the district administration had decided to take action against businesses, banks and public places allowing entry to people not wearing masks.

"Though, the implementation of SOPs, such as enforcing the use of masks, is challenging, the guidelines issued in connection with marriage halls, restaurants and public gatherings by the National Command and Operation Centre are being strictly implemented in the district," he assured.

Moreover, the DC said awareness initiatives regarding the coronavirus were also underway and would continue for the next three months, until March.