In major shift on Twitter, Imran Khan hits unfollow on everyone

'Dissenting judges' must be part of larger bench

People aged 80 and over, care home workers, staff in the National Health Service (NHS) will be prioritised

Britain on Monday prepared to start its biggest ever immunisation campaign but health officials warned the drive to inoculate millions against Covid-19 would be a "marathon" stretching well into next year.

The world-first rollout of the Pfizer-BioNTech vaccine is due to begin on Tuesday -- dubbed "V-Day" by Health Secretary Matt Hancock, who has volunteered to take it live on television to assuage any public doubts over the rapid approval.

Croydon University Hospital in south London is one of 50 clinical hubs that started receiving the country's initial consignment of 800,000 doses over the weekend, from a Pfizer plant in Belgium.

The vaccine rollout coincides with the end-game of Brexit talks on Britain's future trading relationship with the European Union.

The government reportedly has military flights on standby to transport the jabs from Belgium, in case the negotiations collapse and new rules cause border chaos from January 1.

Croydon University Hospital in south London is one of 50 clinical hubs that started receiving the country's initial consignment of 800,000 doses over the weekend

At the Croydon hospital, a lab technician lifted a package of doses out of dry ice in a box storing the vaccine at -70 degrees Celsius (-94 degrees Fahrenheit), and transferred the batch to a specialist freezer.

"To know that they are here, and we are amongst the first in the country to actually receive the vaccine and therefore the first in the world, is just amazing, I'm so proud," said Louise Coughlan, joint chief pharmacist at the Croydon hospital trust.

First in line will be people aged 80 and over, care home workers, and frontline staff in the state-run National Health Service (NHS) who are considered at higher risk.

But it is running into technical challenges in administering the doses away from hospital hubs, given the need for ultra-low storage temperatures and how the vaccine is packaged.

The Pfizer-BioNTech jab will be administered in two doses, three weeks apart. So Britain's initial batch will cover 400,000 people, and the government has 40 million doses on order in total. 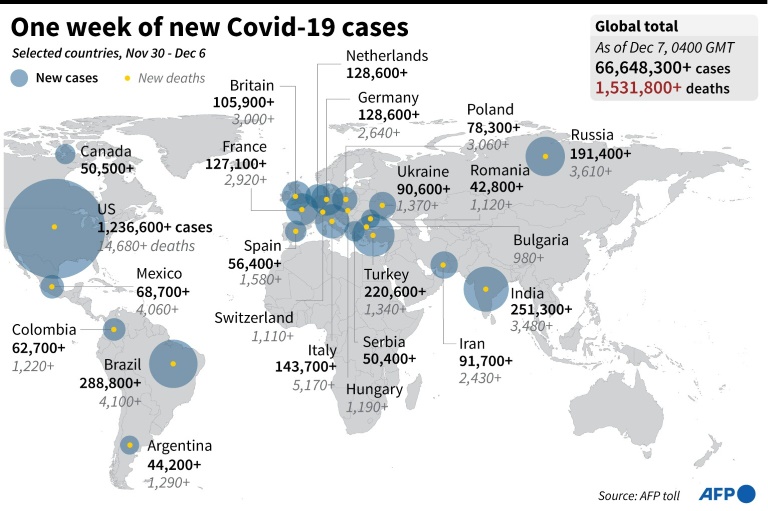 It hopes for many more from other drug companies, including a candidate from Oxford University and AstraZeneca still being evaluated.

Approval for the Pfizer-BioNTech vaccine is expected later this month in the United States and EU.

Ensuring people come back for their second dose is being seen as a key challenge, and vaccine cards will be handed out with reminders.

But the government maintained it has no plans to introduce "immunity passports", even if businesses start demanding proof for people to access services.

NHS national medical director Stephen Powis said Britain's rollout would be a "marathon not a sprint", with the government sequencing priority groups by age and health condition.

It does not expect to reach younger groups until spring or summer 2021.

"Despite the huge complexities, hospitals will kickstart the first phase of the largest-scale vaccination campaign in our country's history from Tuesday," Powis said.

Queen Elizabeth II, 94, and her 99-year-old husband Prince Philip are in line to get the jab early in the rollout because of their age, reports said over the weekend.

Britain's most senior royals will convey to the public that they have been given the inoculations "as a powerful counter to the anti-vaccination movement", the Sunday Times said.

Both Hancock and Prime Minister Boris Johnson say they are willing to take the vaccine in public, although the government says ministers will not jump the age-based queue.

Britain's drugs regulator used a fast-track process to approve the Pfizer-BioNTech vaccine, but insists that "no corners had been cut".

A YouGov poll of more than 5,300 Britons published last Wednesday indicated 27 percent of people were "very confident" about the safety of the vaccine.