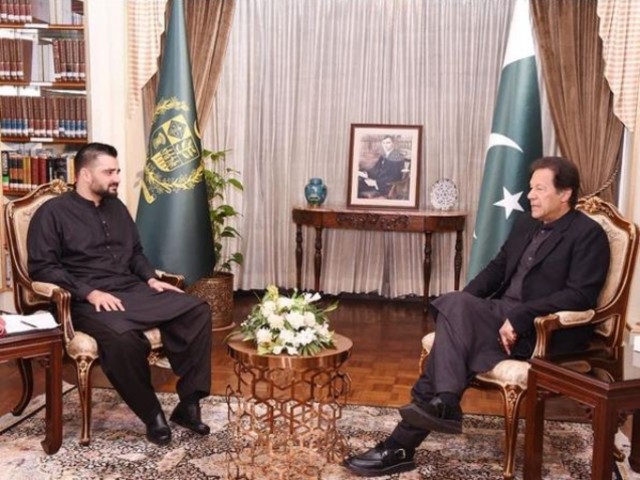 Popular actor Hamza Ali Abbasi may be on a break from showbiz, but he is writing a book about God and interviewing the Prime Minister Imran Khan.

“Watch PM Imran Khan in conversation with Hamza Ali Abbasi,” tweeted the PM Office on Saturday, revealing no further details. But as the interview, from a local TV channel, surfaced on social media last night, heads turned and we surely were surprised to see how similar the interests of both the personalities were.

Diving straight into a discussion about the former cricketer’s journey to God, the two went on to highlight how the media and pop culture influence peoples’ perspectives about religion, family values, and ethics altogether.

But since Abbasi was the one hosting, Khan did most of the talking – still, much about both the personalities came to the fore.

“We weren’t even allowed to speak Urdu while I was studying at Aitchison College,” started off Khan, after Abbasi asked him to narrate his journey to God following his own transformation. “This is because slavery leads people to be influenced by those that enslave them,” added the premier, leaving viewers wondering how all this could have anything to do with his religious beliefs.

“So during my early days as a student in one of Pakistan’s very few English medium schools, everyone wanted to be like the British. The post-colonial influence had led the products of English medium institutions to become prototypes of the British,” he added.

Abbasi then recalled how even in 2010, upon visiting the CSS academy, he came to know that students there had to wear suits five days a week. “This is a Pakistani academy,” he complained.

“And when we were growing up, you couldn’t enter the Punjab club or Gym Khanna wearing Pakistani clothes,” recalled Khan. He even pointed out how up until 1974, Pakistani clothes were not allowed inside Sindh club. “So when I went to England I realised, no matter what I or anyone from here did, we could only become a replica of the British.”

“So I started observing the advantages our society had compared to theirs. And I realised our advantage was our belief in God and the hereafter. This kept our morals and family values intact,” added Khan, who has emphasised on the advantage of keeping a family system intact on numerous occasions.

“On the contrary, when I was in England, the education there led me, among many others, to believe that religion was outdated. I don’t know about right now, but during my time, God and hereafter were outdated concepts,” he went on to reveal, hinting at his own zeal for Marxism. “But I realised our advantage after I saw the consequence of the absence of the fear of accountability over there.”

Consequence of a counterculture

Khan went on to address the American Counterculture of the 1960s: Sex, Drugs, and Rock ‘n Roll. “This movement had become a part of their pop culture. Their artists, their celebrities, started propagating it. Our religion for a reason tells us to hide each other’s flaws, but when flaws are advertised, they’re justified, and then they become a part of society,” continued the Pakistan Tehreek-e-Insaf chairman.

So irrespective of its many flaws, Khan lauded how our society, at the time, did not “advertise fahashi (vulgarity) and immorality.”

Speaking off, Abbasi then claimed that the family system of Pakistan, which Khan was taking so much pride in, was now collapsing as well. “Every other day we hear about another marriage ending. What would you suggest is the reason for that?” he inquired.

On that note, taking off from where left off, Khan reminisced how the trend of Sex, Drugs and Rock n’ Roll had seeped its way into Hollywood in the 70s, following which it was adapted by Bollywood. He then sighed, citing our content now. “Unfortunately it has made its way into our products too, and as a consequence, in our society,” noted the former cricket captain.

“I saw how badly the culture of sex, drugs and rock&roll had affected the lives of pop stars there. I saw so many celebs going to rehabs, their marriages falling apart, their children would suicide or they would suicide. I watched their lives fall apart,” he continued

Upon acknowledging his reasons, Abbasi then asked what the media’s role should be if that was becoming the case, adding that “banning was never the solution.”

To this, Khan, unsurprisingly cited Diriliş: Ertuğrul once again. He went onto claim that the reason he made Ertuğrul accessible on PTV, was to show the media houses and their sponsors that even a religiously inclined show like that could bring in the numbers.

“The media has the power to dumb down or educate the masses; but there is always a choice. There are always two paths. I acknowledge one cannot ban,” Khan agreed, addressing what Abbasi insisted earlier. “No one even has that kind of control,” he continued. “But I just wanted to provide an alternative, so makers can realise shows like Ertuğrul can also be created and watched by millions,” noted Khan.

He then told Abbasi that history never remembers the rich or the successful if all they did was serve themselves. “History always remembers people who worked for the betterment of the society. Similarly, there are few individuals in the media who ensure their messages are for the betterment. Look at Ashfaq Ahmed sahab,” he pointed out, citing the late literary figure.

“He was such an intellectual and I will always respect him. And he is remembered because everything he did was to right the wrongs in the society,” concluded Khan with Abbasi nodding in agreement.