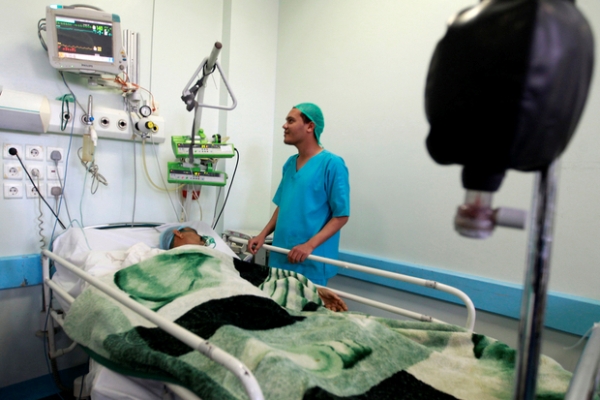 The deaths occurred as the hospital ran out of oxygen supply. PHOTO: AFP/File
PESHAWAR:

Six Covid-19 patients being treated at Khyber Teaching Hospital (KTH) in Peshawar passed away on Saturday night after "criminal negligence" resulted in a delayed supply of oxygen to the medical facility.

The hospital's spokesperson, Farhad Khan, confirmed on Sunday that six coronavirus patients, five admitted to the KTH’s Covid-19 ward and one being treated at its intensive care unit (ICU), died because the medical facility ran out of oxygen supplies.

He said the hospital usually received oxygen cylinders from Rawalpindi, but the last batch did not arrive in Peshawar on time.

More than 200 patients – including nearly 100 with coronavirus – were left for hours with limited supplies of oxygen at the government-run hospital.

“During winters, patients require a higher quantity of oxygen supply,” he said, adding that the hospital had formed an investigation committee to probe into the delay.

The spokesperson said the disruption in oxygen supplies had affected 200 people, including 96 Covid-19 patients.

He blamed a private supplier, saying the Rawalpindi-based company had "failed to meet the growing demand".

According to hospital sources, the KTH has the capacity to store 10,000 liters of oxygen, which is supplied by a company called BOC in Rawalpindi.

They added that because of Covid-19 outbreak, oxygen cylinders are being supplied to hospitals across the province, and it was because of the high demand that the supplies were delayed.

Following the incident, Khyber-Pakhtunkhwa Chief Minister Mahmood Khan directed the provincial chief secretary and health minister to order a probe into the incident, to be conducted by the hospital's board of governors, and have the inquiry completed in 48 hours.

"If the investigation is not completed within the stipulated time, the provincial government will hold an independent inquiry itself," he warned.

“The sad incident happened due to lack of central oxygen supply in the hospital," he said, confirming the deaths. "We will hold an inquiry and get to the bottom of the incident.”

Separately, the minister tweeted that he directed the hospital board to probe into the incident and take action within two days.

“I have directed the board to conduct an immediate inquiry and take action within 48 hours. If found unsatisfactory, or if otherwise required, the government will immediately order its own independent inquiry,” he wrote.

"All the facts of the case will be made public. A request meanwhile to not circulate unverified information on social media. Neither this, nor any other incident will be left unused, to improve the health system; its service; and its system of accountability and transparency."

Special Assistant on Information to the K-P chief minister Kamran Bangash said the incident was unfortunate, but action will be taken in 48 hours, and those responsible will be brought to justice.

According to data issued on Sunday by the National Command and Operation Centre, the nerve centre of the country’s Covid-19 containment efforts, the countrywide coronavirus positivity ratio has reached 7.94%.

The total active Covid-19 cases in the country have reached 53,126 as 3,308 more people tested positive for the virus during the last 24 hours. A total of 58 Covid-19 patients being treated at hospitals died on Saturday. There are 2,436 coronavirus patients in a critical condition across the country.