Trump vs Biden: implications for Pakistan

Highest turnout expected in the make-or-break US presidential election 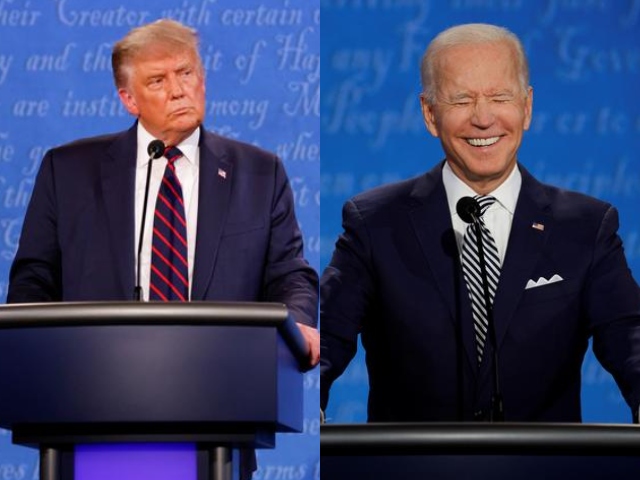 Experts believe the race between Biden and Trump is still a toss-up in key states through the Electoral College, that decide the election. REUTERS/FILE
KARACHI:

As the clock winds down on one of the most consequential elections in US history, all eyes are now set on the make or break outcome for America and the rest of the world.

For the incumbent, Donald Trump, the election will be either repeat or clear rejection. For his opponent, Joseph Robinette Biden Jr, more commonly known as Joe Biden, the election offers a unique opportunity to reconfigure his country at home and its policies abroad.

For Pakistan, foreign policy experts believe the outcome will vary depending on who occupies the White House on January 20, 2021. If President Trump defies the odds and wins a second term, the relationship will end up being more unpredictable than it is now.

However, if former vice president Biden, who comes with vast foreign policy experience, wins the election, a return to "normalcy" is expected, with caveats.

“The Trump-era contempt for diplomacy will end if Biden is elected. But we shouldn’t raise the bar of expectation,” said Talat Masood, a retired lieutenant general and a senior analyst of political and military affairs.

“The Trump-era contempt for diplomacy will end if Biden is elected. But we shouldn’t raise the bar of expectation”

While polls show Joe Biden holds a lead over President Trump across four of the most important swing states, analysts are careful in making any predictions this time.

“Placing too much stock in the polls can be wrong. The polls showed Hillary Clinton had a significant lead in the 2016 election and she did not win,” said Michael Kugelman, Deputy Director for the South Asia Program at the Woodrow Wilson Center in Washington.

“In the United States you can win the popular vote and still not be elected president because of the Electoral College,” he explained. In Pakistan, Lt Gen Masood sees a Biden presidency as more accommodating towards international alliances that Trump shunned during his time in the Oval Office.

“Joe Biden will restore the dignity of all international organizations and that will help Pakistan because there will be a certain level of understanding about how America will operate,” explained Masood. The former vice president, Masood said, will reduce the unpredictability factor.

According to the analyst, a second term will boost Trump’s confidence and he might even be more biased against Muslim-majority nations, including Pakistan. As both candidates make last minute stops in battleground states, the US Elections Project at the University of Florida reported the highest turnout of modern times.

The tally shows more than 95 million Americans had cast their votes by Monday. While both candidates don’t see eye to eye on domestic issues, they seem to hold similar views on South Asia.

“Since Trump and Biden both have, generally speaking, similar views on Pakistan and the region, I don't think we should overstate the election's impact in South Asia,” said Wilson Center’s Kugelman.

Trump, he explained, is a unilateralist who believes in pursuing US interests at all costs, without regard for the global consequences. Whereas the former vice president, places a greater premium on diplomacy and global cooperation.

“This suggests that Pakistan and the region stand to gain from a Biden presidency that would seek to regain leadership on the global stage, and to improve ties with important countries--including Iran and even potentially, to a modest extent, China,” Kugelman said by email from Washington DC.

Acknowledging the divergences in style between the two candidates, Kugelman said, Biden’s stance on Afghanistan is more measured.

In his policy statements, the former vice president has repeatedly said troops must be withdrawn responsibly and that a residual force presence will be needed in Afghanistan to prevent attacks against the US and its allies.

The Wilson Center expert on South Asia believes both men see Pakistan as a country that should be taken seriously and warrants a workable relationship, but with an emphasis on cooperation in Afghanistan and counterterrorism efforts in Pakistan.

“The inevitable withdrawal of US forces from Afghanistan means that the US-Pakistan relationship will soon need to identify a new basis,” said Kugelman.

“For so long, it has been viewed in Washington through the lens of Afghanistan. With the US footprint receding there in a big way, that lens will be increasingly irrelevant. In effect, the relationship is approaching an inflection point,” the expert said.

In Canberra, Dr. Claude Rakisits, a prominent foreign policy expert and an honorary professor at the Asia-Pacific College of Diplomacy, Australian National University, sees a slow decline in the US-Pakistan relations during Trump’s second term as president.

“I suspect that US-Pakistan relations under a Trump administration would slowly drift and their importance diminish, especially once the Americans leave Afghanistan. And now that 'peace' has been brought to that country, Pakistan would no longer be of too much use in Washington,” the expert said by email.

“US-Pakistan relations could go bad if Trump insists on India playing a greater role in Afghanistan, a development Islamabad would oppose vehemently, as it should,” added Dr. Rakisits, who has also served at the Australia Mission to the United Nations in New York.

Former vice president Joe Biden, who has been deeply involved in South Asian affairs from the time when he was Chairman of the Senate Foreign Relations Committee, and played an instrumental role in having the $7.5 billion Kerry-Lugar-Berman bill passed by the US Senate, received extra points from the Canberra-based expert.

“A Biden White House would have a better understanding of what is important for the region,” he said. Biden, who served as Obama’s deputy for eight years, experts believe, will have a more conciliatory foreign policy towards China and even Iran.

“Biden would like to revive the Iran Nuclear deal,” said Wilson Center’s Kugelman.

Trump abandoned the pact that technically prevented Tehran from building a nuclear programme. Not only that, his decision to assassinate major general Qasem Soleimani, head of Iran's elite Quds Force, brought the two countries closer to an all-out war in January this year.

"If the former vice president Biden is elected, India will not be able to get away with the human rights violations in occupied Kashmir."

Biden’s conciliatory approach towards China and Iran, experts agreed, will help Pakistan and the region. Whereas, Trump’s trigger-happy strategy only raises the spectre of conflict in the region.

“In the grand scheme of things, the conciliatory approach towards china will also help Pakistan,” said Lt General (Retd) Talat Masood, who frequently comments on the changing dynamics in the region.

The United States, Pakistan and India have perennially been in a love-hate triangle. Experts believe, the relationship with India will not change significantly regardless of who occupies the White House. However, if the former vice president is elected, India will not be able to get away with the human rights violations in occupied Kashmir.

“The Biden administration, while cooperating with India on strategic and economic issues will not remain silent about the human rights violations in India,” said Ashok Swain, a professor of Peace and Conflict Research at Uppsala University.

President Donald Trump’s administration has remained conspicuously silent on the Narendra Modi’s policies in Kashmir. Even while the president was visiting New Delhi earlier this year, he shied away from saying anything that would offend his host.

According to Dr. Swain, if Trump is reelected, Modi will continue to push the majoritarian agenda in India. “Trump is good for Modi and his majoritarian dictatorship, but bad for India,” he said.

However, if the former vice president wins the White House, Prime Minister Modi’s government will be exposed to pressure from the new administration on human rights violations, particularly in Kashmir.

“There will be pressure from within the new administration and from the Democratic Party to take an open position against the Modi regime’s policies on minorities and in Kashmir,” said the Sweden-based professor by email.

Referring to Trump as a volatile individual, Dr. Swain said, the US president has taken several positions that are not of India’s liking and interest. “The only thing Trump has done for Modi is that he has remained silent on human rights violations.” Under Trump, Dr. Swain sees a continuation of the transactional relationship between India and Washington D.C.

“Modi will buy some weapons from the US and Trump will call him a friend a few times and will remain silent over human rights violations,” said Uppsala University’s Dr. Swain, who is known for his undiluted criticism of the Indian Prime Minister.

"If it's a Biden administration, I believe that very much increases the chances that the White House would try to bring the two countries to the discussion table"

At the Woodrow Wilson Center in Washington, Michael Kugelman believes any criticism from a Biden administration would be relatively muted, given that the core focus will be on India’s strategic value. Biden, he said, would be more critical of India's human rights and religious freedom record than Trump. “But this is not a simple black or white issue of the Democrats saying more on human rights than Republicans.”

“A Democratic administration wouldn't want to rock the boat with India by calling it out too much--and especially given that the current Indian government, with its strident nationalism, is particularly sensitive to such criticism,” the South Asia expert explained.

In Canberra, Dr. Rakisits expects the future US president to employ a more balanced approach towards the region.

“While a Biden administration would want to continue to deepen the US-India relationship, I also believe that it would be more balanced towards India and Pakistan than a second-term Trump White House,” he explained.

According to the scholar, President Trump has put a lot of emphasis on his personal relationship with the nationalist leader in India.

“Biden would rely significantly less on that approach and he would certainly not cajole and compliment a nationalist leader as Trump has for the last four years,” he said.

The Democratic nominee comes with an edge over the Trump administration on many fronts.

Biden’s choice for the vice president, Kamala Harris, who is of Indian descent by her mother, is expected to bring a better understanding of the region to the White House, which for the past four years has been clueless.

“If it's a Biden administration, I believe that very much increases the chances that the White House would try to bring the two countries to the discussion table,” Dr. Rakisits said, adding there would have to be the political will on the part of Pakistan and India for this to happen.

Referring to a statement on Kashmir by Joe Biden in 2004, while he was Chairman of the Senate Foreign Relations Committee, Dr. Rakisits said: “Kashmiris should be hoping that Biden wins because Trump has done nothing for them in the last four years,”Trump, he said, has only shown his bias towards India.

“And India is not interested in discussing Kashmir and other important bilateral issues,” explained Dr. Rakisits. “Given President Trump's track record in South Asia for the last four years, I don't see a Trump administration bringing Pakistan and India to the negotiation table,” the scholar added.