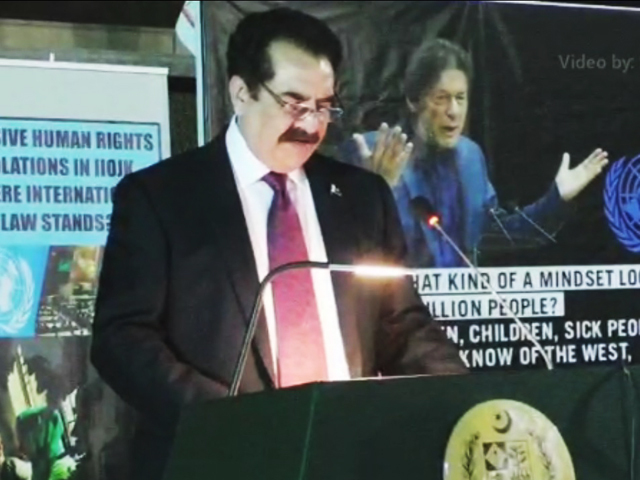 Head of Islamic Military Alliance Gen (retd) Raheel Sharif has said the Kashmir dispute has been repeatedly recognised at various international forums as the unfinished agenda of partition and maintained that Pakistanis’ political, moral and diplomatic support for the Kashmir cause will continue unabated.

“Let it be known that every citizen of Pakistan stands united with the people of Kashmir and supports their struggle for freedom with an unflinching resolve,” Sharif, who is also a former army chief of the country, said while addressing a seminar on Kashmir dispute organised by Pakistan Embassy in Riyadh on Friday.

He called upon the international community to take steps to stop atrocities in Indian Illegally Occupied Jammu and Kashmir (IIOJK) and genocide of Muslims in India.

“The issue of Kashmir is very close to every Pakistani’s heart as we fully understand the cause and dynamics of this struggle right from the beginning,” said the ex-army chief.

Sharif said since partition in 1947, horrendous human rights violations had been carried out by the occupation forces in IIOJK and thousands of people have embraced martyrdom in their struggle for freedom.

“We have closely witnessed the sufferings of our Kashmiri brethren.”

Despite repressive measures including imposing curfew and communication blockades, “Narendra Modi-led fascist regime has miserably failed to break the will and resolve of Kashmiris,” he maintained.

The former general said Pakistanis acknowledge and appreciate the resolve and valour of Kashmiris in pursuit of their goal and fundamental human rights. “They have given unparalleled sacrifices and are determined to go to any lengths till their dreams are realised.”

While criticizing the Indian aggression, Sharif said Indian atrocities have escalated to unprecedented level since August 2019 when India unilaterally revoked the autonomous status of IIOJK. “This illegal annexation and the Citizens Amendment Act, coupled with brutal human rights violations against Muslims in IIOJK and India have been emphatically condemned by the International community and in fact, by many Indians as well.”

The head of IMC said if this blatant violation of the UN Resolutions is not reversed, it will deprive the innocent Kashmiris of their basic right to self-determination, causing further unrest in the region.

It is high time for the Indian “fascist leadership” to realise that the solution of Kashmir Issue does not lie in killing and suppressing the people, instead it lies in resolving the dispute as per the aspirations of people of Kashmir and in light of the UN resolutions, said the former army chief.

He stressed that the world community needs to move forward and take immediate steps to stop atrocities being carried out in the occupied valley and genocide of Muslims across India.

“The UN must ensure that sanctity of the resolutions passed by this apex organisation are respected and should urge India to respect basic human rights of Kashmiri people and their right to self-determination.”