Hopes of a humanitarian ceasefire ending fighting over Nagorno-Karabakh sank further on Thursday as the death toll mounted and Armenia and Azerbaijan accused each other of launching new attacks. 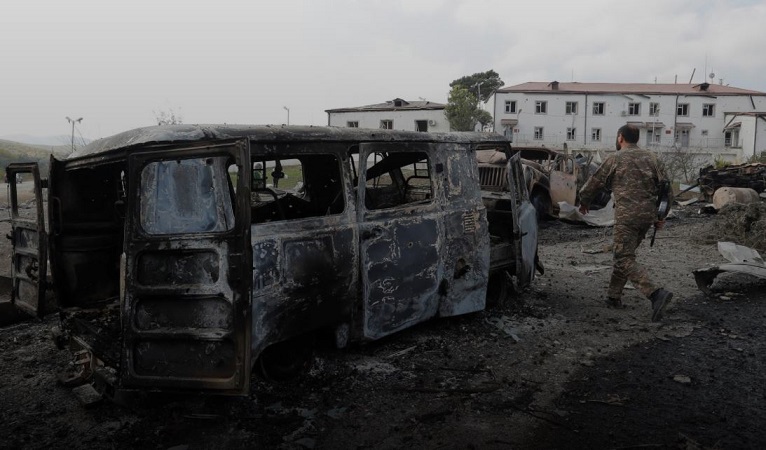 Armenia accused Turkey of blocking flights carrying emergency aid from using its airspace, and Azerbaijan’s president warned of “new victims and new bloodshed” from fighting over the mountain enclave that broke out on September 27.

Azeri President Ilham Aliyev demanded that Armenia “halt attempts to capture liberated territories back” and said his country would take all regions of Nagorno-Karabakh if Armenia “acts negatively.”

Last Saturday’s ceasefire, aimed at letting the sides swap detainees and bodies of those killed in the clashes, has had little impact on the fighting around Nagorno-Karabakh, a mountain territory internationally recognised as part of Azerbaijan but populated and governed by ethnic Armenians. 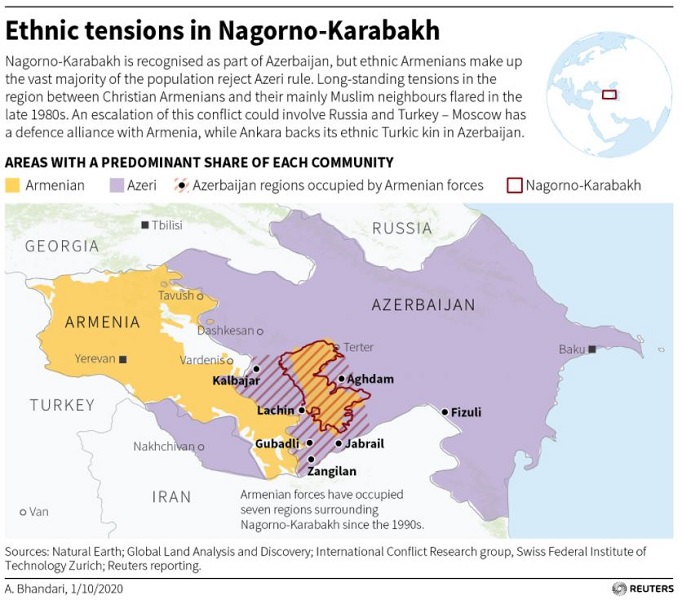 In the deadliest flare-up since a 1990s war killed about 30,000 people, 604 Nagorno-Karabakh defence personnel have been killed, ethnic Armenian authorities say.

On Thursday, three Azeri civilians were killed and three were wounded during a funeral in Azerbaijan’s Terter region when an artillery shell fell on a cemetery, presidential aid Hikmet Hajiyev said on Twitter.

That would add to Azeri estimates provided on Wednesday that 43 civilians had so far been killed. Baku does not disclose military casualties. The prosecutor’s office said earlier on Thursday that two civilians had been wounded in shelling of the Aghdam area. 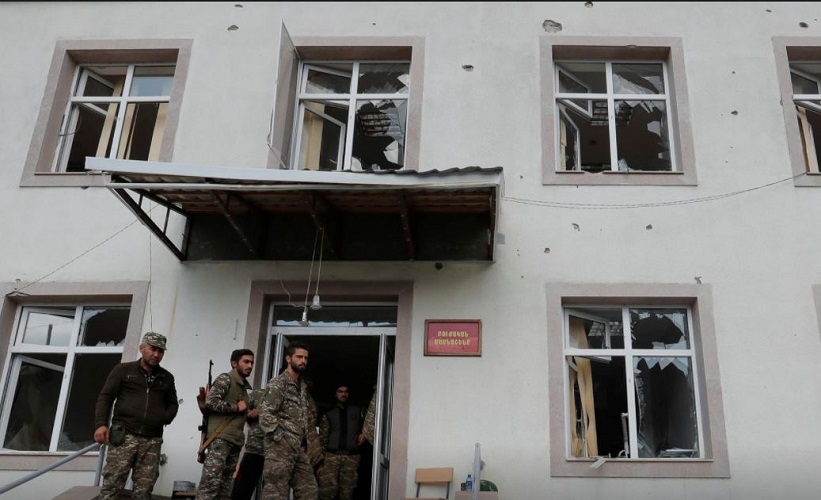 Aliyev says he believes Nagorno-Karabakh conflict will be solved

The Armenian prosecutor-general’s office said Azeri drones had killed two soldiers in the Vardenis region of Armenia on Wednesday, raising the Armenian military death toll to five. The servicemen were not involved in military action, it said.

A tweet from Nagorno-Karabakh’s ombudsman accused Azerbaijan of using heavy rockets to target civilian infrastructure in the town of Stepanakert.

Reuters could not independently verify the reports.

International organisations, including the International Committee of the Red Cross, have warned that the conflict, coming on top of the Covid-19 pandemic, could leave tens of thousands of people in need of aid over coming months. 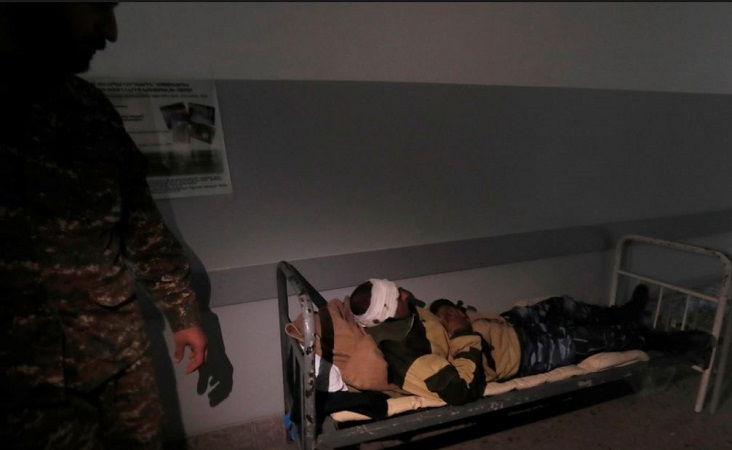 Zareh Sinanyan, Armenian High Commissioner for Diaspora Affairs, said the delivery of 100 tonnes of aid from the United States was being delayed as Turkey had prohibited Armenia-bound humanitarian aid flights over its airspace. 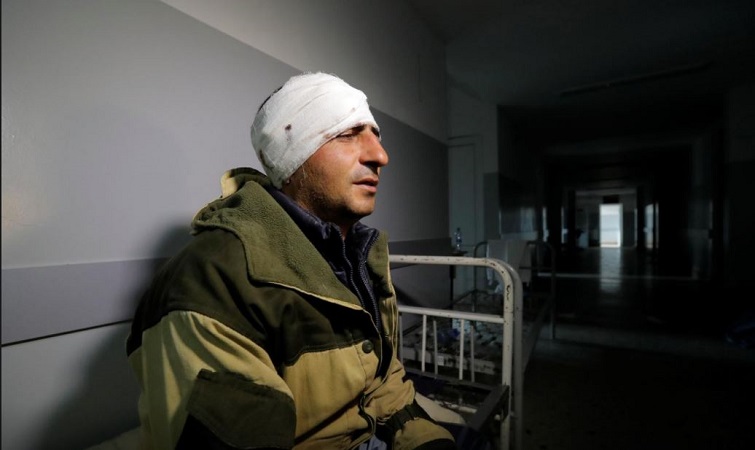 “We have grounds to claim that Turkey closed the air route deliberately,” Revazyan told Reuters, adding alternative routes over Russia or Georgia were being sought.

Turkey’s foreign ministry, which handles airspace issues, was not immediately available to comment.

Aside from humanitarian concerns, fears are growing of Russia and Turkey being sucked in. Turkey’s military exports to its ally Azerbaijan have risen six-fold this year, data shows, and Armenia has a defence pact with Russia. 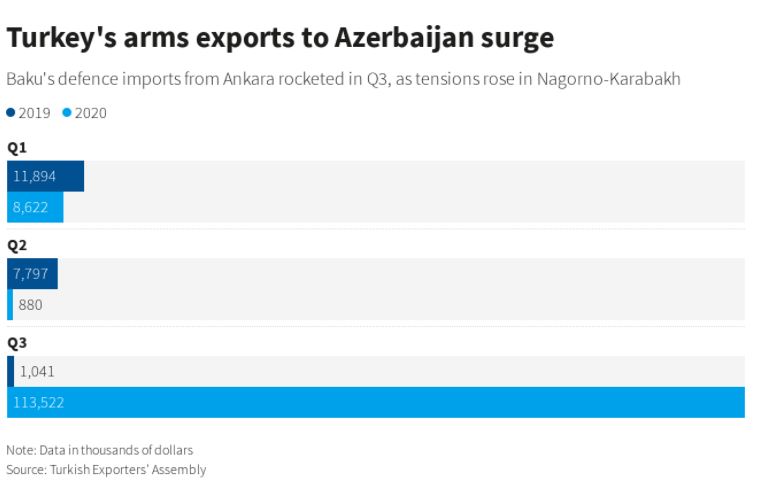 In a phone call on Wednesday with Turkish President Tayyip Erdogan, Russian leader Vladimir Putin expressed concerns about the participation of Middle East fighters in the conflict, though Turkey and Azerbaijan deny the presence of such fighters.

The fighting is also close to Azeri pipelines which carry natural gas and oil to international markets. Aliyev accused Armenia on Wednesday of trying to attack the pipelines, a charge that Armenia denied..