Russian photographer Sergey Gorshkov’s picture of an overjoyed tigress embracing an ancient Manchurian fir tree in the remote Siberian forest won him the 2020 wildlife photographer of the year award, The Guardian reported.

It took the photographer 11 months to capture the prize-winning moment through hidden cameras.

Gorshkov was named the 2020 wildlife photographer of the year by the Duchess of Cambridge at a ceremony held at London’s Natural History Museum.

The image was selected from more than 49,000 photographs, with Roz Kidman Cox, the chair of the judging panel, calling the photograph “a unique glimpse of an intimate moment deep in a magical forest”.

The Siberian tiger, also known as an Amur, is said to live in the woodlands of eastern Russia with a small number existing over the border in China and possibly North Korea. The population of the animal is threatened by hunters, poachers and loggers, which has also affected their prey mostly deer and wild boar.

Recent surveys have indicated that greater protection may have resulted in a population of 500 to 600.

Kidman Cox said the photograph told the story 'of the comeback of the Amur tiger in glorious colour and texture - a symbol of the Russian wilderness'.

“It’s a scene like no other,” she said. “Shafts of low winter sun highlight the ancient fir tree and the coat of the huge tigress as she grips the trunk in obvious ecstasy and inhales the scent of tiger on resin, leaving her own mark as her message,” Cox added.

Amur tigers have huge territories of up to 2,000km for males and 450km for females, which makes photographing them incredibly difficult.

Gorshkov installed his camera trap opposite this fir tree in January 2019 and struck gold in November. The wildlife photographer said he knew his chances were slim but he was determined to capture the image. He titled the image The Embrace.

Tim Littlewood, the Natural History Museum’s executive director of science and a jury member, said the Amur tiger population was still in a perilous place. But he added: “The remarkable sight of the tigress immersed in her natural environment offers us hope. Through the unique emotive power of photography, we are reminded of the beauty of the natural world and our shared responsibility to protect it.”

The award show, in its 56th year, is said to open on Friday with reduced admission and booking essential, showcasing one of the world's most popular photography exhibitions.

The exhibition will also include the image "the fox that got the goose", that got the Finnish teenager Liina Heikkinen the 2020 young wildlife photographer of the year award.

She took the picture on the island of Lehtisaari, Helsinki. As the title suggests, it shows a fox cub grimly hanging on to a barnacle goose it has caught, refusing to share it with siblings. 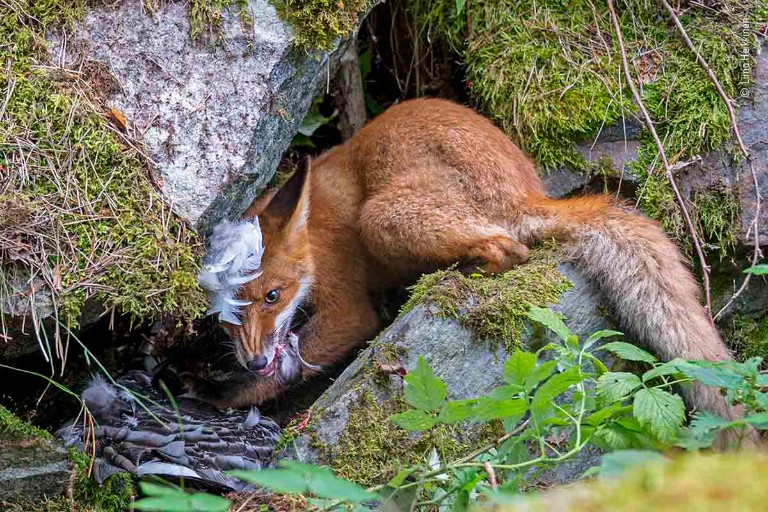 The fox that got the goose by Liina Heikkinen won this year's Young Photographer of the Year award. Photo Courtesy: London's Natural History Museum

Other images going on display include a stonechat perched on a flower stem; a clownfish with a tongue-eating louse doing just that; a chilled proboscis monkey posing at a sanctuary in Sabah, Borneo; a Manduriacu spider glass frog snacking on a spider; the good parenting skills of great crested grebes; a sand wasp and a cuckoo wasp both about to enter their neighbouring nest holes; and a rare picture of a family of Pallas’s cats in north-west China.