PCB announ­ces list of 28 player­s contra­cted for the 2nd half of the year.
By Umar Farooq
Published: August 8, 2011
Tweet Email 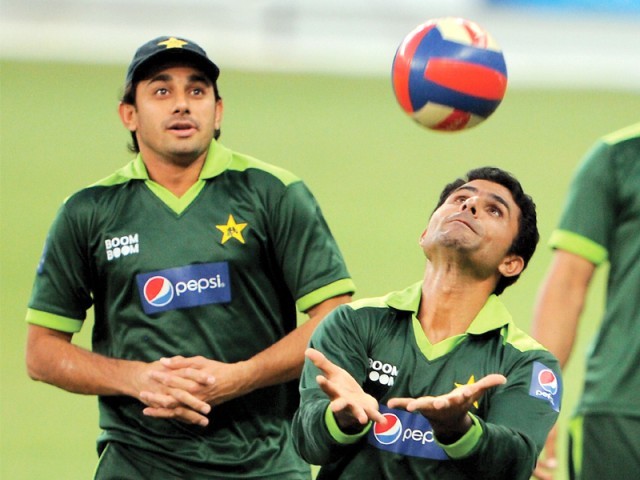 Just days after lashing out against the PCB, Razzaq finds himself with a central contract although not in the same league as Ajmal. PHOTO: AFP

The Pakistan Cricket Board (PCB) may have finally called time on wicket-keeper Kamran Akmal’s career by overlooking him for a central contract as it released a list of 28 contracted players for the second half of 2011.

Kamran was included in Category A in the previous list and his omission, following his omission from the recent Pakistan squads, does not come as a surprise given his show behind the stumps. Former captain Shoaib Malik –currently under the integrity committee’s scanner – was also overlooked from the list that features several young cricketers in a sign that the board is finally looking to the future.

The three-man committee comprised chief selector Mohsin Khan, game development director and former team manager Intikhab Alam, and Director International Cricket Zakir Khan shortlisted the list that does not include Shahid Afridi either given his retirement from international cricket in May.

“The committee recommended the list of players to the PCB chairman and after mutual consensus, a total of 23 players and five stipends will be contracted for the next six months,” Alam told a press conference at the PCB head-quarters in Lahore. “The inclusion of the players was based on the criteria that included performance in the last six months, fitness and discipline. Since the contract is only for the six months, those who are dropped have an incentive to improve themselves.”

Kamran was dropped from the national side after a poor World Cup with his shoddy work behind the stumps hampering Pakistan’s progress on various occasions.

“Kamran was dropped mainly because of the World Cup performance. As for Malik and Danish Kaneria, until they are cleared by the integrity committee, a meeting of which is scheduled for August 15, they will not be considered for the contracts.”

Seniors make up Category A

Out-of-favour all-rounder Abdul Razzaq, who recently lashed out against the PCB for the tour snub, has been handed a B contract. Two wicket-keepers – Adnan Akmal and Sarfaraz Ahmed – were named in the list as well, both getting a C contract. Adnan, who was not part of the tour of West Indies, will make his Pakistan comeback against Zimbabwe after Mohsin admitted the selection committee’s mistake of dropping him for the Caribbean.

Category C mainly focuses on youngsters and prospects for the team but Alam said there was still a need for seniors such as Razzaq while also handing left-arm bowler Sohail Tanvir a contract as well.

“Razzaq is demoted from the top category but players like him and Gul are still needed. The duo has been rested for the Zimbabwe tour while Tanvir, who has now recovered from various injuries, has been offered a contract after good show in domestic cricket.”

As reported in The Express Tribune yesterday, the contract amount and the match-fees, that saw no increase in the last two years, remained the same this time as well with hopes of a raise in January 2012.

Only 13% of Pakistanis ‘dissatisfied’ with telcos: Poll