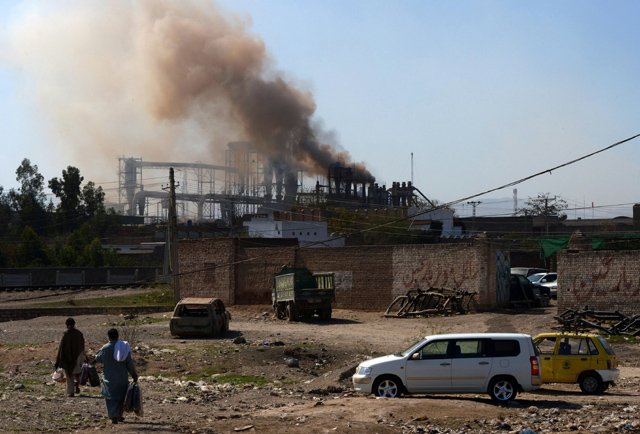 This photograph shows Pakistani residents walking near a factory on the outskirts of the northwestern city of Peshawar. Pakistan's cities are gasping for clean air amid dire warnings from the World Bank, but officials say they are helpless to combat the looming calamity due to a lack of basic data. The fast-growing country is home to some 200 million people and suffers from some of the worst air pollution in the world, thanks to its giant population plying poorly maintained vehicles on the roads and unchecked industrial emissions. PHOTO: AFP
ISLAMABAD:

Use of clean energy is the only way forward for ensuring an environmentally secured future for Pakistan, said speakers at a meeting of think tank Institute of Policy Studies (IPS) Islamabad held on Tuesday.

The Global Climate Risk Index has placed Pakistan on the fifth spot on the list of countries most vulnerable to climate change in its annual report for 2020, the meeting noted according to a statement issued by IPS.

The use of fossil fuels which includes coal, gas and fuel oil on the other hand is detrimental for the country’s environmental future. It is thus imperative for the country to move to renewable energy sooner rather than later, wherein a failure in doing so will further aggravate the existing food, water and energy security related threats.

Terming the use of clean energy as the only way forward for ensuring an environmentally secured future for Pakistan, it was stressed that roadblocks in the way of wider use of clean energy should be addressed timely since it is not only the most efficient, feasible, reliable and safest mean of energy generation, but simultaneously will contribute to reducing reliance on imported fuels and harnessing the immense indigenous renewable energy resources available in Pakistan. In parallel, Pakistan is already 5th most vulnerable country to climate change and could not afford to continue the existing trajectory.

In this regard, the excessive rains in many parts of the country including Karachi were only a recent highlight of the alarming threats posed to the country—emphasizing urgent need for action to address the issue on priority basis.

It was pointed out in the meeting that the reason for not benefitting from this immense renewable energy potential in Pakistan lies in flexibility constraints and lack of commitment on behalf of relevant authorities, who neither had technical expertise nor the intent to make this shift. Further, it is more convenient for the grid operators to manage the grid dominated by base load power plants regardless of its detrimental impacts on environment, and hence they intend to continue the business as usual.

It was also pointed by energy experts that the on-ground steps currently taken by the government were not only contradictory to the targets set in the 2019 policy for ‘Alternative and Renewable Energy’, but also poorly contrasted to the global and regional renewable energy advancement.

For instance, the coal power plants installed in Sahiwal and Hub, and the other two being installed in Tharparkar and Gwadar were a direct contradiction of the mentioned policy. The speakers said that an argument is made frequently that when Pakistan has such huge reservoirs of coal at its disposal, why should it not be utilizing it to generate energy.

The contrasting reality however remains that Pakistan’s reliance on coal fired power plants remain skewed toward imported fuels and coal, the cost of which is nearly at par with IPPs and has significantly contributed to the swelling of circular debt—now reaching trillions from billions.