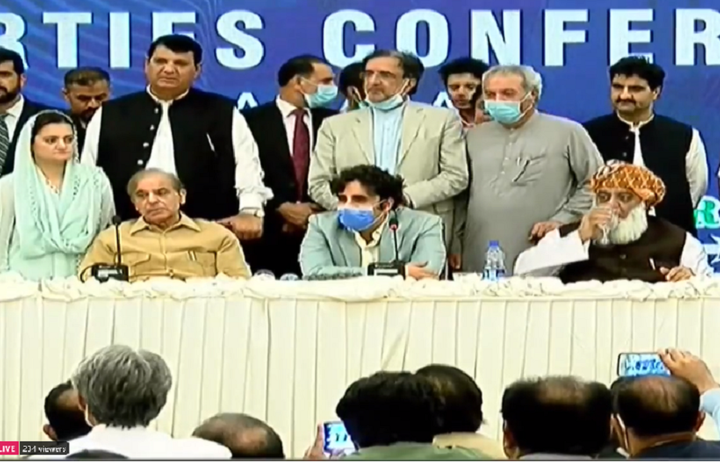 The opposition parties on Sunday upped the ante against the PTI led federal government as they demanded immediate resignation of Prime Minister Imran Khan, while announcing an alliance – the Pakistan Democratic Movement (PDM) – that will begin a country-wide protest against the government.

In the PPP-hosted All Parties Conference (APC), the opposition also ratcheted up its narrative against alleged rigging in the July 2018 general election and demanded that the powerful establishment should not only refrain from interfering in politics but also confine its role as defined in the Constitution.

Through a 26-point resolution and a seven-point action plan issued after the APC in a press conference, the opposition parties put forward their demands, including free, fair, transparent elections without any role of the armed forces and agencies.

They also announced their action plan to build pressure on the government. In the first phase, the opposition parties would muster support from lawyers, traders, farmers, students, civil society, media and people and hold joint rallies in all the provinces by October

In the second phase, they will hold bigger protest rallies in December and will go for a “decisive long march” to Islamabad in January 2021.

They said the opposition would utilize all democratic, political and constitutional options available in and outside the parliament, including a no-confidence move and dissolution of the assemblies at an appropriate time.

For this purpose, a special committee was being formed, which would finalize the action plan.

Former prime minister Nawaz Sharif, former president Asif Ali Zardari as well as the top leadership of the PPP, the PML-N, the JUI-F, the NP, the ANP, the QWP, PkMAP, the BNP-M and Jamiat Ahle Hadees spoke at the APC.

The opposition parties also demanded that a new accountability law should be made in line with the recent judgment of the Supreme Court, recommendations of the Council of Islamic Ideology and reports of the human right watch in order to ensure accountability across the board.

They called for forming a “Truth Commission” to write the actual history of the country since 1947.

They also decided to form a committee that will review the Charter of Democracy and present a strategy which is in line with the Quaid-e-Azam’s statements and 73’s Constitution to lay the foundation of a modern Islamic welfare state.

The opposition parties also demanded that the issue of ‘missing person’ must be resolved and such people must be presented before the courts. Moreover, it sought to restore civil authority in Balochistan and remove all paramilitary Frontier Corps (FC) check posts.

Bilawal while responding to questions during the press conference said the PDM wants a non-political establishment as the Constitution does not allow the establishment to be involved in political matters.

He said the opposition has clearly listed all the options in the resolution and action plan, adding that PDM will start working from today [Monday] and will continue to work towards its goal of seeing real democracy in Pakistan.

Addressing the ACP, Bilawal asked how a society can evolve when people in the country are not allowed to record their protest, present their statements to the media and elected representatives are not allowed to speak in the assembly.

PML-N President Shehbaz Sharif said the incumbent government’s survival is a threat to Pakistan's existence. Dictatorships in the country’s history had not only put a black mark on democracy but also damaged the judiciary, he said.

Shehbaz said after July 2018 polls a “selected” government came into power and the “selected” prime minister had promised to the nation that his government would investigate discrepancy in the elections and alleged pre-poll rigging but he never honored his promise.

The APC while noting that the government has made the life of a common man difficult through inflation, unemployment and imposition of taxes demanded – apparently from the same government – that all these issues be resolved and prices of essential commodities be immediately reduced.

It stated that the ruined economy due to the government policies has become a threat to the country’s defence and sovereignty, adding that the opposition parties fully defend the 1973 Constitution, 18th amendment, and the current NFC award, and make no compromise on it.

The joint statement of the opposition parties rejected the idea of imposing a presidential system in the country, saying it considers parliamentary democracy as the system that guarantees country’s protection. It vowed to protect the supremacy of the parliament.

On foreign policy front, the opposition held the government accountable for annexation of Kashmir and expressed grave concern on what it called “failure of Afghan policy”. It demanded that censorship on media and bogus cases against media persons, politicians and political workers must end.

It noted that the number of terrorism cases has increased because the National Action Plan (NAP) was not being implemented. It urged the government to implement the same in letter and spirit.

Declaring the parliament a rubber stamp, the PDM said the opposition will not cooperate with the government in the legislative process anymore.

The APC demanded that before turning the Gilgit-Baltistan region into a province, the government must hold a free, fair and transparent election there and build national consensus on the issue. It also demanded the end of internment centres in Khyber-Pakhtunkhwa (K-P) province.

The opposition also condemned bogus references and cases made against judges, saying such tactics are against an independent judiciary and a threat to national security.