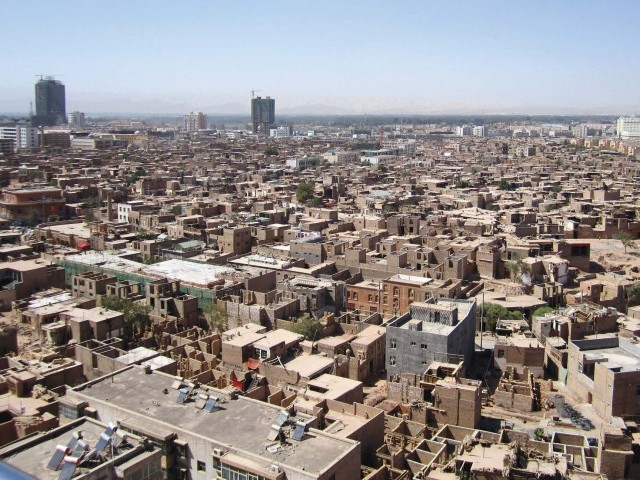 The old city of Kashgar, in northwest China’s Xinjiang region. The old structures can be seen in the foreground as building cranes loom in the distance. PHOTO: AFP

KASHGAR, CHINA: The call to prayer echoes across the old Silk Road city of Kashgar, drawing believers into the main mosque under the watchful eye of armed police, as building cranes loom in the distance.

It’s the end of a day of fasting in this old trading post between East and West – a remote city in China’s far-western region of Xinjiang that is reeling from recent deadly attacks that laid bare long-standing ethnic tensions.

Undaunted, authorities are pressing ahead with plans to turn the restive city into a modern economic powerhouse – to the dismay of many of the mainly Muslim Uighur minority, who fear it will have serious repercussions for them.

“This Kashgar is a new Kashgar, it’s no longer an old city. Our culture has gone,” lamented a 24-year-old Uighur shopkeeper who refused to be named because of the sensitivity of the issue.

The ancient, traditional Islamic part of the city is already in the throes of mass modernisation, as bulldozers tear down old mud-brick houses to replace them with lookalikes made of concrete and brick.

China’s communist government says the seven-billion-yuan ($1.1-billion) project aims to improve living standards for inhabitants of the old city, where it says many of the insalubrious houses would topple in an earthquake.

“Kashgar is located in a seismic zone so it’s important that all houses are quake-safe. Our (new) houses can withstand an 8.0-magnitude earthquake,” said Aysajan Ahat, an official in charge of the project.

But Uighurs who live there point out the old buildings have stood steadfast for hundreds of years and that they have little control over the design of their new homes.

Authorities deny this, saying residents are consulted every step of the way.

Ahat also insists that all demolished houses are being replaced, but residents say the old city is much smaller than it was.

“The programme of demolition and rebuilding is so messy that it is impossible to say whether all houses demolished are being replaced,” said Michael Dillon, the Britain-based author of the book “Xinjiang, China’s Muslim Far Northwest”.

Elsewhere in the city, high-rises are springing up everywhere. A scale model of what planners want the city to look like – on display at an exhibition – shows the old town surrounded by a sea of modern tower blocks.

The government last year designated Kashgar a special economic zone, keen to boost investment in a city that stands at the crossroads of central and southern Asia.

It wants to push the city’s annual GDP growth rate, which already exceeds 20 percent, to 25 percent over the next nine years, and plans to increase the population from the current 600,000 to a million by 2030.

Already migrants from other parts of China – many of them members of the majority Han ethnic group – have moved to Kashgar, lured by the prospect of making money in the fast-growing city.

But this influx has fuelled resentment among Xinjiang’s roughly eight million Uighurs, many of whom complain that Han Chinese get better jobs and pay and say that traditional Uighur culture is being deliberately diluted.

This resentment has spilled over into bloody violence almost always directed at Han Chinese or security forces.

The Chinese government blames much of the violence in Xinjiang on separatist forces, but some experts say there is little evidence that organised terrorist groups operate in the region, adding unrest stems from economic frustrations.

Dillon said that the government urgently needs to find a way to integrate Uighurs into the modern economy. Many Uighurs do not speak Mandarin, China’s official language, and have low levels of education. “To do this (integration) successfully they will need to negotiate with grassroots representative of the Uighurs,” Dillon said. “But at the moment there are no legal organisations that they can negotiate with.”