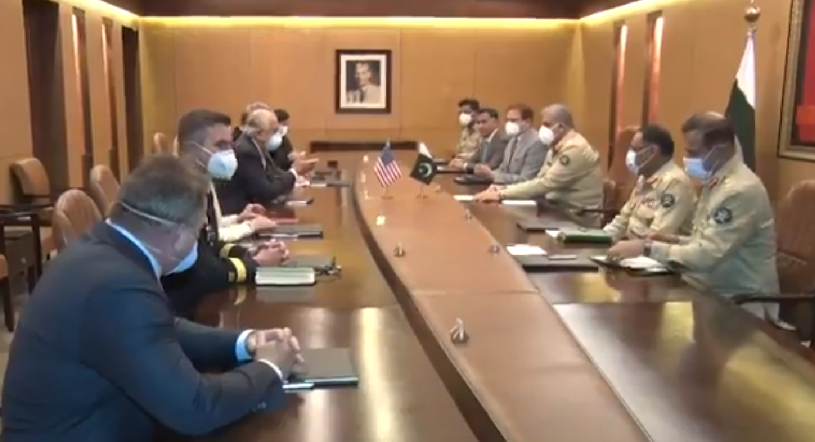 US Special Representative for Afghanistan Reconciliation Zalmay Khalilzad on Monday told Pakistan Army chief Gen Qamar Javed Bajwa that the success achieved in the Afghan peace process would not have been possible without the “sincere and unconditional support” of Islamabad.

Khalilzad, who arrived in the federal capital earlier in the day accompanied by a three-member delegation of senior US officials, met the chief of army staff at the GHQ and appreciated Pakistan’s key role in the historic peace talks opening between the Afghanistan government and the Taliban in Doha.

The imminent peace deal is the result of a 14-month long painstaking negotiation process — brokered and facilitated by Pakistan — between the US and the Taliban.

The US interlocutor reached Islamabad from the Qatari capital to discuss the peace talks as Pakistan is one of the key players working to restore peace in the war-torn Afghanistan where thousands have lost their lives in nearly two decades of conflict.

According to the military’s media wing, Gen Bajwa told the visiting dignitary that Prime Minister Imran Khan had given a clear vision regarding peace and connectivity in the region.

"All elements of national power are united towards making that vision a reality to ensure long-awaited peace, progress, and prosperity in the region," an Inter-Services Public Relations (ISPR) press release quoted the army chief as saying.

...COAS said that Prime Minister Imran Khan has given clear vision regarding peace and connectivity in the region and all elements of national power are united towards making that vision a reality to ensure long awaited peace, progress and prosperity in the region. (3/3)

Pakistan's Special Representative for Afghanistan Ambassador Mohammad Sadiq was also present during the meeting and other matters of mutual interest and regional security also came under discussion.

The Afghan government has pressed its calls for a truce with the Taliban, reiterating its desire for a long-term ceasefire at the talks in Doha.

The two sides are in the early stages of meetings in the Qatari capital trying to hammer out a deal that would the bloodshed in Afghanistan to a close.

The Afghan government and the US called for the warring sides to lay down their arms at Saturday's opening ceremony.

But the Taliban did not mention a truce as they came to the negotiating table.

The head of the peace process for the Afghan government, Abdullah Abdullah, suggested however that the Taliban could offer a ceasefire in exchange for the release of more of their jailed fighters.

Afghan presidential spokesperson Sediq Seddiqi tweeted on Monday that the presence of government negotiators at the talks "is aimed at achieving a ceasefire, ending the violence and ensuring lasting peace and stability in the country."

Pakistan has proposed a four-point way forward for the Afghan peace process that envisaged continued support to Afghan-led and Afghan-owned process while respecting consensus emerging from intra-Afghan talks and ensuring violence never returned to the country nor was the Afghan soil used by terrorist outfits.

The strategy was proposed by Foreign Minister Shah Mahmood Qureshi, who attended the opening ceremony of historic intra-Afghan talks in Doha via video link.

He proposed the following four-pronged strategy: continuing to support the Afghan-led and Afghan-owned peace process while respecting the consensus that emerges from intra-Afghan negotiations; ensuring that Afghanistan neither witnesses the violent days of the past nor becomes a space for elements who would harm others beyond its borders; deepening and sustaining economic engagement with Afghanistan for its reconstruction and economic development; and ensuring a well-resourced, time-bound return of Afghan refugees to their homeland with dignity and honour.

The US struck an agreement with the Taliban in February that will see it withdraw troops from Afghanistan.

Abdullah, chairman of Afghanistan's High Council for National Reconciliation, has stressed that the process "could be the start of history made in the coming future -- and hopefully sooner rather than later".

During a speech at the opening event, Taliban co-founder Mullah Abdul Ghani Baradar repeated the message that Afghanistan should be run according to Islamic law, highlighting a likely sticking point.

The US special envoy on Afghanistan, Zalmay Khalilzad, said Afghans should learn from the failure to implement a political reconciliation process in the country after the Soviet Union completed its withdrawal in 1989.

"The Afghans who had sacrificed so much to push the Soviets out... failed politically by going to civil war with each other. I hope the Afghans are paying attention, learning the lessons of that period," he told Al-Jazeera TV.

"That's why we have started this peace process."

The US-backed negotiations come six months later than planned, owing to disagreements over a controversial prisoner swap agreed in February's deal between the US and the Taliban.

Under the terms of that agreement, all foreign troops must leave Afghanistan by the spring of 2021, in exchange for security commitments from the militants.

In addition, 5,000 Taliban prisoners have already been released in exchange for 1,000 Afghan troops.

US President Donald Trump, who faces elections in less than two months, is eager to fulfil promises to end America's longest war with the Taliban.

Doha’s state media reported on Sunday that Qatar’s ruler Emir Sheikh Tamim bin Hamad al-Thani met representatives of both the Afghan government and the Taliban to wish them success during peace talks taking place in the Gulf state.

(With input from AFP)

Good work done by Pakistan, let peace prevail in Afghanistan, and the enemy should not get space there to destabilize Pakistan. Pak Afghanistan friendship zindabad.