Rescue operations underway to take residents out from the debris 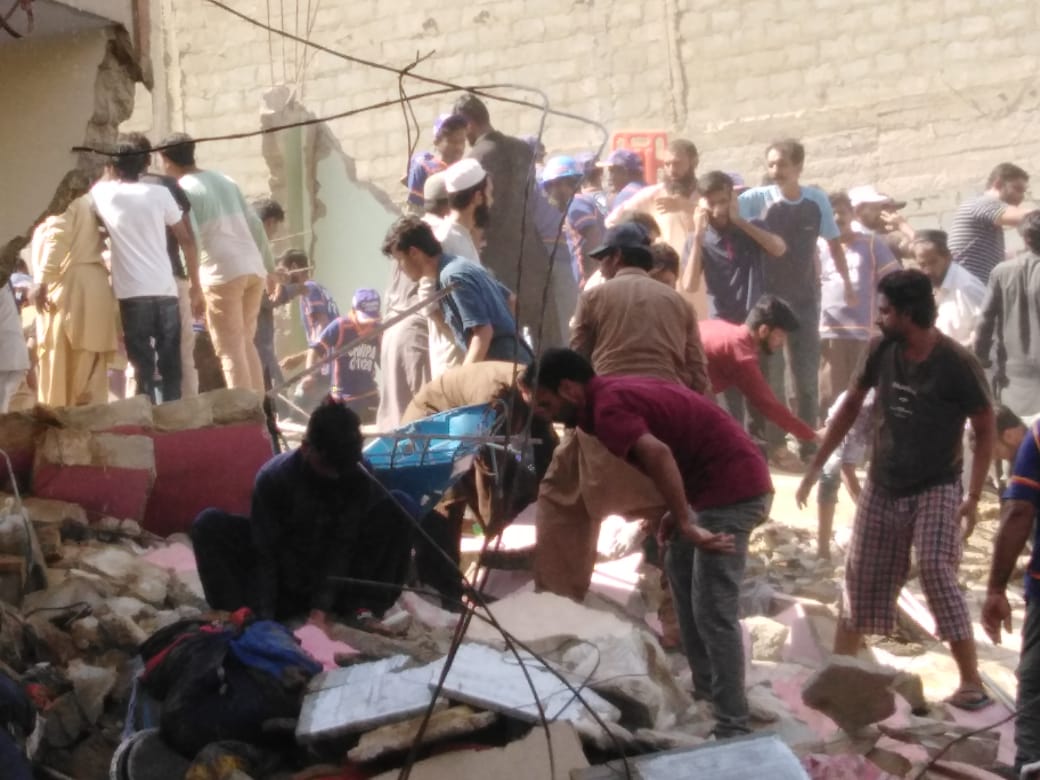 A four-storey residential building collapsed in Korangi’s Allahwala Town on Thursday, killing at least four persons and leaving several others wounded. More people are feared to be trapped in the rubble, with rescue efforts continuing late into the night.

As dust billowed in the air after the structure caved in, police, Rangers, local administration officials and rescue volunteers rushed to the spot. Personnel from the Pakistan Army also took part in the operation to find those buried in the debris.

Army personnel used thermal sensors and motion sensors to try to locate those buried in the rubble based on the direction from which their voices were coming, while rescuers carefully removed debris so as to avoid further injury to those trapped underneath.

The body of a child was retrieved from the rubble and shifted to Jinnah Postgraduate Medical Centre, along with at least six injured residents. The deceased was identified as 15-year-old Waqas, while the injured included Ayub, his two teenaged daughters Nazish and Kiran, Rani Iqbal, her 14-year-old daughter Reema, and Nisha. Another injured teenager, Mehek, was also rushed to the Indus Hospital.

Speaking to The Express Tribune, Waqas’ father Muhammad Hanif said he had rented a shop on the building’s ground floor, adding that the builder, Muhammad Ayub, also lived in a portion on the ground floor. “When it appeared the building was unstable after the rain, we wanted to leave, but the builder guaranteed it would not collapse,” he lamented, adding that Ayub was constructing pillars in the structure.

He added that Ayub’s wife and two daughters were stuck in the debris as well.

arachi Commissioner Sohail Rajput, who was present at the site, told The Express Tribune that army engineers were engaged in the efforts, while more rescue teams were also arriving. He stated that it was difficult to accurately estimate how many people were in the building at the time, but added that the local administration was trying to save as many lives as possible.

According to area residents, recent monsoon rains had led to the accumulation of rainwater in the area, standing stagnant for several days. This reportedly weakened the building’s foundations and led to its tilting forward – and, ultimately, to its collapse.

Residents had filed complaints about the weakened structure with the Korangi district municipal corporation as well as the Korangi deputy comissioner’s (DC) office.

Prior to the incident, the DC, Sheheryar Memon, had visited the site and declared the building unfit. He ordered its evacuation and while some families had moved out of their apartments, a number of residents were still in the building when it collapsed.

Talking to The Express Tribune, Memon said he had given directives for the building to be evacuated two days prior to its caving in. “The building was weakened due to the recent rainfall,” he said. “While most of its occupants had [temporarily] relocated after a contractor assured them it would be repaired, two families were still living there.”

He went on to say that one of the neighbouring buildings was seriously damaged, with its foundations weakened due to the collapse, and had also been vacated, while another was partially damaged.

The Sindh Building Control Authority (SBCA) has also declared the structure as an illegal construction, with SBCA director-general Ashkar Dawar claiming it was built on a china cutting plot, without any building plans being approved by the relevant authorities.

Located near Rashidia Mosque, the building in question was built on an 80-yard plot, with two apartments on each of its four floors, while the ground floor had two shops and an apartment as well.