Pakistan among countries with the worst online censorship

Bollywood stands in solidarity with Rhea Chakraborty after arrest

Sonya Hussyn is 'sick' of the 'Ertuğrul' debate

Celebrity urged everyone to let the actors live in peace

Actor Sonya Hussyn recently uploaded an Instagram story addressing the everlasting debate on the importance given to the Turkish television series Diriliş Ertuğrul in Pakistan.

Expressing her disdain towards the continual slander the Turkish actors receive at the hands of particular Pakistani celebrities and the counter-slander the Pakistani actors invite, Hussyn wrote, "Sick of this Ertuğrul debate."

She went on to ask her followers to "learn to appreciate and not degrade," further urging them to be kind, have grace and speak love. 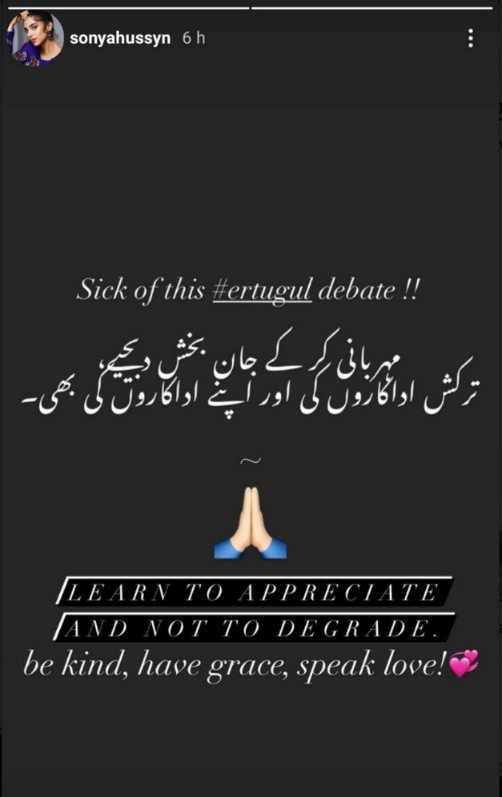 Not long ago, Hussyn landed herself in hot waters due to a comment she made on Instagram regarding her ongoing drama serial, Saraab, in which she is essaying the role of a schizophrenic patient. The serial had not went on air at the time.

In an effort to promote the project, she posted listed down several mental illnesses that can be a symptom of schizophrenia. The poster also featured 'autism' on the list. In an attempt to correct the celebrity, a fan, who also claimed to be a mother to two autistic children wrote, "Autism is not a mental illness, it is a disorder."

To this Hussyn replied, "It is one of the symptoms in schizophrenia." Her comment led to a barrage of criticism and trolls on various social media platforms. In response, Hussyn encouraged the critics to send in their queries regarding the argument for a healthy discussion.