The state of Pakistan Railways

The state of Pakistan Railways

The Pakist­an Railwa­ys (PR) is anothe­r one of the loss-making giants of the state sector.
By Editorial
Published: August 7, 2011
Tweet Email 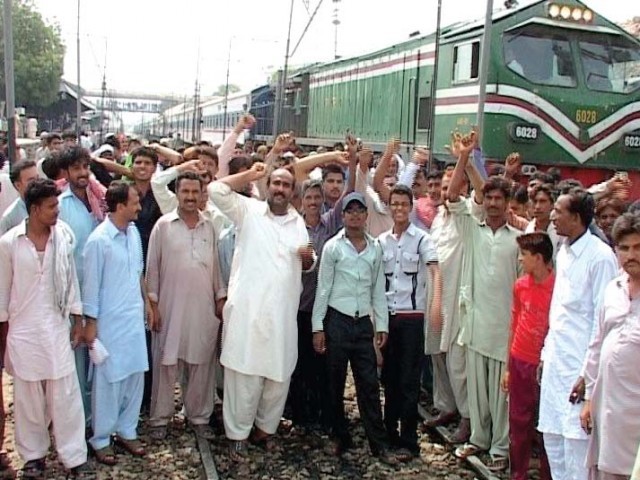 The Pakistan Railways (PR) is another one of the loss-making giants of the state sector. PHOTO: EXPRESS/FILE

An embittered railways minister, Ghulam Ahmad Bilour, predicting the death of his portfolio on a daily basis because no one in Islamabad listened to him, has finally been promised a Rs11 billion bailout fund. Out of this, Rs6 billion will be raised from the banks as commercial loans. The Pakistan Railways (PR) is another one of the loss-making giants of the state sector, dragging the national economy down and filling the common man with despair. The abbreviation PR is ironic because the railways is one sector where the state is getting its worst PR (public relations).

PR needs a thousand locomotives but has only a couple of hundred, out of which most break down on the way or cannot run because diesel is hard to purchase owing to the circular debt issue in the economy. TV networks are showing people suffering at railway stations, putting PR property to the torch and beating up the staff whose salaries are usually in arrears. Trains are late by 10 to 12 hours on average, making the passengers rue their decision to rely on PR — those who used to travel by train in the past are down to half.

Mr Bilour wanted the entire Rs11 billion package from the State Bank. PR, which made a loss of Rs26 billion last year, is not likely to recoup and repay unless it raises tariffs by 40 per cent, which it won’t. The high interest rate on the package will be footed by the government while PR goes to China to buy some of the 150 locomotives it plans to acquire and to buy spare parts to repair the earlier ones bought from China that are rotting in its godowns. The news for passengers is not good. Even if PR succeeds in clinching another deal with China, it will take six months for it to get enough engines on track.

State sector enterprises are rarely successful because the subsidy they receive is likely to make them complacent and not profit-driven. Add to that trade and labour unions and corrupt non-specialist politicians who run PR and you have the beginnings of a systemic failure and finally a failed state. PR is amongst the biggest employers in the country along with Wapda and both are in the financial doldrums. In addition, PR is the richest in the country if you count the going rate of the property it owns. Politicians regard it as a juicy ministry to run because of the lucrative contacts they get to enjoy with squatting mafias and a steadily thieving bureaucracy.

Pakistan and India inherited the world’s best railways network from the British. Pakistan has allowed its tracks to decay and began shedding branch-line trains in 2007 to cut losses. On the other hand, India came out of its loss-making phase in 2006 and posted a profit of $2.5 billion in 2008. It is today the world’s largest railway network running on its own steam.  Pakistan is down to its last financial breath but its foreign policy remains warlike and unpragmatic, accepting isolation when it should be networking with the entire world against terrorism. No one trusts that money given to Pakistan will be correctly spent because it is more interested in accumulating fissile material for making more bombs. PR is indebted to the tune of Rs80 billion while its overdraft to the State Bank exceeds Rs40 billion. It can’t pay its pensioners on time — an amount that comes to Rs19 billion — and its working manpower at times gets paid only from the sale of tickets.

It is doubtful that the Rs11 billion bailout will have any change for the better. Those who travel on it don’t have much of an option, road travel has become unsafe because of the sharply worsening law and order in the regions of transit and airlines are too expensive for the majority of the population. Even if chunks of PR are to be privatised, it first needs to start becoming functional. Alas, the PR bureaucracy still thinks that all that needs to be done is to privatise the loss-making routes when in reality the organisation needs an overhaul.