Italy tops 1,000 daily cases for first time since May

Photo of engineers at the Luxembourg Pavilion

Although women have come a long way in every aspect of life since the suffragette movement of the 1900s, the fight for equality still has a long way to go. Even in developed countries which have made significant progress when it comes to gender equality, biased attitudes still prevail in all fields of life, including science.

Research has found that gender discrimination even crept into printed imagery at an international science diplomacy event, where women and racial minorities were underrepresented, while images of white men were glorified and highlighted.

The report, featured in Gender, Technology and Development, examined images exhibited at the pavilions of ten European countries at the Astana Expo, a 2017 science event held in Kazakhstan which brought together companies from around the world to showcase scientific advancement.

Using gender audit to analyse permanent imagery of science across 10 country pavilions at the event, researchers at Nazarbayev University found that none of the selected countries showed gender-equal imagery. 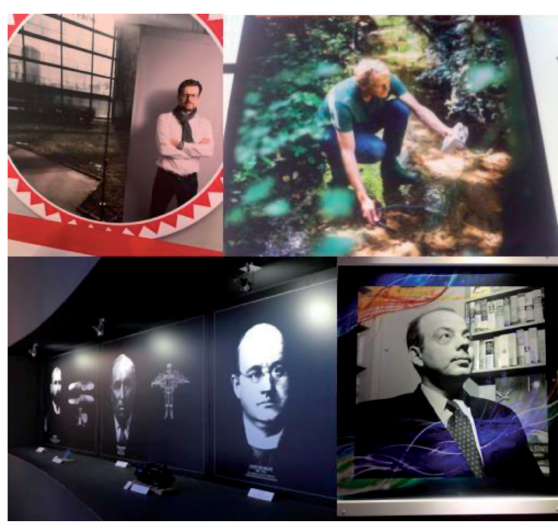 Germany, Greece, Italy, and Luxembourg displayed no women as scientists in their images, while the only woman Spain presented was shown in a kitchen to demonstrate innovations in improved stoves. Although Austria, France, Hungary, and Slovakia displayed some women as scientists, they still heavily relied on imagery of men. Per the report, out of Austria’s 15 individual images, for instance, only one was of a female scientist.

According to the researchers, even at a major international event which had been exceptionally curated for a global audience, the representation of women was not equal to that of men. Instead, men continue to be highlighted as bearers of knowledge, particularly in science and technology.

The report noted that even when scientific images included women, they were often portrayed as audience members rather than scientists. Women were shown with smiles spread across their faces, whereas men were the main focus of the images and were shown to have serious facial expressions. Moreover, scientist displayed were primarily white, whereas racial minorities were portrayed as audiences or beneficiaries.

Gendered imagery at major events can provide insight into an organisational or country perspective. The portrayal of people in imagery reinforces ideas and teaches audiences 'who are allowed to take-on various roles,' (e.g., doctors, teachers, or scientists), the researchers explained.

Speaking to The Express Tribune, study author Dr Anna CohenMiller, who holds a PhD in Interdisciplinary Learning & Teaching and has a focus on social justice and equity in multicultural educational contexts, said that a decade’s worth of research has proved that an imbalance of gender-based imagery perpetuates stereotypes of what it means to be a woman or a man, as well as the ability and potential of each.

“The stereotypes are then reproduced in schools, in the workplace, and in homes, collectively disadvantaging women in all spheres of life,” Dr CohenMiller stressed.

“Imagery informally (and formally) teaches audiences the value of individuals. If men are primarily shown as breadwinners, as “geniuses,” and as award winners and leaders, how are women supposed to compete against unconscious bias in societies?”

She said that even though a lot of European Union states are instituting efforts to improve gender balance in science, technology, engineering, and mathematics (STEM) fields, which is an important step, parity in the workplace – an equal number of women and men – has little to do with equity considering that the workplace pays women significantly less than men.

“STEM fields have been changing to allow for women to enter different programmes and succeed. However, a simple baseline of how science is still associated with men is to refer to the Draw-A-Scientist test,” Dr CohenMiller said.

In the test, which was first introduced in 1983 and has been reproduced many times over, young children are asked to simply draw a picture of what a scientist looks like.

“There have been improvements over time, with children – mostly girls – now drawing images of women as scientists. Yet, if boys are still primarily drawing men as scientists, and almost half of girls still draw men as scientists, it is much more likely that a boy will study science and will get hired as a scientist, considering that they fit the perception – or the image – of what it means to “be” a scientist,” she said.

According to Dr CohenMiller, another important finding from these studies is that as girls get older and have a chance to receive more feedback about their abilities, both negative and positive, they draw women as scientists much less frequently.

Speaking about the importance of gender balance in science, the founders of UnbalancedInSTEM – a podcast to understand the landscape of gender and diversity imbalances in STEM – said that ensuring equal representation and opportunities for people of all backgrounds and experiences creates a more successful workplace environment.

“A big challenge for the science, engineering, technology and maths (STEM) workforce is the problem of the “leaky pipeline,” the issue with retention of women as they work their way up to more senior positions, and this is a key area for science that needs to be addressed,” said Drasti Patel, Rebecca Shutt, and Jennifer Hack, scientists and hosts of the UnbalancedInSTEM podcast.

Citing statistics from the United Kingdom, they said that less than a quarter of STEM workers are female, a number which has stayed constant for the last five years.

“This is interesting, because looking at STEM A-Level results (except Chemistry), more girls get A* to C grades than boys, so even though the girls are outperforming the boys at school-age, there is a clear gap in allowing them to access STEM careers.”

They added that the gender gap becomes more complex if the statistics are broken down by subject: 41 per cent of scientists (chemists, biologists, physicists) are female, whereas only between 8 to 12 per cent are engineers.

“If you look at academia, the number of female engineering and tech grads has stayed constant at 15 per cent between 2015 and 2018,” they said. “In the UK, only seven per cent of physics professors are female and only 17 per cent are lecturers. This highlights that there is more to be done, especially in physics, engineering, and computer sciences subjects.”

Referencing the study and shedding light on how gendered imagery at international scientific events could be harmful to society and perpetuate stereotypes, the team said that small changes of imagery used in advertising, events, and media have huge potential for impacting the audiences they are targeting.

“We have talked a lot about the “You can’t be what you can’t see” phenomenon on UnbalancedInSTEM, which applies in the case of this study,” they said. “Whether we realised it or not, strong female role models played a part in our career journeys and we have particularly noticed it when they are not there, i.e. not seeing women in leadership roles makes us question whether we belong there, or whether we have to work harder to get there.” 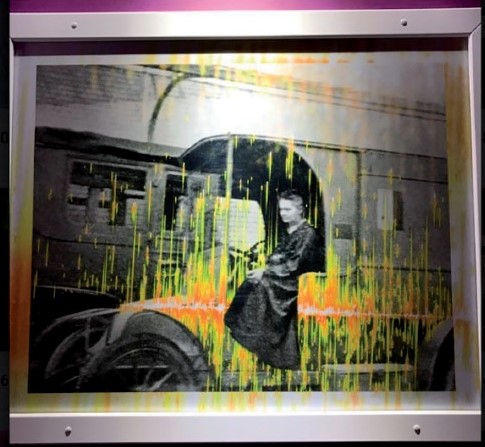 (Picture of Marie Curie at the French Pavilion. She was not named in the description. Photo: Anna CohenMiller, et al.)

On the ground situation

Tina Spiessmacher, the co-founder of Leasing for Good – a German tech startup focused on sustainable consumption, shared her concerns about the findings of the study and spoke about her on-the-ground experience of gender-biased attitudes that are prevalent in STEM fields.

“The way the workplace, professions, and society at large are portrayed in media and imagery matters a lot. I see social media posts on tech pages with comments saying: “congrats, you have an all-men panel.” I find it funny but also sad because people have normalised such notions,” she said. “Even worse, I’ve often heard excuses by tech companies which say that they did not find any female experts to hire.”

"I also think that establishing gender-neutral language or unconscious-bias training is important if we want to overcome cultural and structural hurdles.”

Stressing on the need for a balanced representation of women in STEM fields, she said there should be equal opportunities for all, especially in fields that have as big of an impact on society and the planet as the tech sector.

“We cannot except that women or other social groups are systematically underrepresented in an area, such as tech, that is so important for our future,” she said. “This underrepresentation also means that problems and challenges that are unique to certain groups of our society are not perceived to be as relevant. They are tackled less decisively, and possible solutions do not receive the same funding.”

Elaborating her point, she stated that the Femtech industry is still underfunded as it accounts only for a fraction of the aggregated capital that flows into healthcare, but it affects half of the population. 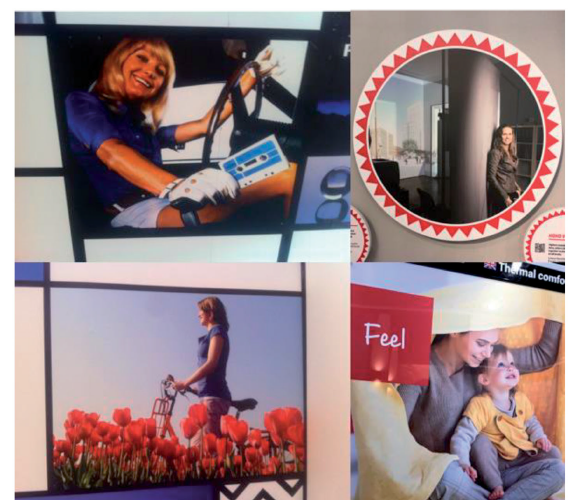 Considering that only 16 per cent of company founders in Germany are female, Spiessmacher said there are several reasons why women are underrepresented in the tech industry.

“[Women often face hurdles, such as] access to investment and strong networks, traditional family models, limited childcare facilities, and a lack of role models, among many others,” she said.

Referring to funding data released by Female Founders Monitor 2020, she said that in Germany, only five per cent of female-led startups raised more than one million euros, while the percentage was around 28 per cent for male teams.

"Knowing that raising money would be so much harder than my male counterparts was a strong reason for thinking twice before starting a tech-startup," she said. “If you know the numbers, it is hard to say to yourself “it will be fine.” Therefore, I believe there is an unconscious bias among venture capital firms leading to real barriers for female founders. We need to address all of the problems mentioned above if we like to see any change."

She concluded: "And yes, I would agree that the tech-startup world is owned by men.”