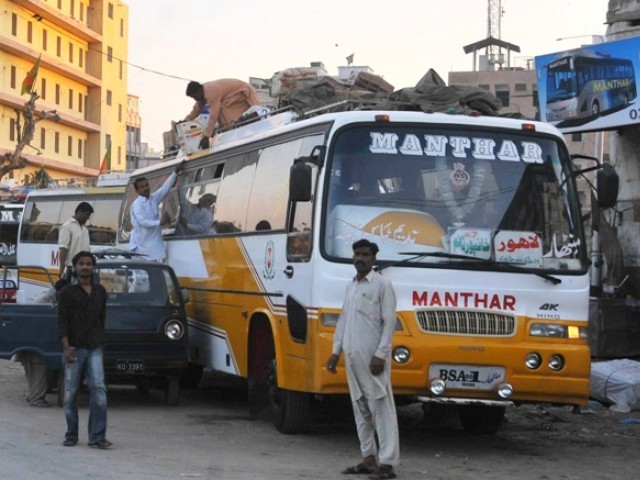 The Sindh High Court (SHC) ordered on Wednesday the combining of all pleas seeking the restoration of inter-provincial transport services and bus terminals, further directing the parties to ensure their presence at the next hearing.

The two-member bench, comprising Justice Muhammad Ali Mazhar and Justice Yousuf Ali Sayeed, asked the provincial transport department's counsel whether the inter-province passenger buses had started functioning again after the lockdown-induced hiatus, to which he responded in the affirmative.

"Why aren't the authorities permitting the bus services to function even after the lockdown has been lifted? How many terminals are operational?" inquired the court.

At this, the transport department's lawyer informed the court that 250 bus terminals had previously been functional but only three were currently operational.

The transporters' counsel claimed that these three bus terminals were also occupied by a 'mafia,' moving the court to allow their private bus terminals to function.

Another group of transporters also filed a plea seeking the restoration of transport services with the adoption of standard operating procedures (SOPs).

The court ordered the combining of all pleas seeking the restoration of inter-provincial transport services and bus terminals and ordered the parties, including the Sindh transport secretary, to ensure their presence on the next hearing.

The bench also directed the petitioner's counsel to submit a counter-reply in response to the reply submitted by the Sindh government and the Legal AIG.

The court was hearing a plea seeking legislation to award strict punishment to those accused of raping women, as the Sindh government and the Legal AIG submitted their reports.

The petitioner's counsel maintained that the fee for DNA testing was not to be submitted immediately in rape cases.

He added that the Supreme Court had issued orders for devising modern mechanisms of investigation for rape cases, as well as amendments in the laws pertaining to the trials and prosecution of the accused.

The counsel further claimed that those accused of rape were usually easily acquitted due to the absence of strict legislation.

Justice Mazhar remarked that the court would decide what was to be done after reviewing the submitted SOPs.

The court directed the petitioner's counsel to submit a counter-reply for the reports submitted by the provincial government and police.

Quota for the differently-abled

Separately, the SHC directed the Sindh chief secretary and the head of the relevant institution to appear in court in a personal capacity at the next hearing of a plea challenging appointments on the government jobs quota reserved for differently-abled individuals.

Advocate Shuaun Nabi informed the court that the Sindh government was not giving jobs to visually impaired persons as per the law, while non-differently-abled people were being appointed on the five per cent quota reserved for differently-abled persons.

He claimed that such appointments were illegal and a violation of judicial orders passed in 2018.

Adjourning the hearing, the court directed the Sindh chief secretary and the relevant institution's head to appear before the court in personal capacity at the next hearing.