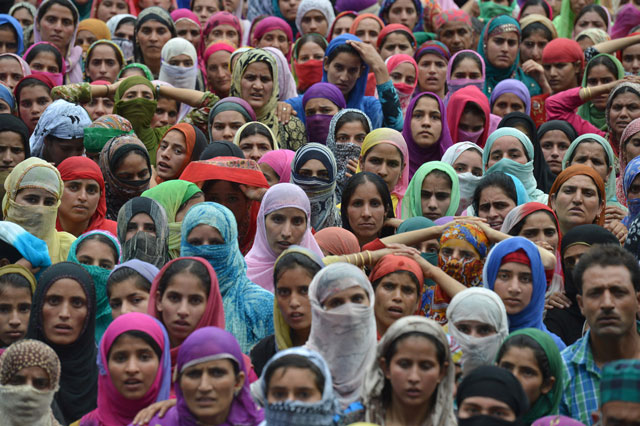 Kashmiri mourners look on during the funeral of four civilians at Aripanthan Magam village in Budgam district on the outskirts of Srinagar on August 16, 2016. PHOTO: AFP
LAHORE:

The military siege has been imposed on some ten million Kashmiris in Indian Illegal Occupied Jammu and Kashmir (IIOJK) since August 5, 2019 and the suppressed Kashmiris continued to face gross human rights violations at the hands of more than 700,000 Indian forces deployed in the valley.

The women of IIOJK have been faced with an unending ordeal of terror and trauma due to frequent abductions, sexual violence, illegal detentions and molestations at the hands of Indian security forces on the pretext of ‘Cordon and Search Operations’. The Modi’s Hindutva supremacist government continues to use rape and molestation as a ‘weapon of war’ and ‘collective punishment’ in the occupied territory to suppress the legitimate right to freedom of the innocent Kashmiri people. It is a sheer violation of the international humanitarian and human rights law and UN Security Council’s resolutions. The horrific acts of violence, mental torture, aggressions and ruthless brutalities against women had turned life into a worse nightmare in the valley.

According to local human rights watch group, known as the Committee of Concerned Scientists, the IIOJK is one of the most policed and militarised areas. The group underlined the two main scenarios during which the Kashmiri women were subjected to rape by the Indian forces, either during search operations or during reprisal attacks after military ambushes.

The act of rape is deplorable while its trauma destroys the soul of victims forever. Therefore, the world must take immediate notice of the barbaric actions of the Indian security forces to safeguard the dignity of women in the disputed territory. Since 1947, the bodies of innocent Kashmiri women have been turned into battlegrounds in the heavily militarised area of disputed territory by the Indian forces.

According to the Human Rights Watch, Armed Forces Special Powers Act (AFSPA) "allows any soldiers or officer to fire upon groups of five or more people or anyone suspected of having weapons, arrest anyone without a warrant, and conduct home invasions."

This act shields the Indian security forces from prosecution from their crimes of sexual violence. The draconian nature of the act has been described as breach of the international human rights law by members of the international community. After the horrific episode of mass rape of Kashmiri women in Kunan, Poshpura villages on February 23, 1991, rape was systematically and frequently used by the security forces to terrorise the entire population of the disputed valley. Afterwards, the abrogation of Article 370, an increasing trend of rape was recorded in remote and poor villages of the occupied territory by the Human Rights Watch.

According to the report titled 'Kashmir Caged: A Fact-Finding Report, "Hundreds of boys and teens are being picked up from their beds in the midnight raids. The purpose of these raids is to create fear. Women and girls told us of molestation by armed forces during these raids." However, such cases were under reported due to social stigma and imposed restrictions in the valley.

India’s resort to sexual violence in the IIOJK has been documented by the two reports of the UN Office of the High Commissioner for Human Rights (OHCHR) and global media and society organisations. But lack of accountability of perpetrators and absence of justice for victims of rape in the region continue to define the deliberate disregard of India for rule of law and human rights. The International Humanitarian, Human Rights Law and UN Security Council's resolutions are being violated in the territory.

The world must wake up from deep slumber to contain sexual violence being used as war tactics in the occupied territory. Talking to APP, Mushaal Malick, human rights activist and wife of Chairman Jammu and Kashmir Liberation Front, Yasin Malick said, "Women and children as the vulnerable segments of society were suffering the most in the IIOJK due to rape, torture and mental trauma." She said the valley had numerous victims of rape and the highest ratio of widows which were under reported. The human rights activist said that men folk were not getting job opportunities in the occupied territory, therefore, due socioeconomic pressure; women have to struggle to go outside for jobs. She, however, said that women were harassed, followed, stared, abused and tortured who were working for their livelihood. Brutal force was being used against the unarmed civilians in the valley, she added.

President, Centre for Pakistan and Gulf Studies (CPGS) Senator Sehar Kamran while talking to APP said that India was imposing worst restrictions to suppress the voice of people in Indian Illegal Occupied Jammu and Kashmir (IIOJK) by making hostages the Kashmiri people and kidnapping their women and girls. Sehar Kamran said during the last three decades, more than 11,000 women have been victims of humiliation, rape or gang-rape at the hands of Indian occupation forces in Indian Illegal Occupied Jammu and Kashmir, adding Pakistan reaffirms complete solidarity with these Kashmiri women and their families. She said there were over a billion and a quarter people living in the subcontinent who had been held hostage to the issue of Kashmir and being tortured to death, adding that physical torture on Kashmiri women was rapidly increasing, which had no future. The military siege had been imposed on some ten million Kashmiris in IIOJK and the suppressed Kashmiris continued to face gross human rights violations at the hands of more than 700,000 Indian forces deployed in the valley, she said.

Dr Maria Sultan, President and Chairperson, South Asian Strategic Stability Institute (SASSI) University while talking to this agency said that the legal paradigms of IIOJK were entirely changed due to the abrogation of Article 370 on August 5 last year while people outside the occupied territory were not aware about the gravity of the situation. She said that Kashmiri women had turned stateless, human-less and selfless after the new act passed by the Indian legislators regarding the disputed territory.

Mushaal Malick said, "The jungle law was imposed in the IIOJK as the new law is nothing but a death warrant for Kashmiri people." She said the COVID-19 has diverted the attention of the global community from the ongoing violence. Maria Sultan said, "Women of IIOJK were legally dis-empowered as they have lost their identity and security while they were neither represented nor their issues were reported." Therefore, targeting young girls in the occupied territory had become very easy for the occupation forces and Indian citizens, she added. Mushaal Malick said that large scale genocide was carried out in the occupied territory, adding that giving citizenship to thirty thousand Indians and constructing two hundred thousand houses for them was an effort of the Indian government to convert majority of Muslims into minority in the valley.

Human Rights Commission of Pakistan (HRCP) activist Tahira Habib while talking to APP condemned the Indian military brutalities which were making the future of a large number of Kashmiri women and young girls bleak.She said that abduction and molestation of young women during so-called cordon-and-search operations have been used as a tool by Indian forces to punish entire communities.

Meanwhile, two leading HR bodies of IOK, including Association of Parents of Disappeared Persons (APDP) and Jammu and Kashmir Coalition of Civil Society (JKCCS) had issued a 560-page report in which torture methods on women, girls, children and minors and others had been highlighted in detail. The techniques of torture on Kashmiri women and youth included solitary confinement, sleep deprivation, sexual torture including rape and sodomy, which were being used as torture techniques against their Independence movement, the report said.

Bonded Labour Liberation Front general secretary and Human Rights (HR) activist Syeda Ghulam Fatima told APP that world human rights bodies, the UN Secretary General's Special Representative on Sexual Violence in Conflict, must take cognizance of Indian forces' crimes in IIOJK. She said the UN to hold Indian forces to account who 'abet and partake' in acts of sexual violence against Kashmiri women in Indian Illegal Occupied Jammu and Kashmir. She said the world must wake up to these war tactics in IIOJK in violation of international humanitarian and human rights law as well as applicable UN Security Council resolutions.

According to a report released by the Kashmir Media Service, thousands of women are among 95,507 Kashmiris, martyred by Indian military, paramilitary and police personnel since January 1988 till date. At least 671 women have been martyred by Indian troops since January 2001 till date, it said. The report revealed the unabated Indian state terrorism rendered 22,912 women widowed. The Indian forces' personnel molested 11,179 women including the victims of twin villages of Kunan and Poshpora mass rape and Shopian double-rape-and murder case of 17-year-old Aasiya Jan.