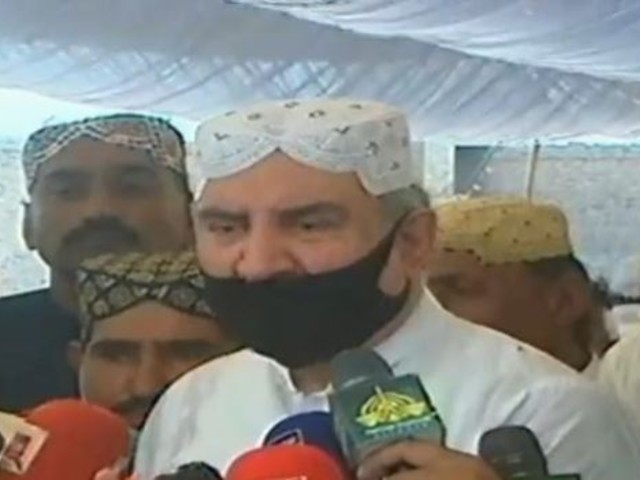 Foreign Minister Shah Mahmood Qureshi on Saturday called on all political parties to join hands with the government to observe Youm-e-Istehsal on August 5, marking the first anniversary of India’s illegal action of scrapping the special constitutional status of IIOJ&K.

The whole nation should unanimously raise voice against the military siege imposed by New Delhi in the Indian Illegally Occupied Jammu and Kashmir a year ago after revocation of its special status and convey a message to the Kashmiris that they were not alone in their struggle for the right to self-determination, he said while talking to journalists here after offering Eidul Azha prayer.

“On the day (August 5, 2019), the IIOJ&K’s flag was downed, the Kashmiris were put behind bars, and perhaps today no Eid prayer congregation was held in Srinagar,” he said.

The Kashmiri people had been facing immense difficulties, pain and persecution under the continued military siege for the last one year, he added.

The foreign minister said he himself would visit the Line of Control (LoC) on August 3 to deliver a message that the Pakistani nation stood with the Kashmiri brethren in their just struggle for right to self-determination.

Prime Minister Imran Khan, he said, would address the Legislative Assembly of Azad Jammu and Kashmir on August 5 to further highlight the Kashmiri people’s struggle for freedom and their sufferings at the hands of Indian occupation forces. Similarly, he said President Dr Arif Alvi would lead a rally on the day while all the chief ministers would speak to their respective legislature assemblies to condemn Indian brutalities on the people of held valley.

Qureshi said the whole world, including the Muslim Ummah, was condemning the Modi-led Bharatiya Janata Party (BJP) government’s move for laying the foundation of a temple at the place of Babri Mosque.

Commenting on creation of South Punjab province, the minister said initially two secretariats would be established in Multan and Bahawalpur in this connection. He had also arranged a meeting of the region’s parliamentarians with the prime minister to present their point of view about the said move, he added.

The foreign minister said two secretaries would be deputed at the secretariats and no file would move to Lahore for a decision. The Punjab chief minister had already altered rules of business in that regard. “It is a big achievement and a step forward towards the creation of South Punjab province.”

Referring to the PM’s package for the construction industry, Qureshi said 13 top builders of the country had decided to invest Rs1.3 trillion in the housing sector, which would boost its attached industries like steel, cement, bricks etc, and also strengthen the national economy.

He said Eidul Azha carries the great message of sacrifice. “This year’s Eid is different from the past ones as it is being celebrated amid the coronavirus pandemic. For the first time the number of Hajj pilgrims has been reduced remarkably in order to save them from the pandemic,” he added.

He appealed to the masses to follow precautionary measures while observing Eid rituals.

The number of coronavirus patients had decreased due to the government’s smart lockdown policy, he said, appealing to the nation to continue pursuing the standard operating procedures during the month of Muharram.