Known for its strawberries, Lepe in southern Spain supplies a large part of the European market 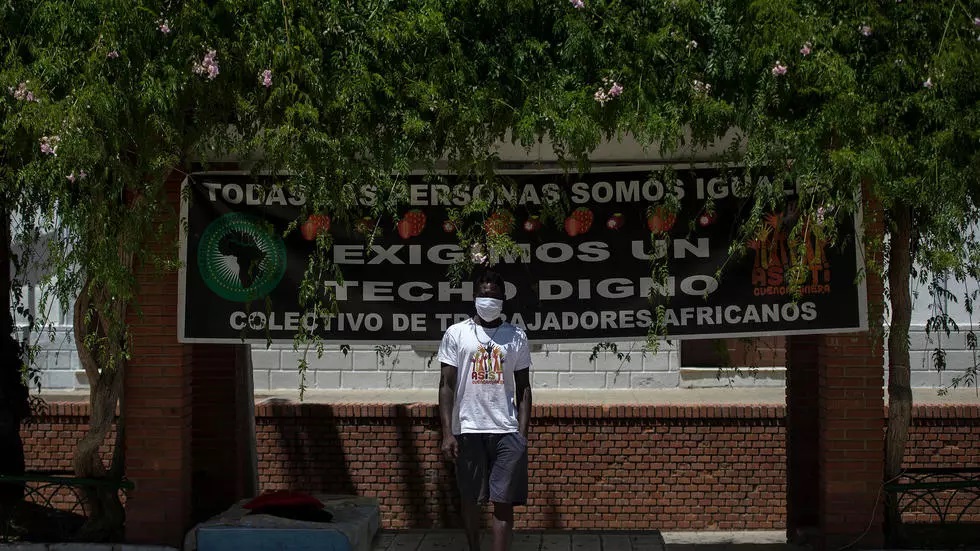 Seasonal workers have been left on their own in southern Spain after their shantytowns burnt down and coronavirus cases surged once again. PHOTO: AFP
SPAIN:

Lamine Diakite has been on the street for two weeks since the Spanish shantytown he was staying in burnt down, one of hundreds of fruit pickers abandoned as coronavirus cases soar.

To protest at their situation, he and dozens of other African workers have taken their mattresses and are sleeping in a square outside the town hall in Lepe, near the Portuguese border.

"Our huts have been burnt down leaving more than 200 of us in the street," said Diakite, a 32-year-old Malian.

"And during the pandemic, that's a risk for us and for the rest of the population."

Known for its strawberries, Lepe in southern Spain supplies a large part of the European market.

Here, as in other agricultural areas, workers live in basic shelters without light or running water, cobbled together from wooden pallets, plastic sheeting and mattresses, spaces they trade among themselves for around 250 euros ($300).

Despite the unsanitary conditions and impossibility of observing social distancing, no coronavirus tests have been carried out in the camps, the migrants and Lepe officials say.

Even so, many have gone on to work in other areas of Spain, such as Lerida in the north east where regional authorities reimposed a two-week lockdown in July after the emergence of a new outbreak linked to seasonal workers.

"It's very likely there will continue to be outbreaks linked to seasonal workers," the health ministry's emergencies coordinator Fernando Simon warned this week.

At the moment, only the northern region of La Rioja has taken drastic measures, pledging to test all seasonal workers whether they have a contract or not.

In mid-July, three shantytowns went up in flames around Lepe in a string of fires that began just after the picking season for strawberries, raspberries and blueberries ended.

"It was a crazy night," recalls Ismaila Fall, a 30-year-old Senegalese man who tried to put out the blaze with water and sand and suspects it was deliberate.

But when it comes to finding a solution, neither the state nor local authorities are willing to take responsibility.

"(These migrants) are the government's problem, not the town hall's, we can't regularise their situation," insisted Manuel Mora, mayor of Lucena del Puerto, where another camp burned down.

"Before the harvest, they should have a PCR test but that costs the farmer a lot of money, so the government should help" by providing them, said Juan Jose Alvarez Alcalde, who heads the ASAJA farmworkers union.

There have been makeshift encampments in the Lepe area going back to 1980s, with the UN's expert on poverty and human rights Olivier De Schutter calling on local authorities to urgently "end the situation of degradation in which seasonal agricultural workers live".

The town hall had suggested the army set up a field camp on a plot of industrial land, but the military rejected because of the extreme summer heat, a government source told AFP.

"We need a network of lodgings in all agricultural communities" in the area, concluded Jesus Toronjo, deputy head of the Lepe town council.

He added that it was looking at a ranch owned by the municipality with space for 800 people.

Any solution would require cooperation between local authorities with support from the regional or central government, but that does not look likely given a proliferation of local power struggles.

"Everyone is just passing the buck," explained Antonio Abad who heads an NGO called ASISTI that helps migrants.

"The problem is the lack of political will" with an immigrant population that "doesn't take part in polls."