'I have immense faith in God and the judiciary,' the actor shared 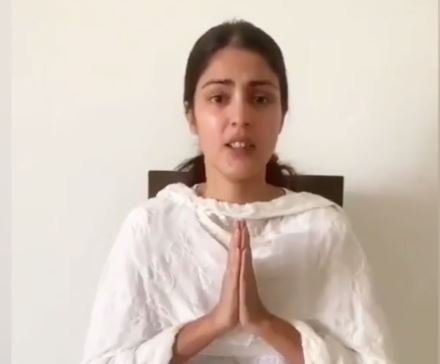 In a video doing the rounds of social media, Bollywood actor Rhea Chakraborty is seen addressing the allegations against over the death of her boyfriend, actor Sushant Singh Rajput. “I have immense faith in God and the judiciary. I believe that I will get justice,” said an emotional Rhea in the video.

“Even though a lot of horrible things have been said about me in the electronic media, I will refrain from commenting on the advice of my lawyer as the matter is sub judice,” she added.

“Satyamev Jayate. The truth shall prevail,” the actor concluded in the video, which is available on the official Instagram handle of celebrity photographer Viral Bhayani.

Earlier this week, Sushant’s suicide case took a dramatic turn after it came to light that the late actor’s father KK Singh has filed an FIR in Patna accusing six people, including Rhea, for abetment to suicide. She had received widespread flak ever since.

Sushant and Rhea were in a relationship before the actor’s alleged suicide on June 14. Sushant’s father has levelled several allegations against Rhea, including syphoning money from his son’s account and also threatening to disclose his medical reports to the media if he carried out his plan of quitting acting and taking up farming in Coorg. Sushant’s kin has also accused Rhea of keeping him away from his family.

Rhea, who on Wednesday had moved the Supreme Court seeking transfer of the investigation to Mumbai, told the apex court that she also received many death and rape threats and that she is in deep trauma due to the loss of Sushant, which has multiplied further due to the constant media glare the case has been receiving.

Rhea informed the top court that she was in a live-in relationship with Sushant till June 8. She claimed that Sushant was suffering from depression for some time and was on anti-depressants.

"In peculiar facts and circumstances of the present case, the petitioner has been falsely implicated in the present case filed by at the instance of Krishna Kishore Singh," Rhea said in her plea. "He committed suicide on the morning of June 14 at his Bandra residence by hanging himself. The petitioner was summoned and she had visited the Bandra police station on various occasions and her statement was recorded under Section 175 of CrPC.

"The petitioner has filed a complaint at Santa Cruz police station in Mumbai against the death and rape threats. It would be just and expedient if the transfer of the case is directed from Patna to Mumbai," the plea said.

Speaking to IANS earlier, Rhea's lawyer Satish Maneshinde had said that his client has electronically filed a petition in the Supreme Court, seeking transfer of investigation from Patna to Mumbai where the investigation in connection to the actor's death was already in progress.