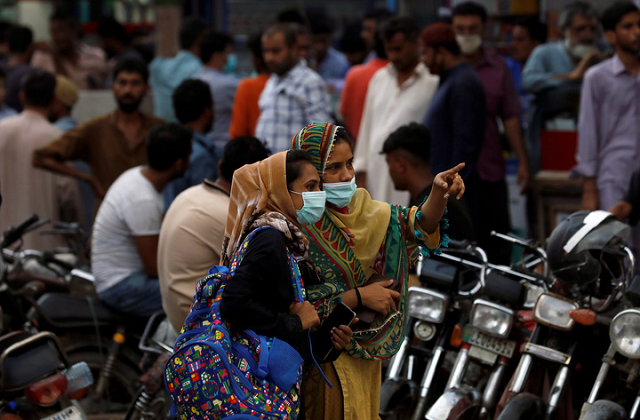 With 903 new cases reported over the past 24 hours, the total number of infections to date reached 278,305, with 1,146 of them currently in critical condition, according to Health Ministry data.

This is the lowest daily figure since May 14 when the country reported only 490 confirmed cases.

Following a gradual decline in the number of fatalities, some 27 patients died due to the deadly virus across the country, raising the death toll to 5,951. Over 88% of patients, or 247,171, have recovered so far.

According to the ministry, Over 1.97 million tests have been conducted so far, with 20,507 more samples tested over the past 24 hours.

On Monday, the government announced strict restrictions to contain the virus’ spread during the Muslim Eidul Azha holiday.

Authorities have imposed locality-based lockdowns in virus hotspots across 20 cities since June, and many officials, including Prime Minister Imran Khan, have credited this strategy for the country’s improving numbers.

“The world is widely acknowledging our smart lockdown strategy as our cases are gradually declining,” PM Imran told a media briefing on Monday.

However, he urged the public to continue following preventive measures during Eidul Azha and Muharram, warning that Covid-19 cases may increase if SOPs are not followed.

“We have to be careful in Eid and Muharram as coronavirus cases could increase if we are not careful.”

The premier also urged the nation to buy sacrificial animals online and if need be, go to the cattle market while adhering to the preventive SOPs.

“If we are successful in these two months, then we would be able to open other sectors such as tourism and education,” he said. “If were are not careful, then we would be putting the lives of our loved ones especially the elderly in danger.”

With input from News Desk