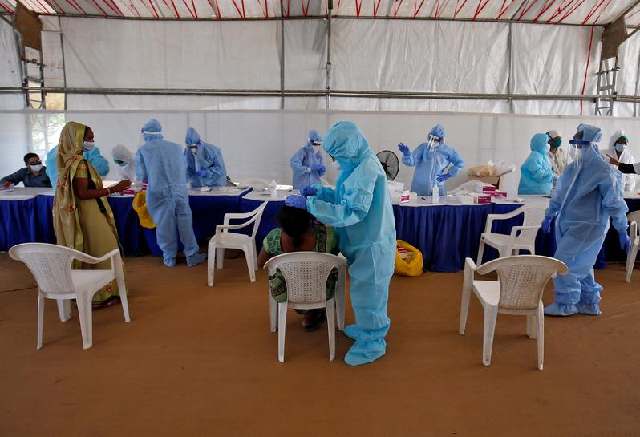 A healthcare worker wearing protective gear takes a swab from a woman for a rapid antigen test, amidst the coronavirus disease outbreak, at a check-up point in Ahmedabad, India. PHOTO: REUTERS/FILE
NEW DELHI:

India is seeing the emergence of new virus hotspots as cases decline in the major cities of Mumbai and Delhi.

According to data from the Indian Health Ministry, a rise in cases was reported in the states of Andhra Pradesh, Bihar, Karnataka, Uttar Pradesh, and Tamil Nadu.

“Areas like Delhi and Mumbai have managed to gradually bring the curve down. But now we’re seeing new areas and states adding to the tally,” Dr. Digambar Behera, a renowned pulmonologist in North India, told Anadolu Agency.

“I guess it’s bound to happen because the cases continue to spread in the community.”

Officials warned the public not to let their guard down even when cases are falling and they continue social distancing and wearing masks.

“Cases are coming up in new and rural areas because the disease is spreading further,” Dr. Kapil Yadav of the Centre for Community Medicine in New Delhi-based All India Institute of Medical Sciences told Anadolu Agency.

“In Delhi, the positive rate is around 30% and from Mumbai (Dharavai) we’re seeing 50%. Definitely cases would decline because the susceptible population is very less now. It is a normal trend.”

Cases up in populous states

What is worrying now is that infections are going up in places like India's most populous state Uttar Pradesh and neighbouring Bihar. Officials say they have stepped up testing.

“Earlier, the number was less and now every day we are seeing approximately 1,500-2,000 new cases a day. The reason for the rise is because we have increased the testing through which we are able to detect more cases,” Dr. D.S. Negi, director general of Medical Health in Uttar Pradesh, told Anadolu Agency.

In Bihar, officials also say the number has increased. “Yes there is an increase in the cases. But I think the reason is because we are doing 16,000 tests per day. When the number of testing is more, the cases also increase,” Dr. Naveen Chandra Prasad, director of Disease Control in the provincial health department, told Anadolu Agency.

But Dr. Shahid Jameel, virologist and CEO of the Wellcome Trust, argued that cases in these states have increased due to migration.

“It’s a no-brainer that cases would increase in villages and small towns of Bihar, Uttar Pradesh, Jharkhand, etc. as people migrated from Delhi, Mumbai, etc. after losing jobs. Now that we have increased testing in those areas, we are finding more and more. The Bihar numbers show a 10% daily increase; the national average is about 3-4%,” he said.

He said testing is a strategy to detect more cases. “Test, trace contacts of positives, and isolate. The point is that you won’t know if you don't test at a high enough density. Testing has to move to small towns and rural areas. That’s the only way to know,” added Jameel.

With a record number of 55,079 cases, India on Friday crossed the 1.6 million mark, along with 779 deaths in the last 24 hours, the Health Ministry said.

The ministry also said that India "achieved another landmark" with more than 600,000 Covid-19 tests done in the last 24 hours.