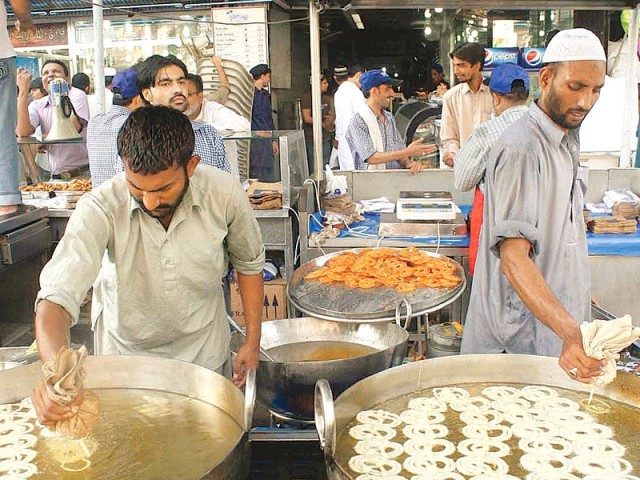 First documented in the 13th century, jalebis travelled to the subcontinent during the Mughal era. PHOTOS: AGENCIES

Jalebi, a mouth-watering delight, is a frequent item on the iftar menu during Ramazan. Though many think it’s a Pakistan-centric sweetmeat, its origin dates back beyond the Mughal era and goes beyond the boundaries of the subcontinent.

Going back in time, in Iran, zulubiya — one of the earliest forms of jalebi — was prepared on special occasions to be distributed among the poor. But it was first documented in Muhammad bin Hasan Al-Baghdadi’s cookbook during the 13th century. Usually called Al-Baghdadi, he is known for compiling an Arab cookbook of the Abbasid period called Kitabal Tabikh (The Book of Dishes). From Iran to the subcontinent, jalebi travelled during the Mughal era most probably through trade, culture and political journeys, according to The Times of India.

Muhammad Saleem, co-owner of sweetmeat shop Rehmat-e-Shereen, says: “In the subcontinent, this sweetmeat came from New Delhi in the olden times. Its history goes back to the times of Mirza Ghalib.”

Saleem narrates a legend about Mirza Ghalib eating sweetmeats during the festival of Diwali. When asked why he was having jalebi, the poet replied: “Why can’t one have jalebi? Are they too Hindu or Muslim that I can’t associate with them? And how will the ladoo be categorised?”

Explaining the locations specialising in sweetmeats in general, Saleem says: “There were four places in India that were best known for making sweetmeats: New Delhi, Agra, Bengal and Badaun. Jalebi came from New Delhi.”

“As far as Karachi is concerned, the hub of jalebis used to be Burns Road, but that is not the case anymore. Every locality, every nook and corner of the city now has a jalebi-wala. It is not a feast associated merely with Ramazan; in fact, it is sold throughout the year,” adds Saleem.

Explaining the cultural significance of jalebis Saleem says: “In the Punjabi culture, jalebi is something really big. Sikhs, even if they are residing in England, do not wed their young ones without offering jalebis. It is more like a customary sweetmeat.”

Considering the increasing health concerns, many sweet shops have introduced diabetic sweetmeats. However, jalebi in Pakistan remains close to its traditional form. “I have been making jalebis for quite some time now and as far as I know, there is no such thing as diabetic jalebis in town. I don’t know of any place offering sugar-free jalebi,” said Amin, a jalebi-maker at Qasre Shireen located in Gulshane Iqbal.

When asked about various types of jalebi, he said: “If you are considering jalebi and imertis as part of one family, you are mistaken. Jalebi is made from a mixture of flour, water and sugar. Imertis on the other hand, are made of moong lentils. There aren’t different types of jalebi; then is only one type that is dominant throughout Pakistan.”