More than 283,104 homes and businesses were without electricity by mid-morning Sunday 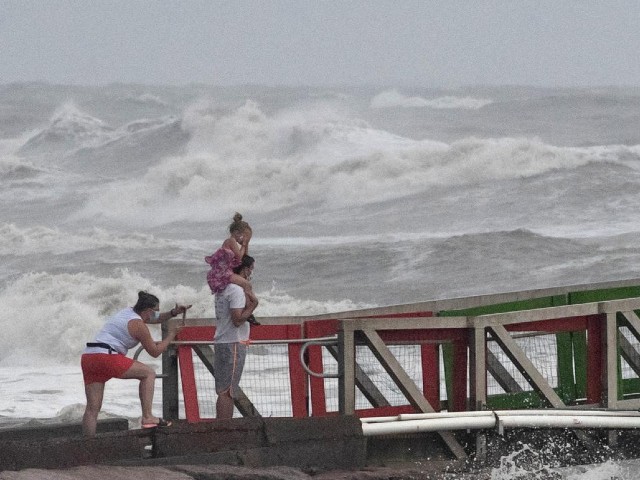 A girl covers her face from strong winds as her family members watch high swells from Hurricane Hanna from a jetty in Galveston, Texas, US, July 25, 2020. PHOTO: REUTERS/FILE
HOUSTON:

Hurricane Hanna’s winds lashed the south Texas coast early Sunday, knocking out power to thousands before it was downgraded to a tropical storm that still threatened flash flooding in the area already badly hit by Covid-19 infections.

Hanna came ashore on Padre Island on Saturday afternoon as a Category 1 hurricane on the five-step Saffir-Simpson scale, and later made a second landfall in Kenedy County, Texas.

More than 283,104 homes and businesses were without electricity by mid-morning Sunday, according to poweroutage.us. But some locals took advantage of the wild weather, with Alejandero Carcano, 16, and Jesse Garewal, 18, both residents of Galveston, surfing the high swells whipped up by Hanna.

Weakening as it headed west over land, Hanna was a tropical storm by Sunday morning, with its centre about 40 miles (65 km) from McAllen, Texas and about 65 miles (105 km) from Monterrey, Mexico, the US National Hurricane Centre (NHC) said.

It was forecast to lose more steam as it moved across Texas and northeastern Mexico, and on Sunday weather watch officials cancelled the storm surge warning they had issued for the Texas coast.

“7 AM Radar update - Showers with heavy rain were developing from Victoria extending SE into the Gulf of Mexico, moving NW. Expect this trend to continue through mid morning,” the National Weather Service Corpus Christi office said on Twitter.

Hanna still posed a threat, the hurricane centre said, noting it could dump upward of 18 inches (45 cm) of rain in the area through Monday.

Texas Governor Greg Abbott said on Saturday that the storm was especially challenging as it was sweeping through an area of the state that has been the worst hit by the coronavirus.

The Texas area struck by Hanna has struggled to contain outbreaks of Covid-19 in recent weeks. Cases along the state’s coast have soared into the tens of thousands.

More than 400 people in Corpus Christi were hospitalised with the illness on Friday, according to city data.

The storm was not expected to affect offshore oil and gas production. Energy companies have not evacuated workers or shut down production from their Gulf of Mexico platforms because of Hanna.