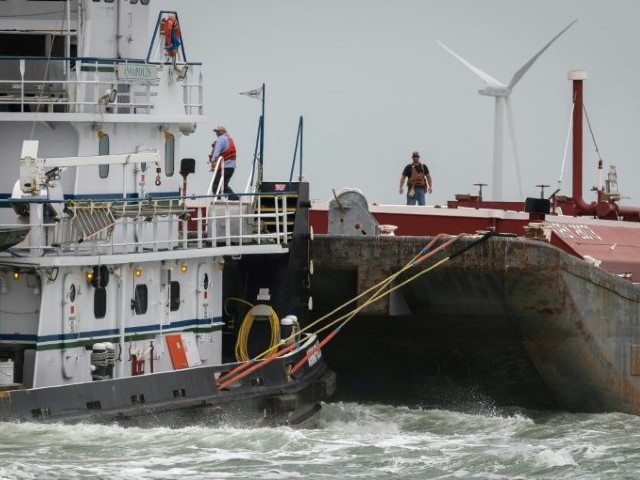 Men work atop a vessel in the Corpus Christi Ship Channel on March 11, 2019; the Texas city is bracing for the first Atlantic hurricane of 2020, Hanna, to make landfall on Saturday. PHOTO: AFP
HOUSTON:

Texas, already struggling with a surge in coronavirus cases, was bracing Saturday after storm Hanna strengthened into the first Atlantic hurricane of 2020, with meteorologists warning of heavy rain, storm surge and potentially life-threatening flash flooding.

The storm, with wind speeds of around 80 miles per hour (130 kilometres per hour), strengthened to a Category 1 hurricane overnight and is expected to make landfall by afternoon or early evening, the National Hurricane Centre (NHC) said.

It could bring storm surges of up to five feet and drop up to 18 inches of rain on parts of south Texas, the NHC said, warning of dangerous flash flooding.

Hanna was about 85 miles southeast of Corpus Christi, Texas, at 10:00 am local time (1500 GMT), and was moving west at about seven miles per hour, an NHC advisory said.

Expected to make a slight turn later in the day, it "should make landfall along the Texas coast within the hurricane warning area this afternoon or early this evening," the advisory continued.

Storm warnings were already in effect along Texas's Gulf Coast early Saturday. In Corpus Christi, a city of 325,000, officials closed libraries and museums as residents braced for the storm, local media reported.

Hanna will roar ashore as Texas is already facing a huge surge in coronavirus infections, with officials instituting a state-wide mask mandate to try to curb the spread of the disease.

Two other storm systems were churning Saturday: Pacific Hurricane Douglas, bearing down on the Hawaiian islands, and Tropical Storm Gonzalo in the Atlantic, near the Windward Islands.

Douglas -- at one point a powerful Category 4 hurricane -- has weakened to a Category 2 storm with wind speeds of 105 miles per hour.

The NHC said Saturday the storm would continue to weaken as it approaches Hawaii, "potentially passing dangerously close to, or over, the islands late tonight through Sunday night," bringing high winds and heavy surf.

Hurricane warnings were in effect Saturday in Hawaii and Maui counties as well as Oahu.

Meanwhile, Gonzalo was pouring heavy rain on the Windward Islands, but the tropical storm was expected to weaken and dissipate by Sunday night.