The virus and us

If even developed countries were baffled by the pandemic, perhaps a new education plan is needed 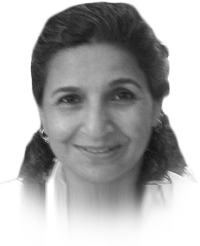 The writer has a PhD in Education, Leadership, and Organisation and an emphasis in Applied Linguistics from the University of California. She directs the Sindh Abhyas Academy at SZABIST and can be reached on email at [email protected]

Colonialism as a phenomenon and epidemiology as a science were, until recently, the purview of academics. Journalists dabbled in these ideas from some distance, more as social commentators and less as experts. With statues coming down and viruses running rampant, everyone is an ‘expert’ on these real live events because everyone has a stake. We humans are deeply affected by both; institutional colonialism and the killer virus ruin us, one slowly and the other immediately.

However, the deeper implications of both are barely understood by most. We do not understand the meaning of anything deeply enough, timely enough, to protect ourselves. Perhaps it is to do with semantics. Most of our Pakistani languages are not precise enough to differentiate between an epidemic, an endemic, and a pandemic. Even if there are differential words, in Sindhi and Urdu, most people use wabah for both epidemic and pandemic. And if we cannot make this simple distinction in native words, could it be because our languages have not been subjected to scientific lenses?

Recently the Federal Minister for Climate Change was heard (in Urdu) on national television, referring to the global health crisis. She said that it is a flu and Covid-19 refers to its 19 points which can be applied to any country in any way, and that it is up to individual countries to develop their own immunity.

Is it language or science itself that we do not understand? Fiascos around public health crises have been whirling around the globe as governments first deny then discover that epidemiology can be a good predictor of impending disaster. Surprisingly though, some scientists accomplished in other fields, believe that epidemiology and virology are not exact sciences. If that were the case, how come mankind has developed vaccines against diseases like tuberculosis and polio?

Others in powerful positions that require above average acumen have said, “There is no pandemic in Pakistan”. They seem unaware of the reverse oxymoronic interpretation of this statement. Not to put too fine a point on it: if a thing is pandemic, it follows that it is ubiquitous and global. It must be said for once and for all, a pandemic is always universal.

From 1971 to 1974, BSc students of Microbiology, (including myself), at the Institute of Microbiology, Karachi University, were taught about microbes, each having their own chapters in the textbook too simply titled, Microbiology.

The authors, Pelczar and Reid, had arranged their concepts so that the chapter titled, “Corona Viruses” arrived later in the book. The instructor seemed to avoid a relevant discussion, apologising that not enough is known about the behaviour of these viruses. In 1978, after courses in Public Health and Epidemiology I took my first full course in Virology, in a university extension programme at Berkley. That instructor predicted that Corona Viruses “will be a problem for researchers in future because of their tendency to mutate.”

Some years earlier, when I had presented proof of my small-pox vaccination at a US airport, the official said it was not needed, “Smallpox has been eradicated from Pakistan but not from Bangladesh.” The Bangladeshi lady behind me looked as bewildered as I felt. She did not have a certificate and I could not give her mine. Not just its proof, but immunity itself remains untransferable and personal.

Scientific thinking in a population takes years to develop. The history of public health and hygiene in developed countries is backed by, in many European cases, over a hundred years of public schooling. Posters by responsible health authorities that everyone can read are essential. However, inculcating an obsession for hand washing, which is widely accepted as the main preventer of numerous diseases, makes sense in Pakistan, only after we ensure a nationwide availability of clean water and public toilets.

During the 70s signs in American university restrooms, public kitchens, etc., were slowly ‘going bilingual’. Even, during the 90s when the last ‘hold-out’ schools in California were forced to end bilingual education, public places continued to educate the public with signs about hygiene and hand washing in both Spanish and English.

In 2016, California voters overturned a 1998 law that curtailed bilingual instruction in the state's public schools. But public safety has been quietly trumping politics with pragmatics as bilingual posters and public service announcements are churned out. Unfortunately, the situation in America this time was beyond simple regimens like handwashing. The virus even had eminent string theorist Brian Green saying, “The health of democracy requires that every citizen has some familiarity with scientific ideas.”

The virulence of the virus and the necessity of social distancing clearly went up against most people’s health and hygiene grade level. Earlier in the pandemic one wondered how a public that denies and ridicules the existence of viruses can be protected? Grinning Lahoris and chuckling New Yorkers were heard on TV saying, “I have come to the city centre to find a corona. Show me one, and I will believe it exists!”

Long term planning between education and health ministries throughout Pakistan is needed to achieve any measurable success in communicating crucial information to the public regarding known methods of resisting and wiping out communicable diseases. A deep commitment through data driven serious research will reveal whether pictographs or words work best. Countries that can boast generations of victories over specific diseases need to be consulted. However, each site must have an approach that is specific to its needs. Years ago, children in one of Karachi’s slums were asked why no one had clean hands. Their answer was that they must always save water and only wash before eating.

Recent events have demonstrated that infectious diseases care little about politics, politicians, or man-made laws. Iceland’s Minister wisely left the entire coronavirus management issue to health experts who seem to have overcome the problem. This pandemic has demonstrated that presidents, prime ministers, health ministers, parliamentarians, and congress people need to be cognisant of the germ theory of disease.

Today, business as usual cannot go on without a mask. However, advertisements of masks sold in some areas of Karachi as well as one ‘sophisticated’ brand online, boast of their efficiency in preventing bacteria from entering the nose and mouth. Does it matter if the man on the street knows the difference between bacteria, viruses, fungi etc.? Yes, it does.

If even educated people and developed countries were baffled by the pandemic, perhaps a new education plan is needed for the whole world. We have seen that miniscule fragments of DNA and RNA can play havoc with entire economies. In Pakistan, neither our public education nor our societal norms lean toward a love for detail of any kind.

But ominous bacteria (resistant to the antibiotic of last resort) and lethal viruses will trump our casual attitudes every time. Let us not forget that every day, in Pakistan, people still die of ‘ordinary’ bacteria-caused diseases. Hopefully, the micron count in a droplet of a dispersed sneeze may someday become of keen interest to governments.