Politicians, rights organisations had demanded of govt to ensure his safe recovery 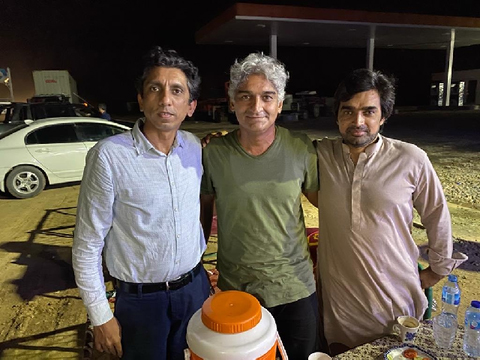 Senior journalist Matiullah Jan, who was allegedly abducted from the federal capital's Sector G-6 earlier in the day has been released late Tuesday, family sources confirmed. He was released near Fateh Jang, a small town in Punjab.

Jan, who is said to be in a stable condition, has left for his home with his brother Shahid Akbar.

A first information report (FIR) of the senior journalist's alleged abduction had been lodged at Aabpara Police Station by his brother.

Jan, speaking to a private news channel after his return, said that he was blindfolded and taken to an unknown location by his abductors. He said he was later released in Fateh Jang after being driven around the city.

Federal Minister for Science and Technology Fawad Chaudhry expressed his delight at the news. "Welcome back," he wrote on his official Twitter handle.

Delighted to hear this good news ... welcome back https://t.co/CyhLprY9xS

Earlier, the journalist's wife confirmed in an interview with a private publication that Jan's vehicle was found outside her school in Islamabad's G-6 area and added that she has been told by some people that he was forcibly taken away.

In a tweet, the Human Rights Commission of Pakistan demanded from the government to ensure the "safe recovery" of the journalist.

HRCP demands that the government immediately ensure the safe recovery of journalist @Matiullahjan919, whose family confirms that he has gone #missing.

We are extremely concerned for the fate and wellbeing of @matiullahjan919. He has been the subject of physical attacks and harassment for his journalism. The authorities must establish his whereabouts immediately. #ReleaseMatiullah

Police in the federal capital said they had started an investigation into the incident.

The journalist was to appear before the Supreme Court this week after the apex court took suo motu notice of an allegedly contemptuous tweet from his Twitter account.

Meanwhile, Information Minister Shibli Faraz has said that it was the government’s responsibility to safely recover the “abducted” journalist.

Addressing a news conference following the meeting of federal cabinet in Islamabad, Faraz said that he did not have complete details about the incident but assured the media that the government will make all out efforts to know Matiullah Jan’s whereabouts at the earliest.

Human Rights Minister Shireen Mazari in a tweet said she had been informed of the incident. “Have taken note and spoken to the Islamabad IGP, who informed me they are looking into it. Very disturbing," she tweeted.

Just informed about @Matiullahjan919 kidnapping. Have taken note and spoken to the IG Islamabad who informed me they are looking into it. Very disturbing.

PM’s aide on accountability Shahzad Akbar, in a tweet, said he has spoken to the Islamabad IGP and instructed him for immediate action for Jan's retrieval and registration of FIR.

Unacceptable abduction of @Matiullahjan919 from Islamabad today, have spoken with IG @ICT_Police and instructed for immidiate action for retrieval and registration of FIR.

Science and Technology Minister Fawad Chaudhry also voiced concern over the incident, saying he expected the Islamabad Police and intelligence agencies to leave no stone unturned in recovering the senior journalist.

The Pakistan Muslim League-Nawaz has also condemned the “abduction” of the senior journalist.

PML-N president Shehbaz Sharif in a tweet warned that “if something happens to Matiullah, PM will be held responsible”.

Disappearance of senior journalist Matiullah Jan is highly condemnable & matter of deep concern. The government's campaign to muzzle the media & critical voices is simply shameful. If something happens to Matiullah, PM will be held responsible.

Speaking on the floor of National Assembly, Khawaja Asif said Matiullah Jan was constantly making efforts for the freedom of the press. "His abduction at this time is an attempt to silence the voice of the media,” he said.

PPP chairman Bilawal Bhutto Zardari also voiced concern over the incident, saying he is "extremely concerned" at the news of Jan's alleged abduction.

"The selected government must immediately ensure his safe return. This is not only an attack on media freedoms and democracy but on all of us," he wrote on his official Twitter handle.”Today it is Matiullah, tomorrow it could be you or I,” he added.

Extremely concerned at news that @Matiullahjan919 has been abducted from Islamabad. The selected government must immediately insure his safe return. This is not only an attack on media freedoms & democracy but on all of us. Today it is Matiuallah, tomorrow it could be you or I.

“I strongly condemn the shocking and painful abduction of Matiullah Jan, who has always bluntly criticised the government and its different organs for their ill-advised policies, has been targeted to silence his independent voice he often raises in the public interest,” he said in a statement.

“The abduction is a blatant attack on the right and freedom of expression as guaranteed by the constitution, just to suppress neutral and independent voices for the rule of law, fair play, the constitutionalism and democracy.”