Facing a crisis, New York hopes to reinvent itself again

New force will be self-contained - able to deploy solo with all its supporting weapons to fight in distant conflicts. PHOTO: REUTERS
HONG KONG:

China launched its military build-up in the mid-1990s with a top priority: keep the United States at bay in any conflict by making the waters off the Chinese coast a death trap. Now, China’s People’s Liberation Army (PLA) is preparing to challenge American power further afield.

China’s shipyards have launched the PLA Navy’s first two Type 075 amphibious assault ships, which will form the spearhead of an expeditionary force to play a role similar to that of the US Marine Corps. And like the Marines, the new force will be self-contained - able to deploy solo with all its supporting weapons to fight in distant conflicts or demonstrate Chinese military power.

The 40,000-tonne Type 075 ships are a kind of small aircraft carrier with accommodation for up to 900 troops and space for heavy equipment and landing craft, according to Western military experts who have studied satellite images and photographs of the new vessels. They will carry up to 30 helicopters at first; later they could carry fighter jets, if China can build short take off and vertical landing aircraft like the US F-35B.

Chinese military commentators quoted in official media say China’s shipyards are now building and launching amphibious ships so rapidly it is like “dropping dumplings” into water.

The military rivalry between China and the United States is only growing sharper. Last week, US Secretary of State Mike Pompeo declared most of Beijing’s claims of sovereignty in the South China Sea illegal, throwing Washington’s weight behind the rival claims of Southeast Asian nations over territory and resources in the strategic waterway that were supported by international law. China said the US position raised tensions in the region and undermined stability.

China’s nascent amphibious forces still lag far behind those of the United States, but the speed of China’s military rise has already shifted the balance of power in Asia. Over the past two decades, China has deployed an arsenal of missiles and a massive surface and sub-surface fleet to deter potential enemies from sailing in its coastal waters. Now, as part of an accelerated modernisation of the PLA since Chinese President Xi Jinping came to power in 2012, these new amphibious ships and the specially trained marines they carry will boost Beijing’s firepower and political influence far from its shores, according to Chinese and Western military analysts.

As shipyards churn out amphibious vessels, China is expanding its force of marines under the command of the PLA Navy. These troops are being trained and equipped to make landings and fight their way ashore. China now has between 25,000 and 35,000 marines, according to US and Japanese military estimates. That’s a sharp increase from about 10,000 in 2017.

“Without an amphibious force, any military force is greatly constrained in where and how it can conduct operations,” said Grant Newsham, a retired US Marine Corps colonel and researcher at the Japan Forum for Strategic Studies. Newsham advised the Japanese military on the formation of Tokyo’s own Amphibious Rapid Deployment Brigade, formed in 2018. “Jets can drop bombs and ships can fire missiles at the shore - but you might need infantry to go ashore and kill the enemy and occupy the ground.” 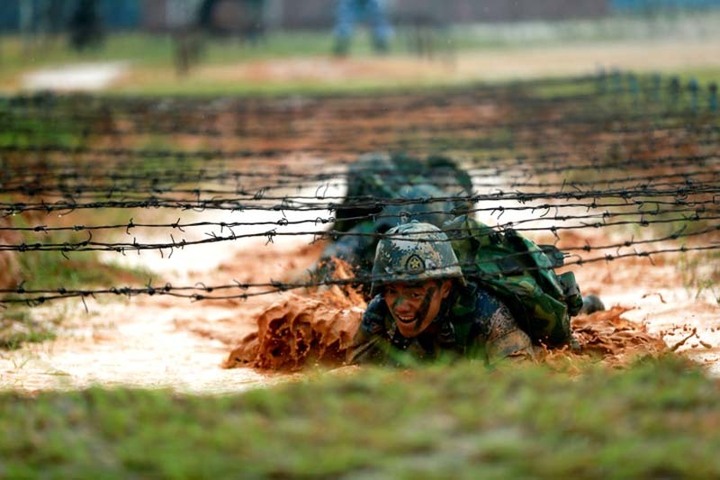 China’s Ministry of National Defense and the Pentagon did not respond to questions from Reuters.

At home, too, the PLA marines have become an important tool in the ruling Communist Party’s efforts to showcase China’s increasingly powerful military to its domestic audience. The state-controlled media regularly reports on the gruelling training and military skills of the Jiaolong, or Sea Dragon commandos - a unit from the marines special forces brigade based on Hainan Island off southern China. 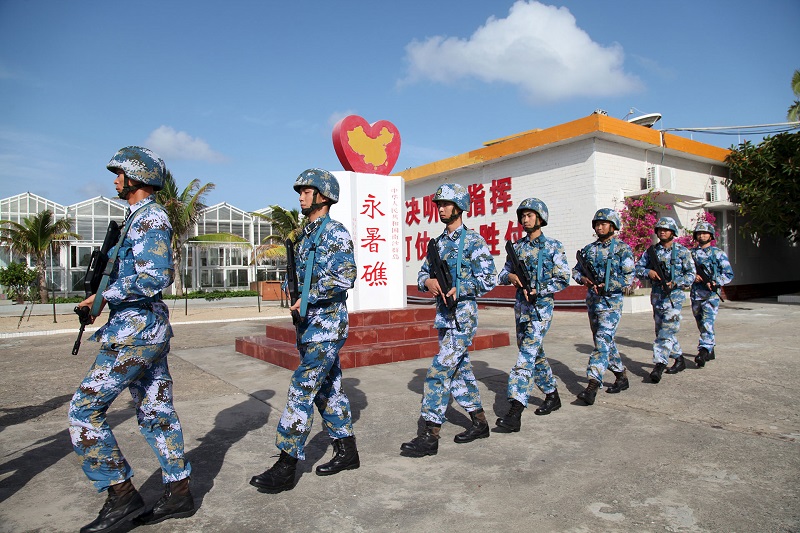 Members of the Chinese navy patrol at Fiery Cross Reef in the Spratly Islands in 2016. China refers to this contested group of islands and reefs in the South China Sea as the Nansha Islands. PHOTO: REUTERS

“We should be the point of the sword in joint operations to strike terror into the heart of the enemy,” said Gong Kaifeng, a Jiaolong commandos company commander, in a report last year on the unit's training broadcast on state television.

When the Type 075 ships enter service, China will have the capacity to combine them with its other new amphibious and support vessels, Chinese and foreign analysts say. These self-contained fleets can be sent to distant conflicts, deployed as a show of force to deter potential enemies or to protect Chinese investments and citizens abroad. They would also allow the PLA to provide disaster relief and humanitarian assistance, competing with the US for prestige and soft power.

For Beijing, these amphibious forces will also contribute to the PLA’s mounting capacity to make a landing on Taiwan or seize other strategically important or disputed territory in China’s offshore regions, according to specialists in amphibious warfare.

Beijing regards self-governing Taiwan a province of China. Xi Jinping has said unifying Taiwan with the mainland is a vital step in realising the Chinese people’s dream of a powerful, rejuvenated nation.

In a key speech early last year calling on Taiwan to open talks on peaceful reunification, Xi warned that this long-standing dispute could not be deferred indefinitely. “We make no promise to renounce the use of force and reserve the option of taking all necessary means,” Xi said.

China has this year stepped up military operations and exercises around Taiwan, according to US and Taiwanese military analysts. PLA Air Force jets, including at least one bomber and a fighter, briefly entered Taiwan’s air defense identification zone on June 22, before being warned off by the Taiwanese air force, the island’s military said. It was the eighth such encounter in two weeks, the military said. 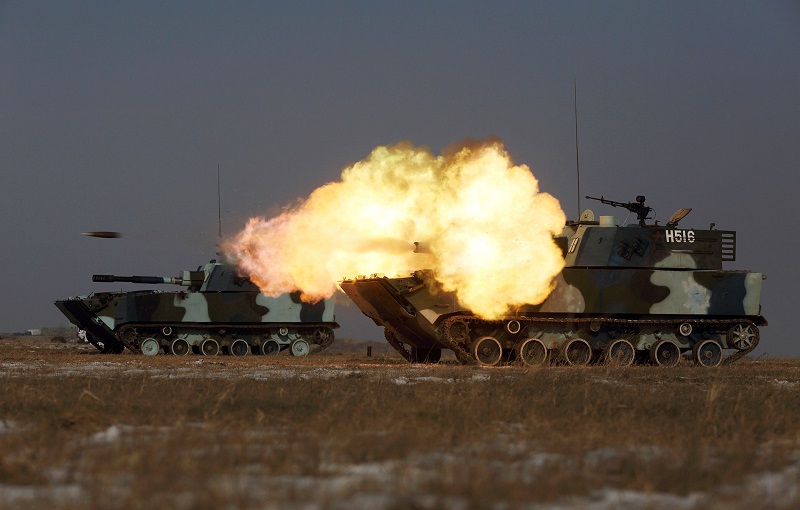 A tank of the People's Liberation Army Navy Marine Corps fires during a military drill at a base in China’s Jilin province in 2015. PHOTO: REUTERS

Taiwan launched its annual Han Kuang defense exercise on July 13 with an emphasis on joint operations between land, sea and air forces to defend the island from attack, according to the island's military. The exercise also involved an expanded role for reservists as the military strives to boost its firepower, senior Taiwan government officials said.

“Our military is always working hard to prepare for war, closely monitoring the dynamics of the Chinese Communist’s military and the development of the situation in the Taiwan Strait,” Taiwan’s Defense Ministry said in response to questions from Reuters. “We have a complete defense plan and appropriate actions to deal with the threat of the Chinese Communists attacking Taiwan and the seizure of offshore islands, which can ensure national security.”