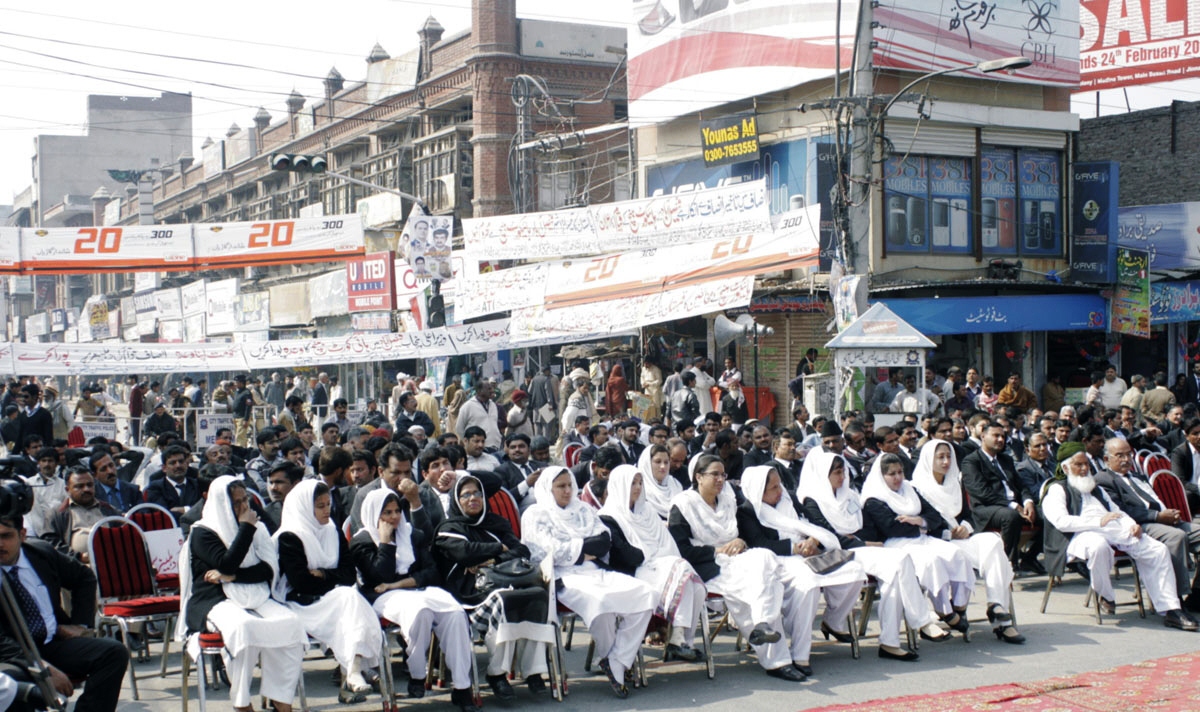 A significant rise in cases of domestic abuse, food insecurity, layoffs and job uncertainty too are some of the outcomes from the crisis that are greatly affecting women and their livelihoods. PHOTO: NNI/FILE
KARACHI:

Leading women lawyers of Pakistan in an online panel discussion by Peace & Justice Network and Women in Law Initiative shed light on the challenges faced by female litigants in their quest for justice amid the Covid-19 pandemic and significant surge in cases of domestic violence and abuse.

Various women’s rights groups and activists worldwide have already expressed concern over the disproportionate impact of the pandemic on women, mainly due to the already existing inequalities in society. A significant rise in cases of domestic abuse, food insecurity, layoffs and job uncertainty too are some of the outcomes from the crisis that are greatly affecting women and their livelihoods.

“It is important to recognise that this pandemic is affecting some groups more than others, and those include women who are facing cuts in access to justice or seeing courts. There are multiple issues besides domestic violence [that they face and wish to seek justice for], such as child custody, divorce, rape, sexual harassment, right to property and so on and so forth,” said Barrister Jugnoo Kazmi who leads Women In Law Initiative Islamabad chapter.

“The crisis is restricting women’s abilities to deploy their usual safety strategies. This obviously does not mean just approaching courts but also not being able to go to shelters,” she said, adding that courts all across Pakistan have been hearing urgent cases or bail matters only due to the pandemic, however, have now started listening to regular cases now.

Kazmi said what constitutes urgent cases varies but believed it “definitely does not include gender related cases”.

Talking about digitisation in case management system especially due to the situation that has prevailed due to Covid-19 outbreak, she added that the Islamabad High Court has launched an e-facility and also introduced an app along with a two-way SMS service facility to assist litigants.

“Courts in Pakistan have traditionally been very slow in embracing technology as they rely too much on in-person appearances. They have struggled to make their services accessible to people lacking lawyers and other legal assistants,” she continued while appreciating the e-court initiative.

Speakers pointed out that along with courts, women can also seek justice and assistance through shelters, online counselling and helplines, emphasising their need and importance in times of Covid.

“The government needs to make arrangements for alternative safe spaces for women facing violence, including shelters,” Kazmi added, while pointing out societal barriers that prevent women from reporting such cases.

Barrister Zahrah Sehr, CEO of Women Lawyers Association,said that the cases are on the rise during the pandemic with women being more vulnerable.

“Men are frustrated, a lot of people are unemployed and that has resulted in women bearing the brunt of that frustration and discomfort,” she said.

She added there weren't any online apps in Sindh to seek help against domestic abuse.

“The problem in Sindh is that although we have helplines, nobody answers,” she regretted. “A lot of time those in need then feel they are helpless [on not being guided through helplines].” Lecturer at Lahore Leeds University Fatima Rizvi said along with helplines, legal aid should be ensured and training should be provided to service providers.

Sehr agreed and stressed sensitising those involved in the process to domestic violence and its repercussions. She recommended making a safe space in every area for victims to seek refuge and escape violence.

She added that there was a lack of shelters for victims and survivors and the government needed to create more such venues for women and children.

“Even if we have lodged an FIR and then need to move the victims from their homes, the biggest problem that arises is that we don’t have enough shelters. There are private ones, already overburdened, and how many can even go there?” she asked, adding that there was no way for victims to connect with someone who could help and even if they do there were too many hurdles along the way.

Advocate PHC ZeenatMohib, while talking about the situation in Peshawar and her province K-P, added that when the Covid had started in March, they pressed on starting e-courts.

“Due to coronavirus, many male and female lawyers got infected. And not many cases were heard due to which various issues are pending and workload has increased,” she said, affirming that had e-court initiative been taken, the burden on courts would have reduced too.

Talking about women lawyers, she said many were at home and going through financial problems.

Mohib added that numerous cases were still being filed during this time with most dealing with maintenance.

She remarked that violence had increased against women during the coronavirus outbreak with most cases coming forward during this time.

“We recently had an acid burn case where an 18-year-old girl was 50 per cent burned, I was appalled to see this,” Mohib said, pointing to the seriousness of the situation.