No end to suffering in Kashmir 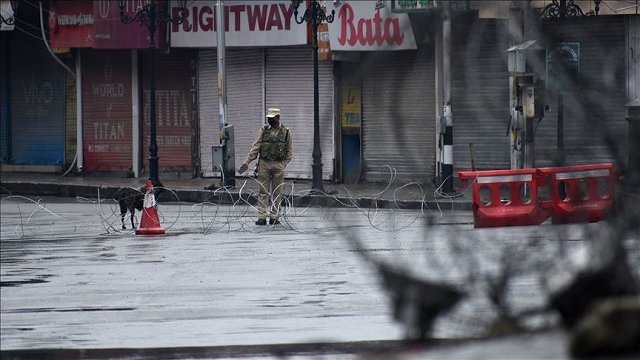 Decades of struggle against an oppressing force has left a generation scarred in the Indian occupied Kashmir. Bloodshed and grief have become an inseparable part of every Kashmiri's life as New Delhi intensifies its clampdown in the valley, once known for its picturesque scenery.

As Kashmir marks the 89th anniversary of Martyrs Day, experts define the occupied territory as a dangerous flashpoint, which has been smoldering for decades.

"Indian atrocities in occupied Kashmir will have dangerous consequences for the region and for India itself," warned Ghulam Muhammad Safi, Convener Tehreek e Hurriyat, Jammu, and Kashmir.

The Martyrs Day, Safi said, serves as a constant reminder of the atrocities committed by New Delhi in the occupied territory. For almost nine decades, the scarred people of Kashmir, he said, have marked the day protesting against India's brutal and unjust occupation of Kashmir.

This year the commemoration comes days after an image of a toddler laying on his grandfather's bullet-ridden body stirred outrage in the Indian-controlled Kashmir. According to media reports, the family members accused the security forces of putting the child on the deceased civilian's body for taking photographs. Images of the three-year-old wearing a blood-stained shirt went viral on social media. In the face of strong criticism,

India's ruling Hindu nationalist Bharatiya Janata Party denied killing the 65-year-old man from Sopore town of Indian-occupied Kashmir. The party received more flak when the spokesperson mocked the picture of the dead Kashmiri in a post on Twitter.

"Perhaps words such as "cruelty", "depravity" and "dehumanisation" fall short in describing the narrative games that the Indian state and its extensions in the media now routinely play over Kashmir," said Mirza Waheed, a novelist, and journalist in his latest opinion piece.

While such atrocities have become a part of everyday life in Kashmir, they end up fueling the desire for independence. "Killings in Kashmir cannot stop the struggle for justice and independence," said President Jammu Kashmir Salvation Moment, Altaf Ahmed Bhat.

The actions of the Modi regime, Bhat said, only strengthen the resolve of the Kashmiri people.

According to experts, the Modi government intensified its tactics shortly after it revoked Kashmir’s semiautonomous status and brought the region fully under New Delhi's control. According to the Human Rights Watch (HRW), India is falling far short in upholding rights in Kashmir.

The New York-based advocacy group paints a grim picture of the situation in the occupied territory. In one of its dispatches earlier this year, Meenakshi Ganguly, the South Asia Director, states that abusive restrictions persist in Kashmir. At one point, Ganguly mentions, more than 140 children were detained in occupied territory. Rights organisations, including the UN, have routinely criticized the Modi government for the violations in Kashmir.

According to CJ Werleman, a journalist and analyst on conflict, India has accelerated its plan to ethnically cleanse Kashmir by flooding the territory with Hindu nationalist settlers and expanding military operations. "This leaves 8 million people on the brink of a human rights catastrophe," he cautioned.  Werleman also criticized the Bharatiya Janata Party government for introducing the controversial domicile law."Evidence for India's violations of international and humanitarian law can be found in the way New Delhi has granted 25,000 domicile certificates to non-Kashmiri natives in the past month," said Werleman, who has recently published a report that documents hate crimes against Muslims in India.

On the heavy presence of the Indian military in Kashmir, Werleman said: "No other population on earth is subjected to the same kind of round-the-clock military surveillance and harassment experienced by Kashmir's indigenous population."More than one million Indian soldiers, he said, have been deployed to suppress fewer than 150 armed anti-Indian occupation fighters.

"But that's the point - the soldiers aren't there to provide security, but rather to crush Kashmiri liberation aspirations."Prime Minister Narendra Modi, according to Werleman, is sorely mistaken if he believes the international community won't exact a heavy political and economic cost on his government's intent to colonize Kashmir."The Black Lives Matter movement has re-energized anti-colonial movements around the world," he said.

"Kashmiris continue to be abducted, tortured, maimed and killed by Indian forces, and the world remains silent," said Dr. Talat A Wizarat, an expert in international studies and foreign policy. Indian aggression and the policies implemented in Kashmir, Wizarat said, were taken from the Israeli playbook.

"You see the same tactics that are being used in Palestine are now being used by Modi in Kashmir," said Dr. Wizarat. "Modi government believes that if Israel can get away with the crimes in Palestine, so can they," she added. The struggle, she said, has been escalated to a point of no return. "The Kashmiri people have no choice but to fight against the brutal occupation," said Dr. Wizarat.Condemning the international community for its silence on Kashmir, Dr. Wizarat said: "The west has adopted the policy of appeasement. They have been bending over backwards to appease Modi just so they can continue to do business with India," she said.

Since its illegal annexation last year, the nationalist government in India has introduced laws and rules to alter the demography of the Muslim-majority territory. "Any change in the demography of Kashmir by the occupying power is a violation of international laws and conventions," explained Dr. Wizarat.

The move has fueled anxiety among the Kashmiri people, who are already enduring the toughest clampdown. For months, Kashmir was completely isolated. Internet connections and phone lines were cut, rendering millions of people incommunicado."For the people of Kashmir, every day is Martyrs Day. The brutal force and restrictions used against them will not deter them from their ultimate objective said," said Dr. Wizarat.

The lockdowns and restrictions the world has witnessed due to the Covid-19 pandemic, she said, has been a reality for Kashmir for decades."The people of Kashmir have been living in a constant state of hopelessness and confinement. That has morphed into a severe psychological crisis," she cautioned.

The Modi regime, she said, is using every trick in their bag, to test the resolve of the Kashmiri people. "They have been subjected to psychological torture for decades," added Dr. Wizarat. "Rape, torture, and the killings are used as weapons against the people of Kashmir," she said.

In the face of violent settler colonialism in Kashmir, the people of occupied territory show no signs of giving up. Out of fear, the Indian government routinely arrests leaders in Kashmir. According to media reports, more than 7,000 people were detained last August.

Shortly after the information blackout in Kashmir, experts believe, many more were arrested."Every Kashmiri has one objective, and that is freedom," said President Jammu Kashmir Salvation Moment, Altaf Ahmed Bhat. "Kashmiris will never accept Indian occupation," he added.

Referring to the events of 1931, when the Dogra army opened fire upon Kashmiri protestors outside the Central Jail in Srinagar, killing 22 and injuring hundreds, Bhat said nothing has changed for the Kashmiri people. “They are still struggling.

”The Martyrs Day, he said, remains a reference point for the Kashmiri freedom struggle against Indian occupation.  "As India attempts to erase the history, the commemoration serves a constant reminder of the resistance movement," he added.