Without security worries, around 800 cyclists show up regularly, says policeman 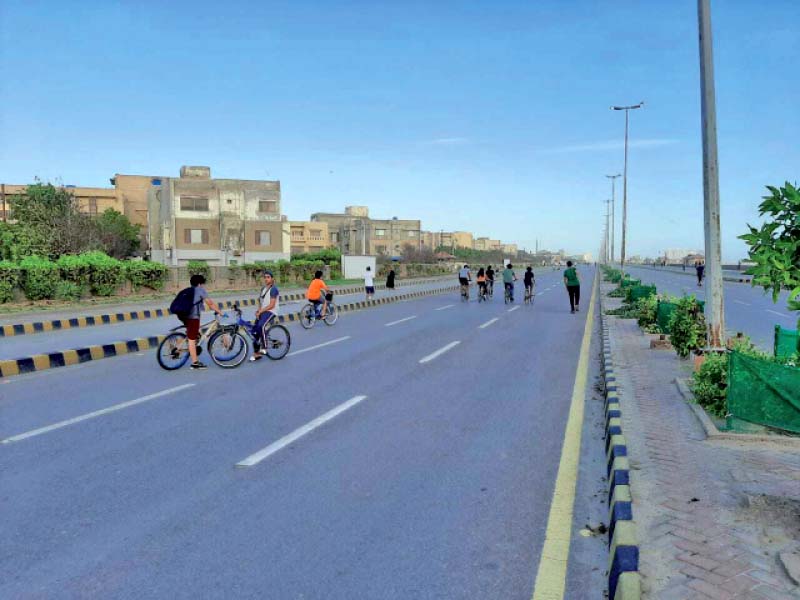 With traffic and most visitors restricted at Sea View beach, those residing nearby have taken the opportunity to reclaim the space, if only for a while. PHOTO: EXPRESS
KARACHI:

Once, Karachi was a different place. Its residents - men, women and children alike - enjoyed more freedom on the roads, dressed as they wanted without fear of catcalling, and walking and cycling was not something out of the ordinary.

However, over the years, all that faded away, with ever-increasing security problems gripping the port city and cars and motorcycles replacing good old bicycles. And so, cycling became a rare sight on the city's streets, only marginally regaining its lost position after some sports enthusiasts took up the practice again a few years ago.

But it took a lockdown to reintroduce the trend more widely in the metropolis and now, it's in full swing in some areas.

Riding along the coast

One newly-found cycling hub is Sea View beach, where scores of cyclists assemble to pedal their way along the breezy coastal track with no interference and no fear.

With the lockdown, the city administration has blocked all routes to the beach and the police deployed in the area allow few visitors. However, cycling enthusiasts are apparently not barred.

Among them is Masroor Khan, who, along with his friends, bikes along the beach for at least two hours each evening.

"There's no fear of snatching or unnecessary comments by strangers amid the lockdown," he said. "We are able to ride freely as there are no rashly driven cars nor throngs of visitors crowding the beach."

According to 16-year-old Sunaif, without a proper cycling track anywhere in the city, the beach is an ideal location for enthusiasts.

He and his friends, Ayan and Muhammad Zaryan, cycle there for at least 30 kilometres daily, and much to his excitement, "the numbers of cyclists visiting the beach is increasing day by day."

Similarly, for Lutaf Ali Mangrio, who purchased a new cycle last month, cycling has turned out to be a leisure activity. "It's great fun and I want to continue it even after the lockdown is lifted."

Police officer Abdul Karim Tanoli, who is deployed at the beach, estimated that around 800 people show up regularly to cycle along the beach from 6pm to 11pm.

"But the number is increasing," he said, adding that citizens preferred to cycle there as they felt safer with the police presence.

How long this sense of security will last, though, is a question that remains unanswered.

"I fear there will be no safe space as we have now [after the lockdown ends]," reckoned Mangrio.

And cracks are already showing in the facade. Despite barriers at all entry points to the beach, some still managed to drive their luxury vehicles there, much to others' dismay.

"Parents want their children to learn how to ride a bicycle. They want a safe space for them and such VIP exemptions make them uncomfortable," worried Nazia Hasan, there with her family.

Hobnobbing at the beach

Meanwhile, dozens of people, along with their families and friends, crossed the barriers to reach the beach, some listening to music and others strolling with their pets. But their activities were not limited to just cycling and walking.

"It's a new spot to hang out," explained Sunaif.

Elaborating further, Khan pointed out, "Gyms, schools, clubs and parks are all closed. Our only recreation is to cycle and meet our friends here."

Another visitor, Shahbaz, said that he and his friends had been hanging out at the beach often for the past few weeks. "It's a good way to spend quality time," he commented.

Similarly, Hasan has been telling her neighbours to join her and take advantage of the beach while the lockdown remains in place.

"For the first time in my life, I'm enjoying strolling along the beach with my family, even though it's just a few steps from my house," she said. Observing all the activity, Ali Hassan said that the lockdown had resulted in the residents of Clifton connecting with the beach again. "These same people would normally prefer other beaches due to security and cleanliness. I have never seen then walking on these roads before."