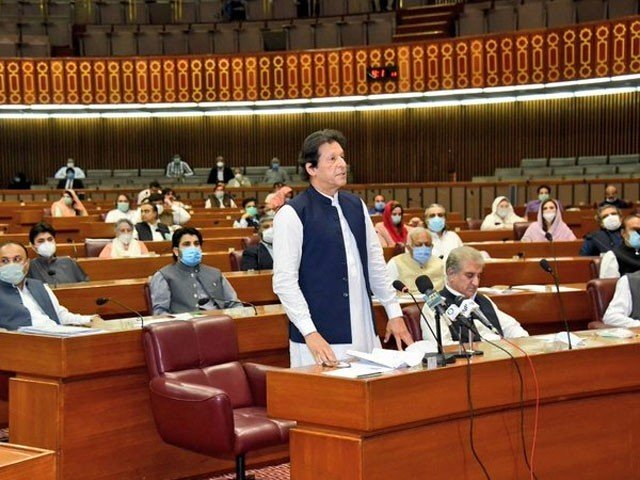 “There is no doubt that India is behind the attack,” the premier said on Tuesday addressing the National Assembly a day after four terrorists armed with assault rifles and hand grenades tried to storm the PSX.

Police and security guards posted at the building had foiled the gun-and-bomb attack, killing the assailants during an eight-minute battle. One policeman and three guards were martyred and seven others, including three policemen, were injured in the attack.

Outlawed Baloch Liberation Army (BLA) had claimed responsibility for the attack in a post on microblogging site Twitter. However, according to Reuters the claim could not be verified as spokesmen for the group were not available for comment.

“The neighbouring country wants to destabilize Pakistan and the PSX attack was planned just like the Mumbai attacks,” the prime minister added.

In the attacks which lasted four days at least 174 people had died and more than 300 had sustained wounds. India had accused Pakistan of being behind the attack, a charge that Islamabad had vehemently denied.

The prime minister said the PSX attackers wanted to take hostages in Mumbai attacks style as they aimed to create an atmosphere of ‘instability’ in Pakistan.

He said the heroes averted a big incident “which was meticulously planned". He told the house that Hassan Ali's sister also died of heart attack when she heard news of her brother’s death.

PM Imran said the attackers had a big cache of arms and ammunition and they had a plan to go for a rampage in the stock exchange. “For the last two months, all our agencies have been on high alert. Four terrorist attacks have already been averted by the intelligence agencies,” he revealed.

He said the law enforcing agencies were fully prepared but one can't stop such an incident despite putting all efforts. Even the most powerful armies and agencies can't completely stop such attacks.

“However, it was a great victory for our country,” he said.

Earlier, he thanked his team for their efforts which led to the passing of the budget 2020-21 on Monday. Referring to fears surrounding the budget, he said there were a lot of speculations. “If you were watching the TV a day before the budget was approved, you would have thought it was our last day.”

He discussed the difficulties the government faced while preparing the budget, saying coronavirus pandemic has affected the economy and the tax collection target had to be revised. He lauded his economic team, women MPs, minorities and the allies for helping the government to pass the budget.

On the government's policy for lockdown while simultaneously reaching out to the poor, he appreciated his aide on social protection Sania Nishtar for distributing emergency cash among the people.

Imran said people who get government salaries are not affected by a lockdown but wage earners do. He said the stipend distributed among 1.2 million families must have been spent and the government is now planning to provide more financial help to people affected by the economic crisis.

The premier said the tourism sector, small private schools, working class and the services sector are the worst affected by the pandemic. He said the power sector has been a scourge for the country for the last one decade. “Major changes will be made in the power sector,” he announced.

He said the Pakistan Steel Mills, the Pakistan International Airlines (PIA) and the Pakistan Railways are running on loss and the government has paid Rs34 billion in salaries to the employees of non-functional PSM alone since coming into power.

“The PPP that destroyed the PSM is now talking about its restoration,” he said.

Speaking about the PIA, he said, it has seen 10 chief executives in the last eleven years.

"A [sports] team is also ruined if its captain is changed so often," said Imran using sports analogy. “The country cannot move forward without reforms. It was about time to take decisions.”

Speaking about the mafias and cartels, Imran said he often thought why the former prime minister Nawaz Sharif and the former president Asif Ali Zardari own sugar mills.

“The sugar mills were set up to whiten their black money. But the government would go after the exploiters. Mafias could not operate unless governments backed them,” he said.

He revealed that the sugar industry pays Rs9 billion in taxes while it takes a subsidy of Rs29 billion, adding that the government will bring all ‘mafias and monopolists' under the law as it is the government's mission that people should make money but pay taxes as well.

In the first Muslim state of Medina, he said, Zakat was taken from the elite and given to the poor.

Referring to PML-N's Khawaja Asif, he said when Asif visited the US as the foreign minister and asked to differentiate between the PML-N and the PTI, he had said the PML-N is liberal party and the PTI is close to religious parties.

Since 1998, he said, the political leaders have been asking the west to protect them because they are liberals and their failure would allow the extremists to take over the country.

“Take out any of their statements and you will find that they become moderate and liberals when they go to the west. They don't have any faith,” he said.

Imran also quoted Charles Dickens' historic opening lines from his novel ‘A Tale of Two Cities': It was the best of times, it was the worst of times. “The country has to make the best of these times by calculated and effective measures,” he said.