Death toll from the virus stands at 3,931 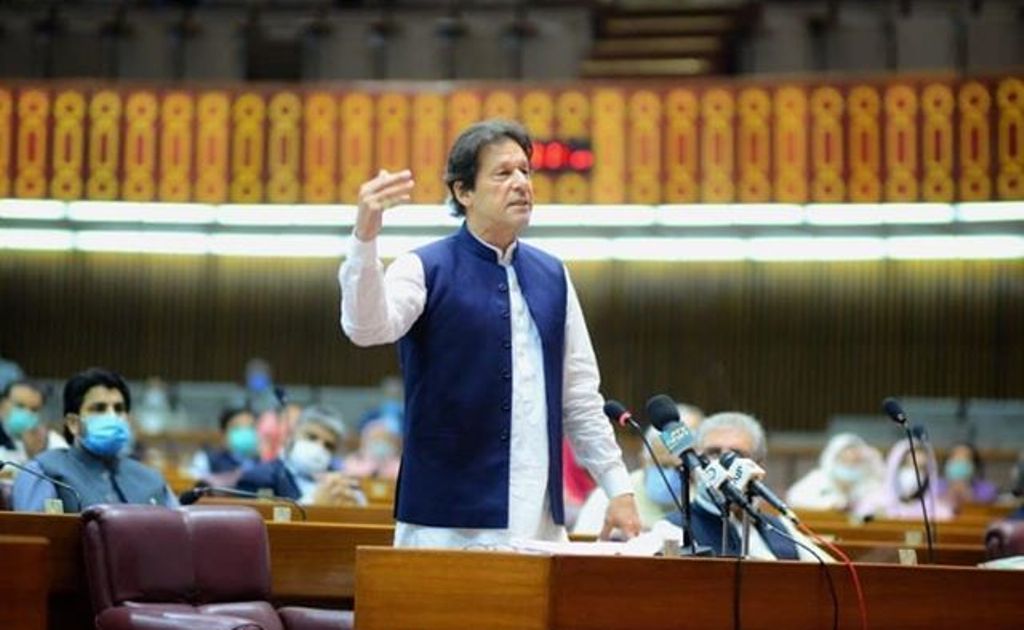 Prime Minister Imran Khan addresses a National Assembly session on Budget 2020-21 on June 25, 2020. PHTO COURTESY: FACEBOOK/@ImranKhanOfficial
ISLAMABAD / KARACHI / PESHAWAR / LAHORE / QUETTA / MUZAFFARABAD: The novel coronavirus emerged in the central China city of Wuhan towards the end of last year and proliferated to almost the whole world within a couple of months. It’s not the virulence or fatality, but the infectivity of the new virus – also known as SARS-CoV-2 – that has set off a global frenzy.

The Covid-19 respiratory illness caused by this mysterious contagion has so far infected more than 9.1 million people in 202 countries and territories of the world – and over 472,000 of them have died and counting.

Nearly one-and-a-half months after imposing the lockdown across the country, Prime Minister Imran Khan announced to ease the lockdown in phases.

The virus has claimed at least 3,931 lives while around 82,926 coronavirus patients have recovered.

12:34am: Even as Sindh boosts capacity, fewer get tested for Covid-19

There have been awareness drives, lockdowns and whatnot but trends show people are still wary of getting themselves tested for the coronavirus.

While the Sindh government claims to have boosted the testing capacity in the province to 18,000 tests per day, the number of tests conducted daily has hardly crossed the 6,000 to 7,000 mark in recent days.

On Thursday, a mere 6,458 tests were reported by the provincial chief minister, yielding 1,098 positive cases, even though past weeks had seen the number of tests conducted in a day soar past 13,000. With fewer tests, there has been a decline in the number of new infections detected too.

At least 33 new cases of the novel coronavirus emerged in Gilghit-Baltistan, bringing the total number of cases to 1,398.

As many as 999 patients have recovered from the contagion in the region so far.

The novel coronavirus has infected 32 more people in Azad Jammu and Kashmir, taking the total number of cases to 962.

According to health authorities, six more patients have also recovered from the contagion, bringing the total recoveries to 396 in the region.

At least 129 more cases emerged in Balochistan in the last 24 hours, bringing the tally to 9,946.

The virus has claimed one more live in the province, pushing the total number of fatalities to 109.

According to health authorities, 3,737 patients have also recovered from the contagious disease so far. 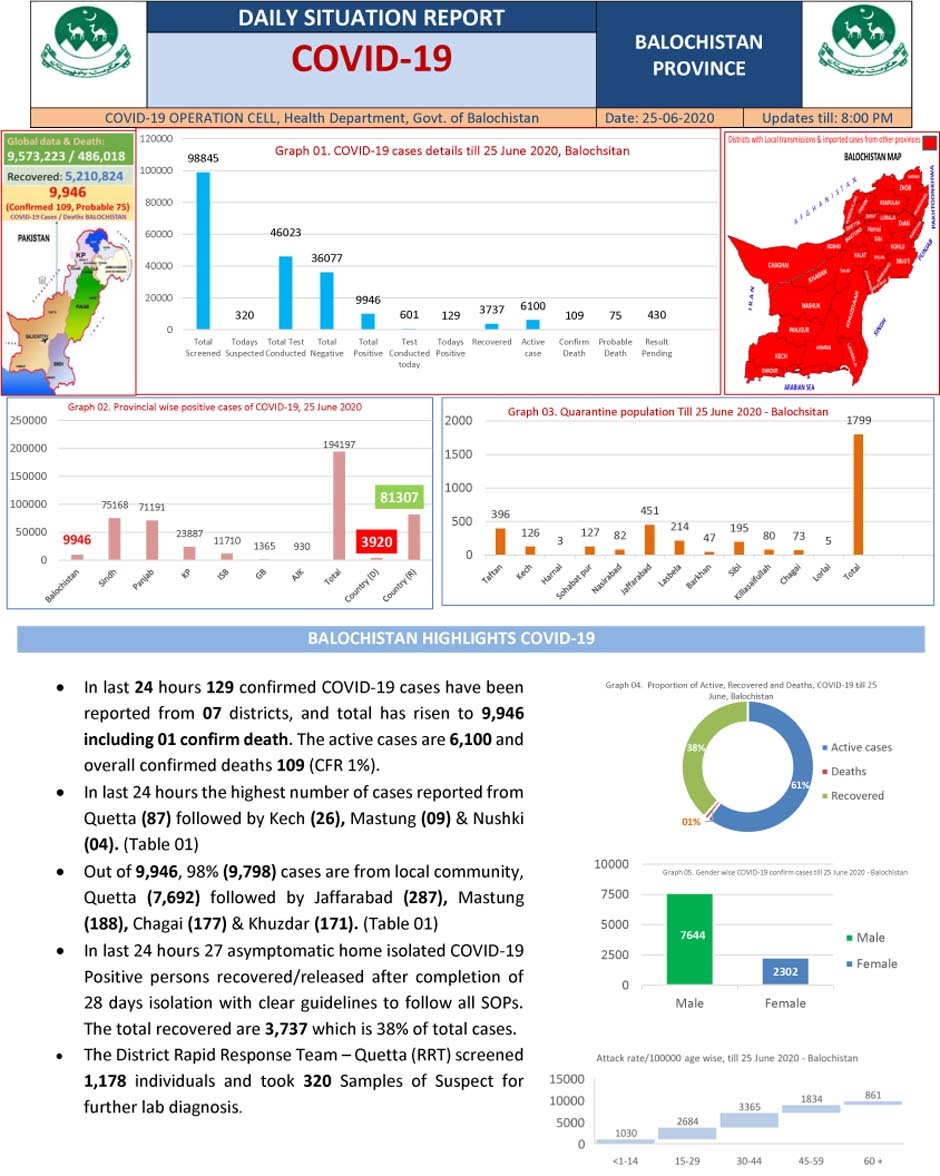 At least 416 people have infected with the novel coronavirus in Khyber-Pakhtunkhwa (K-P), pushing the provincial tally to 24,303.

The contagion has claimed another 10 lives, bringing the fatalities to 879 in the province.

According to health authorities, as many as 352 people have also recovered from the virus.

Prime Minister Imran Khan once again reiterated that the Pakistan Tehreek-e-Insaf (PTI) government inherited a poor economy when it came to power in 2018, while addressing a National Assembly session on Budget 2020-21 on Thursday.

Responding to accusations by the opposition that the PTI-led government is ‘hiding behind coronavirus’, the prime minister said that it was not just Pakistan but the whole world was going through a crisis.

“We inherited an economy with $20b current account deficit,” he said. “This was the worst deficit in our history. Our exports were stagnant but our imports were more than $60b,” observed the premier.

Talking about the country’s liabilities, the PM said that the first year of PTI was the most difficult as it had to pay off debt acquired by the previous government.

“I have been the one to raise funds all my life, and I have not been ashamed of asking for money from Pakistani nationals,” said the PM. “What I am ashamed of is when we ask for money from other countries to pay a debt that was not due to us.”

According to a statement released on Thursday, Sindh Governor Imran Ismail donated personal protective equipment to doctors at the Abbasi Shaheed Hospital on the request of Mayor Karachi Waseem Akhtar.

The gear provided include 1,000 protective suits, 3,000 masks and 10 cartons of sanitisers.

Governor Sindh observed that the PPEs will facilitate the doctors in performing their duties against Covid-19 properly.

Moreover, 17 people passed away in the past 24 hours taking the death toll to 1,178 in the province.

6,458 tests were conducted on the previous day while 1,267 more people said to have recovered from the virus in the province

Singer-turned-politician, Abrarul Haq, has revealed that he has been recovered from Covid-19. The PTI leader took to Twitter to share the news on Wednesday.

“Alhamdulillah, I have been tested corona negative and today is my 1st day in the office after quarantine,” the singer-turned-politician wrote. “Thanks to all those who prayed for my success. May Allah SWT bless all the patients with quick recovery and keep everyone safe. Ameen.”

In a tweet, he said the Ministry of Industries has held a meeting with major oxygen producers and reached a decision with them in this regard.

The minister said three additional oxygen plants in the private sector will also be coming into production within next two weeks.


The Ministry of Industries has held a meeting with major oxygen producers and reached a decision with them to supply/redirect oxygen to HealthCare on a first priority basis.

3 additional oxygen plants in the private sector will also be coming in production within next 2 weeks.

Special Assistant to Prime Minister on National Security Division Dr Moeed Yusuf has expressed hope that all Pakistani laborers, especially in the Gulf countries, will be able to return to the country in next few weeks.

Giving a media briefing in Islamabad on Thursday, he said all airlines have been allowed to enter into Pakistan and 270 flights are expected to land in the country from June 26 to 30 of this month.

Dr Moeed Yusuf said screening process will be started from Saturday for outbound passengers from Pakistan. During this process, the passengers will be checked for body temperature and other ailments. He also advised the outbound passengers to travel only if they are completely healthy in order to satisfy the requirements of their destination countries.

He said prime minister has given special instructions to take care of overseas Pakistanis.

At least 250 Indian nationals, stranded in the country due to the Covid-19 lockdown, will return to their country on Thursday.

The first group leaving today will cross the Wagah border followed by the second and third group in the following days.

In total, 748 Indian citizens were stranded in Pakistan.

The Indian nationals had come to Pakistan to meet their relatives and perform religious rites, but could not return due to lockdown and the subsequent closure of the international border.

Ninth consignment of protective equipment for doctors has been dispatched to the provinces.

According to a spokesperson of National Disaster Management Authority, Sindh has been provided 200,000 surgical masks and 45,000 ICU masks of various types.

11:40am: PM warns of increasing burden on hospitals if people don’t follow SOPs

Prime Minister Imran Khan has warned of increasing burden on hospitals and existing health facilities if the people do not follow SOPs.

Talking to volunteers of Corona Relief Tiger Force in Islamabad on Thursday, he said it is essential to make common people understand the importance of following precautionary measures.

He said if people follow the SOPs in letter and spirit, the spread of disease could be curtailed. He said next one month is crucial and if we are able to convince people to adopt maximum precautionary measures, the peak of the disease could pass.

As many as 8,0837 violations of health guidelines /instructions were observed across Pakistan during last 24 hours.

According to the NCOC, more than 887 markets/ shops, seven industries units were sealed and 1,513 transporters were fined/ sealed. Details of Violations of health guidelines across Pakistan and enforcement measures as under:

11:00am: Sheikh Rashid recovers from coronavirus

The federal minister will be discharged from the hospital and will move back to his house.

In his message, Rashid thanked the prime minister, chief of army staff and the people for their good wishes.

According to an official handout, the Gadani Ship Breaking Yard service was restarted on the special instructions of Balochistan Chief Minister Mir Jam Kamal Khan.

9:45am: Smart lockdown expanded to posh areas in Lahore

Punjab Health Minister Dr Yasmeen Rashid said on Wednesday that several more areas of Lahore are being placed under complete lockdown for a week to curb the spread of the novel coronavirus pandemic.

She said while addressing a press conference that important areas, including Gulberg, Model Town, Garden Town, Faisal Town, DHA, Gulshan Ravi and Walled City, will be sealed for one week.

Dr Rashid said Punjab government was following the advice of the World Health Organisation (WHO) regrading the treatment of coronavirus patients and burial of victims.

She said the decision regarding reopening educational institutions would be taken after comprehensive consultations and review of all aspects related to the issue.

The death toll from the virus stands at 3,903 with 148 deaths reported over the last 24 hours. 21,835 corona tests were carried out during this period.

81,307 patients have so far recovered from the disease.

Special Assistant to the Prime Minister on Overseas Pakistanis Syed Zulfikar Abbas Bukhari has said that the government has launched a special portal to help overseas Pakistanis who have lost their jobs abroad and are facing difficulties.

Talking to PTV News, he said we have not opened up flight operation completely but the government is trying its best to bring back maximum number of vulnerable Pakistanis stuck abroad.

He said during journey, all passengers would have to follow the SOPs issued by Ministries of Health and Civil Aviation.

The special assistant said the government is also preparing a comprehensive policy to open tourism in the country.

8:00am: New survey for Ehsaas Emergency Cash Programme to be conducted in Waziristan

The federal and Khyber-Pakhtunkhwa governments have agreed to carry out a new survey in South and North Waziristan districts to enlist maximum deserving families for financial assistance under Ehsaas Emergency Cash Programme.

The understanding came during a meeting between Special Assistant to the Prime Minister on Poverty Alleviation and Social Safety Dr Sania Nishtar and K-P Chief Minister Mahmood Khan in Peshawar.

They decided to finalize a feasible work plan for this purpose.

The chief minister said the process of cash distribution in the province under the Ehsaas programme has almost been completed in transparent manner and only deserving families fulfilling the set criteria benefited from the relief package.