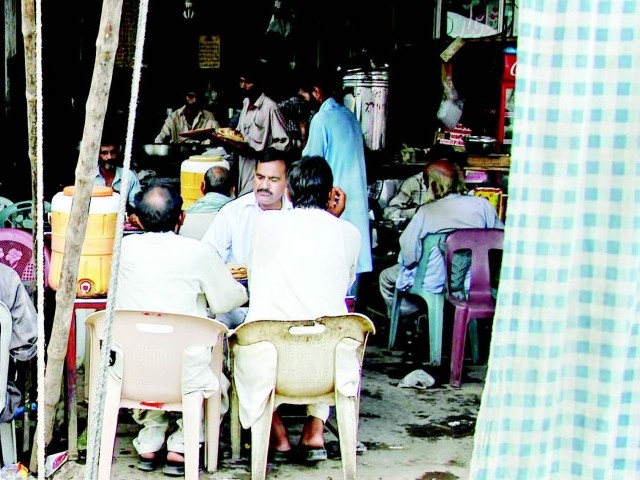 Two men were arrested in Sargodha on Thursday on charges of eating in public places. Cases were registered against three men for serving food at their restaurants.

Tehsildar Malik Saleem Awan arrested Usman and Abdul Shakoor for eating in public during raids on restaurants in Sillanwali. Mohsin Waqas, the restaurant owner, was fined Rs3,000 for serving food during fasting hours. Cases were also registered against Tariq Mehmood and Muhammad Naeem after Sillanwali police found the two serving food at their roadside stalls.

Sargodha DCO Azam Mahmood on Thursday issued directives for district administration to ensure implementation of the Ihtaram Ramazan Ordinance of 1981. The ordinance prohibits eating and smoking at public places. Restaurants are not allowed to serve food after sehar and before iftar. Cafeterias and restaurants in hospitals, railway stations and bus stands are exempt under the ordinance. Violation of the ordinance can be punished with a fine and a maximum of three-month prison term. Under the ordinance, theatres and cinemas can open for three hours a day after the iftar.

Samples of food items being sold at a Khanpur Ramazan Bazaar were sent to Food Laboratory on orders of Provincial Prisons Minister Muhammad Iqbal Channar. Earlier, Channar expressed dissatisfaction with the quality of vegetable oil available at the bazaar. He directed the administration to immediately replace the stock with better-quality oil.

Channar also reprimanded Assistant Commissioner Ameen Owaisi and Tehsil Municipal Officer Ijaz Ateeq for poor sanitation at the bazaars. AC Owaisi said he had taken charge of the office only five days ago and was not aware of the situation. Talking to the media after the visit, Channar said the government was ensuring proper monitoring of prices and quality of food items at Ramazan Bazaars. He directed Market Committee Administrator Rao Muhammad Zafar, PML-N workers Rao Waseem and Abdullah Qureshi to visit the bazaar and report any irregularities to him every day.  Channar also visited Ramazan Bazaars in Bahawalpur.

Talking to The Express Tribune, several Sadiqabad residents complained that all essential items were not available at the Ramazan Bazaars. They said most vendors did not bother about displaying price lists and were charging more than prices set by the government. A food inspector said they were monitoring prices and quality of items. About non-availability of essential items, he said only the items prescribed by the government were available at the bazaars.

Residents of Nowshera also complained about high prices at the only Ramazan Bazaar in the city. They said no separate arrangements were made for a bazaar. “The fruit and vegetable shops in the city have been given the status of Ramazan Bazaar,” they said. They alleged that there had been no effort by price control magistrates to monitor prices at these shops.  Price magistrates said the tehsil municipal officers were responsible for monitoring prices at these shops.

‘No iftar arrangements in Sadiqabad’

No arrangements have been made by Sadiqabad district administration to serve iftar at the Wheat Market and Tableegi Markaz so far. The two sites were identified by the provincial government for establishment of dastarkhwans to provide free-of-charge iftar. Several residents have complained that iftar arrangements are made at Tableegi Markaz every year by citizens on self-help basis. They said it appeared that the administration had selected the Markaz as its Dastarkhwan point to claim credit for private charity.