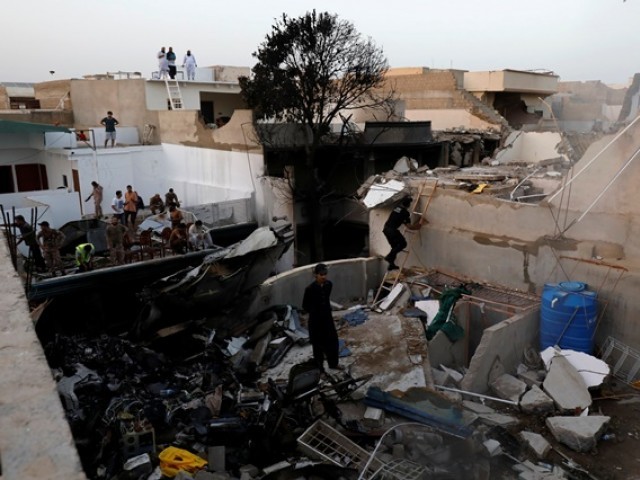 People stand on a roof of a house amidst debris of a passenger plane, crashed in a residential area near an airport in Karachi, Pakistan May 22, 2020. REUTERS

KARACHI: “We’re returning back, sir, we have lost engines,” the pilot of PIA flight PK8303 told the control tower at the Karachi airport in a tragic call moments before sending a Mayday, according to a recording posted on monitoring website liveatc.net.

The pilot said the eerie words after the control tower cleared his Airbus A320 to land on either of the airport’s two West-Southwest-facing runways but the jet appeared to be off-course for its second attempt at landing.

“Mayday. Mayday. Mayday.” The pilot said 12 seconds later before his plane with 99 people – including eight crew members – on board crashed into the densely-populated Model Town neighbourhood on Friday. The crash triggered on the ground and caused significant damage to the private property.

Two passengers miraculously survived the deadly crash. The Sindh health ministry confirmed at least 85 deaths past midnight. Fifty-three bodies were at the Jinnah Postgraduate Medical Centre and 32 at Civil Hospital. Most of the victims are charred beyond recognition. Only 19 of them could be identified.

“We deeply regret to announce that a PIA flight PK-8303 from Lahore to Karachi (Aircraft Airbus A-320) registration (AP-BLD) crashed near Karachi Airport at 14.39 hrs PST today,” the national flag carrier said in a statement after the crash.

Rescuers from the military, Rangers, police and civilian volunteers, rushed to the site of the crash immediately, witnesses said. They shifted the casualties to different hospitals of the city.

According to the witnesses, smoke billowed at the scene where some roofs were caved in and debris scattered in streets as ambulances rushed through chaotic crowds of people. “The plane first hit a mobile tower and crashed over houses,” a witness, Shakeel Ahmed, told Reuters.

“The plane came down so fast. I could not understand at the first moment what was happening,” another witness, Rana Jawed, told Anadolu Agency. The plane, he added, had caught fire before it fell down following a “deafening explosion”.

Soon after the crash, residents also joined the rescue efforts as firefighters put out the fire. To speed up relief and rescue efforts, the Army Urban Search and Rescue Team with special equipment and rescue specialists flown from Rawalpindi, the military said.

Narrow alleys in the neighbourhood posed a challenge to rescue efforts. Ambulances faced difficulties in the streets amid huge presence of the local people. Additional challenges surfaced after the sunset and nightfall.

The Inter-Services Public Relations (ISPR) said in a statement, 10 fire tenders were employed at the site and had extinguished the fire. “Military ambulances are busy in rescuing injured and providing necessary medical care,” it added.

The National Disaster Management Authority (NDMA) also instructed all the urban search and rescue teams to reach the crash site, a spokesperson said. The NDMA was also in touch with the local administration, local army corps and aviation authorities for rescue operation.

The plane, which the tracking website FlightRadar24.com said was a 15-year-old Airbus A320, had been leased from China, an official told The Express Tribune. It had taken off from Lahore at 1 pm, with 91 passengers – 51 men, 31 women and 9 children – and was scheduled to land at Karachi at 2:45pm.

There was no official word about the cause of the crash so far, but it appeared that the plane’s both engines failed. PIA spokesperson Abdullah H Khan said it would be early to comment on the possible causes, but added that the plane was not old, and was “well-maintained”.

“The last we heard from the pilot was that he has some technical problem,” Khan said in a video statement. “He was told from the final approach that both the runways were ready where he can land, but the pilot decided that he wanted to do (a) go-round … It is a very tragic incident,” he added.

A spokesperson for the Pakistan Airline Pilots Association (Palpa), said the cause of the crash “will only be determined after the black boxes are opened” but according to the communication obtained from the air traffic control (ATC) it “seems that the airplane lost power”.

The spokesperson added that the airplane was gliding as it approached the runway and “it couldn’t make it to the runway unfortunately […] when the pilot was asked to ascend to 3,000 feet, he said he is trying to maintain altitude but is unable to”.

A civil aviation official, Abdul Sattar Khohar, told Reuters the pilot was informed that he could land at the Karachi airport, but he took a circle and gave a Mayday call before the crash. We don’t know yet whether he gave any reason at the time of the Mayday call.”

Palpa General Secretary Captain Imran Narejo said in a statement that the flight’s captain, Sajjad Gul had 24 years of service experience. “As per the communications between the pilot and air traffic control, it can be ascertained that the airplane had developed a technical fault and it was unable to land.”

He added that the real reason of the crash could only be determined after a thorough investigation. “We appeal to the PIA management and the government to immediately order an inquiry into the incident and make its report available as soon as possible,” he said.

The prime minister has ordered immediate inquiry into plane crash. In a tweet, Imran stated: “Shocked & saddened by the PIA crash. Am in touch with PIA CEO Arshad Malik, who has left for Karachi & with the rescue & relief teams on ground as this is the priority right now. Immediate inquiry will be instituted. Prayers & condolences go to families of the deceased.”

Later, the Aviation Division formed a four-member committee to investigate the PK8303 accident. According to a notification Air Commodore Usman Ghani, President of the Aircraft Accident and Investigation Board (AAIB), would head of the investigation.

More than 700 apply for GCF grant