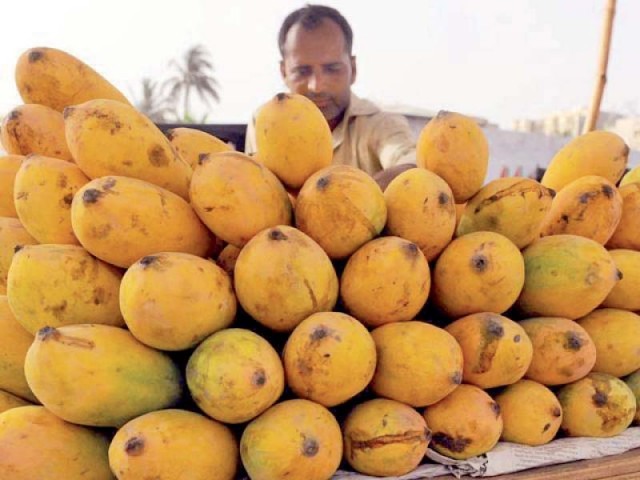 The ability of mangoes to fight diseases is deteriorating due to natural factors, which are causing a drop in production. PHOTO: FILE

KARACHI: The export of Pakistani mangoes is in jeopardy due to coronavirus pandemic coupled with devastating impact of climatic change on agriculture in the country.

The lockdown in mango-importing countries has triggered a sharp decline in the demand for Pakistani mangoes while a virtual halt to flight operations and an extraordinary hike in freight charges pose harrowing problems for exporters.

Keeping all this in view, All Pakistan Fruit and Vegetable Exporters, Importers and Merchants Association (PFVA) has slashed the export target of mangoes to 80,000 tons this year compared to last year’s target of 130,000 tons.

Accordingly, Pakistan’s foreign exchange earnings from mango export are set to dive from $90 million last year to $50 million this year due to low shipments expected this year.

PFVA Patron-in-Chief Waheed Ahmed said the current mango season was in a state of massive uncertainty in the wake of coronavirus pandemic, hence, mango export was anticipated to fall 40% compared to the previous year.

The global pandemic has forced major importers of Pakistani mangoes including European states and the US to enforce shutdowns, which have pushed down international demand for the fruit.

Owing to the suspension of flights, shutdown of tourism industry and shopping malls because of the strict global lockdown, there has been a significant drop in the demand for various commodities and the demand for mango is likely to be affected equally.

On the other hand, airlines have hiked freight charges threefold due to suspension of their operations and as a result charges for mango transport to Europe have soared from Rs175 per kg last year to Rs550 per kg this year.

In addition to this, freight charges for Gulf countries have been increased from Rs80 per kg last year to Rs240 per kg this year, which has multiplied the cost of mango export consignments.

Of the total export of mangoes, 55% was transported through sea route, 20% via air and the remaining 25% by land. However, due to the sharp increase in freight charges by the airlines, the export of mangoes via air was feared to fall 70% this year, Waheed cautioned. On the other hand, the export of mangoes to Iran and Afghanistan via land is likely to encounter some other difficulties arising from the closure of borders for implementing precautionary measures in the wake of Covid-19.

The flight operation to several countries, which import Pakistani mangoes, has not been restored yet and flights are currently operating with changed schedules, which further add to the woes of local mango exporters.

“Even if Pakistani mango exporters send the fruit to Europe after paying skyrocketing freight charges, there is no guarantee that the shipments will be cleared on time and reach consumers,” he said.

Apart from the fresh mangoes, the export of value-added mango products such as mango pulp has also started declining while domestic consumption has dropped significantly.

Owing to the closure of hotels, academic institutions, tourist sites and shopping malls, the demand for juices has dropped remarkably, which has caused a drastic reduction in the consumption of mango pulp.

Countries, which import mango pulp from Pakistan, have already curtailed their orders while on the other hand, due to a reduction in the consumption of juices, a 35% reduction is feared in revenue generation from the export of mango pulp.

According to Ahmed, the impact of climate change on agriculture was being felt for the past five years, resulting in lower yield and now the mango crop is taking two additional weeks to ripe, hence, the harvesting period has increased. With all these challenges, the ability of mangoes to fight diseases is also deteriorating due to natural factors, which are causing a drop in production.

Punjab, which produces 70% of all mangoes in the country, has seen a shortfall of 35% this year while the production in Sindh dropped 15%.

“It is unfortunate that no sincere efforts have been initiated to undertake research and development work to analyse the negative impact of climatic change on the agriculture sector in general and horticulture sector (fruits and vegetables) in particular,” he said. He was of the view that growers and farmers could be provided guidance through research to help them avert financial losses from low production.

He pointed out that mango-exporting companies had never encountered such a depressing situation as they were facing now.

“Mango exporters have turned cautious now and they are taking each step with critical analysis of the prevailing situation,” he said. “Exporters have changed their strategy for mango exports by air due to an abnormal increase in freight charges and instead they are switching most of their exports to the sea route.”