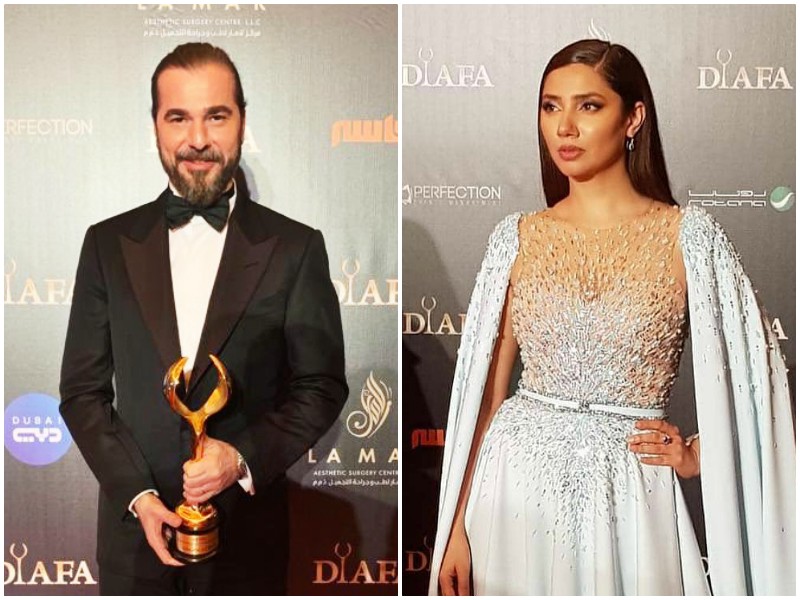 But since Dirlis: Ertugrul had not been introduced in Pakistan then, people did not bother noticing the two celebrities had crossed paths in 2019.

Khan was honoured with an award during the ceremony for her contribution to Pakistani cinema and for making her way into Bollywood with Raees and Shah Rukh Khan. DIAFA further elaborated on her humanitarian work in and outside of Pakistan, while praising her roles in various projects.

After receiving the award she said, “I always say that when we win awards outside of our country, it feels way more special because it’s like our country is winning the award. So I would want to thank Dubai, since it is also very special to me. I would just like to reiterate that art is one of those things that transcends borders and this award is for art around the world.”

Whereas Düzyatan had received an award for his role in the most highest rated Turkish series which is now also popular in Pakistan, Dirlis: Ertugrul.

In his speech the actor said, “I would like to thank DIAFA for this prestigious award everyone else for having me here. Everyone has been so kind. This is the best memory Dubai has given me.”

Lol Engin Altan was also there last year at Diafa19 along with Mahira Khan but back then we didn't know him. I was watching Mahira's Diafa videos and in related videos this popped up. #Ertugrul pic.twitter.com/voq4lvY0N8

‘Elite’ renewed for season 4 on Netflix