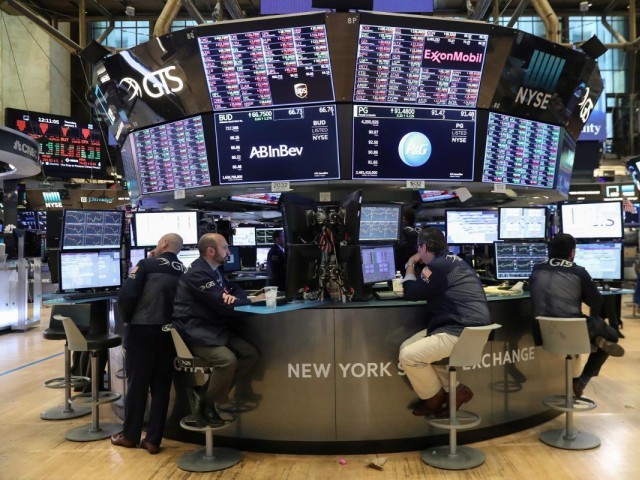 Traders look at price monitors as they work on the floor at the New York Stock Exchange (NYSE) in New York City. PHOTO: REUTERS

LONDON: Stock markets mostly fell on Thursday after rallying for much of the week, with any gains dragged by profit-taking amid concerns over the long-term impact of the virus and worsening China-US relations.

In Europe, approaching the half-way stage, London was down 0.7%, Frankfurt lost 1.4% and Paris dropped 1%.

The euro zone’s economic slump has “likely bottomed out” after the bloc suffered a disastrous collapse under lockdowns to contain coronavirus, a closely watched survey by IHS Markit said on Thursday.

Equities have enjoyed weeks of advances thanks to signs the pandemic is easing in major economies and the gradual lifting of lockdown measures that are expected to have sent the world into a deep recession.

But that optimism has been tempered by uncertainty about the future, while US President Donald Trump has continued to target China over the outbreak and threatened fresh tariffs on the country, fuelling worries of another trade war between the two superpowers.

“The prospect of economies reopening and returning to something that resembles normal has, at times, been very positive for markets, as have positive vaccine and treatment trials, but it hasn’t all been good news,” said Craig Erlam, senior market analyst at Oanda Europe.

“There’s been some setbacks in countries previously lauded for their handling of the spread…, putting more emphasis on the dreaded second wave if the exit strategy isn’t handled properly.